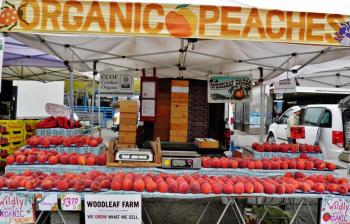 Woodleaf Farm has evolved a system of disease management strategies that work in concert with soil-building and habitat-building strategies to collectively reduce disease risk and the need for pesticide applications (Table 1). Practices include:

The Mediterranean climate of Woodleaf Farm also contributes to low disease risk. Annual precipitation is only 35 inches and occurs mainly in winter, fall, and early spring.

According to Carl Rosato, fruit yield and quality losses to disease have declined over the past 30 years, especially those resulting from peach brown rot and apple scab. Field monitoring and harvest evaluation records support this observation.

Spray records indicate that pesticide applications for disease management have decreased at Woodleaf Farm since 1992, with the exception of materials applied to control fireblight on pears. In the 1990s, wettable sulfur was sprayed at 15–20 lb/A during bloom (two or three applications) for control of peach brown rot, and copper was applied pre-bloom to manage peach leaf curl. Woodleaf stopped using copper-based materials in the mid-1990s. Currently, the only sprays are dormant lime sulfur applications for peach leaf curl. However, Carl also applies mineral mix bloom sprays (with 6-10 lb/A rates of sulfur) for overall tree health and for peach brown rot (Table 3). Though not originally intended to target specific diseases, mineral mix bloom/post-bloom sprays on pears and apples may be helping to manage fireblight and apple scab.

Carl designed a mineral foliar mix spray based on the results of an on-farm brown rot study conducted in the early 1990s, and on concerns about rising soil copper levels due to copper applications for management of peach leaf curl (Fig. 1 and Fig. 2). He tested many materials and application timings; the system continues to evolve based on trial and error.

Application timing has been relatively consistent for peaches over the past 10 years, but is still evolving for pears and apples. Peaches are sprayed during bloom for protection from brown rot. Through 2003, pears and apples were sprayed during bloom. Since then, they have been sprayed from petal fall through first fruit set. In 2015, Carl decided to return to the bloom timing of pear and apple sprays to provide protection from fireblight.

The mineral mix program (recipe, rates, and number of applications) changes each year based on the crop and on weather during bloom (Table 4).

At bloom, from 2004 through 2013, Woodleaf also regularly applied Serenade® (Bacillus subtilis) to apples and pears. In 2014, Serenade® and Blossom Protect™ (Aureobasidium pullulans) were applied three times at bloom. In 2015, Carl abandoned Serenade® and Blossom Protect™ and applied only the mineral mix (once at bloom and twice during petal fall through fruit set). He has decided to change the timing of the mineral mix spray back to bloom based on past results and evidence that products containing rock dust show some efficacy on fireblight when sprayed at bloom. See analysis below.

Susceptible pear varieties were removed and replaced with resistant varieties in 2014 (Table 2).

Carl has been using high carbon/low nitrogen soil amendments since 1992 and soil test records indicate a rise in soil organic matter and a decreasing trend in soil nitrate-nitrogen. Some level of biological control may be generated by the farm's soil amendments and soil-building practices since damage from brown rot and pesticide applications for this disease have decreased over time.

Carl has been practicing soil mineral balancing since the late 1980s. He has worked particularly to optimize cation balance based on his targets for soil calcium, by applying gypsum annually at 250 lb/A. Soil test records indicate that calcium has increased from an average of 1202 to 1524 ppm and now averages 67% of base saturation across all Woodleaf fields . Carl's target for percent calcium is 68%.

The low level of brown rot at Woodleaf is likely due partly to the dry climate as well as to system design and management. Likely contributing factors are row-by-row and in-row cultivar mixtures, as well as excellent sanitation, pruning, microirrigation, and harvest practices. Some level of biological control may be generated by the farm's soil-building practices.

Two bloom applications of a pesticide to reduce blossom and twig infection by the brown rot pathogen is the recommended practice for California peach growers (Adaskaveg, 2010). Woodleaf uses only the foliar mineral mix. The mix typically contains lower rates of sulfur (6–10 lb/A) than those used by neighboring organic growers (15–20 lb/A). According to Carl, micronized sulfur is more effective against brown rot compared to wettable sulfur and may be another reason that he has been able to reduce sulfur application rates. However, recent studies comparing the efficacy of wettable and micronized sulfur do not support this observation (Holb and Schnabel, 2005).

Woodleaf removes fruit remaining on trees in the fall as they become mummies. According to the University of California Statewide Integrated Pest Management (IPM) Program, this practice helps prevent reinfection of blossoms the following season (Adaskaveg, 2010).

There is evidence that sulfur is effective on apple scab when disease pressure is relatively low (Holb, 2001). For organic growers, the University of California Statewide IPM Program recommends treatments with lime and sulfur, sulfur alone, or with fixed copper products when temperature and precipitation are favorable to scab infection (Gubler, 2009). Woodleaf's organic apple-growing neighbors spray sulfur and lime sulfur regularly throughout the growing season.

Woodleaf relies on the mineral mix alone. The micronized sulfur in Woodleaf's mineral mix may help manage apple scab and powdery mildew (Podosphaera leucotricha), which is seen rarely on new growth in the spring. The low level of apple scab at Woodleaf likely is partly due to the dry climate, as well as to system design and management.

For organic growers, the University of California Statewide IPM Program recommends spraying copper at bloom when mean temperatures reach 62°F in March, 60°F in April, or 58°F in May. This model recommends treating every three to five days until the end of bloom (Gubler, 2009). There is some evidence that Blossom Protect™ bloom sprays are effective in managing fireblight (Kunz, 2012)