Transitioning to organic systems presents weed control challenges. In the absence of herbicides, weeds must be controlled with cultural and mechanical practices. Tillage and in-season cultivation are alternates to herbicides for grain production and annual forages, but are not possible in perennial forages after seedbed preparation. Weed control within an organic forage system is largely determined by species selection.

Forages that readily establish and effectively compete against weeds are essential to maintain weed control after establishment is complete. Tillage, clipping, and grazing are the main weed control methods available. The identity of weeds is important, especially when noxious weeds are present and can take over at the expense of useful forage species. This article describes some of the goals and challenges of organic forage production, and presents results of an experiment to determine the best forage species for transitioning to organic production in the southeastern United States.

In the southeastern United States, forage species selection could include most forage groups. Cool- and warm-season species, annual and perennial species, grasses, legumes, and forbs can be used to build a farm's forage program. There are even opportunities to include native warm-season grass species in productive stands (McIntosh et al., 2015). Conversely, environmental factors make species selection particularly important in the Southeast. Summer drought can damage cool-season grass stands, and hard freezes can harm sensitive warm-season grasses. Soil fertility can determine the production outcome of mixed stands, which often leads producers to include legumes in stands (Corbin et al., 2018). Legumes offer a cost-effective source of nitrogen.

In the southeastern United States, beef cow-calf and stocker operations rely on tall fescue and bermudagrass pastures to meet animal needs (Ball et al., 2015), whereas dairy producers mostly produce annual forages, such as corn silage and small grains, to meet the higher nutritional needs of lactating cattle. Reintroducing alfalfa back into the Southeast has been a goal for 21st century forage programs to improve forage quality (White and Lemus, 2015; Hoveland, 1986). Perennial forages are used for their persistence, tolerance of compaction, and ease of management. Annual forages require more effort from producers, but can have higher nutritive value than perennial forages.

To determine the best species for transitioning to organic production, five treatments for forage mass, the ability compete with weeds, and nutritive value were investigated. These included tall fescue (Schedonorus arundinaceus), tall fescue-alfalfa (Medicago sativa) mixture, bermudagrass (Cynodon dactylon), bermudagrass-alfalfa mixture, and an annual rotation. The annual rotation consisted of a winter wheat (Triticum aestivum) and winter pea (Pisum sativum) mixture followed by a sorghum-sudangrass (Sorghum bicolor x Sorghum sudanese) and cowpea mixture (Vigna unguiculata). The study was conducted at the Middle Tennessee AgResearch and Education Center (MTREC) in Spring Hill, Tennessee. The experimental site was historically a peach orchard, and was fallowed the year prior to plot establishment.

In each plot, two 1-ft2 square frames were harvested to two inches and separated for the botanical composition before flail mowing individual plots. In 2019, these separations were conducted to crop and weed categories. In 2020, the separations were carried out to crop and weed functional groups: grass weeds, leguminous weeds, and broadleaf weeds.

Weed surveys were conducted in July 2018, 2019, and 2020 to identify weeds present during the growing season. Weeds were identified to species where possible, using a standard identification guide (Bryson and DeFelice, 2009). Weed presence was determined by identifying which weeds occurred in a majority of the plots for each treatment, and compared between treatments where possible. Species richness, or the number of species present, and richness by functional grouping (grass, legume, or broadleaf weed) was also compared. Categorical weed analysis was conducted based on the species counts within treatments and years by means of Fisher’s exact test. The number of observations was too small for the Chi-square test, and thus required the computationally-intensive Fisher’s exact test. Species richness of the weeds and broadleaf species richness was divided into 3 categories: Low (0-3 species), Medium (4-6 species), and High (>6 species). Grass species richness was divided into Low (<3) and High (>3) categories. Legume species richness was divided into None (<1) and Present (>1) categories.

Forage mass was collected from a flail mower monthly from April to September in 2019 and 2020 to mimic rotational grazing. Stubble heights were three inches for all species treatments except for the sorghum-sudangrass and cowpea mixture, which was cut at six inches.

The grass monocultures received 75 lb N/acre as manure before going into spring growth. This manure was composted in the year prior to application as a source of N for the grasses. Tall fescue received manure in early March, and bermudagrass received manure in early April. Boron was applied to the alfalfa mixtures in March of 2019 and 2020. The annual rotation was tilled with a rotovator in June and October before planting the next crop. No manure or boron was applied to the annual rotation. The summer annuals were planted in June and the winter annuals were planted in October.

The grass and legume weeds were favorable forage species that occurred in the plots by chance. The grass and legume weeds present were favorable forage species overall. The 2020 presence of white clover in the plots likely improved the nutritive value of the stands as well as the summer performance of the tall fescue stands. The bermudagrass-alfalfa and tall fescue-alfalfa mixtures were associated with higher percent grass weeds (P = 0.04). This could be a consequence of the disturbance generated by planting alfalfa into these stands as well as the competition between establishing alfalfa and the established grass.

Grass weediness did not change over the transition period (P = 0.2). Grass and legume weeds were the primarily forage species, whereas the broadleaf forbs were of concern to livestock (Table 1). Weedy legume species richness differed among treatments (P = 0.01). The clover species present could have been more successful in the cool season sward due to their similar growth pattern with alfalfa, as well as the limited alfalfa stand present. Legume richness was associated with year, which is tied to a 50-day drought in 2019 coupled with favorable precipitation in 2020 (Table 2).

Table 1. Weeds present in a majority of five different species combinations during three consecutive years under a low-input organic forage system in Tennessee.

Means followed by the same superscript letter grouping within a column do not differ (P > 0.05).

When selecting a forage species for transitional or certified organic production, the following points should be considered.

1. What weeds are present in an organic forage sward? When are these weeds an issue?

Weeds can be divided into summer and winter species, annuals and perennials, and broadleaves and grasses (Bryson and DeFelice, 2009). Weed issues are often a result of management practices, such as low-fertility, overgrazing, or poor sanitation practices. The phenology of these weeds—when they grow and flower—can identify key periods where management is important. Cattle overgrazing in a sacrifice lot might allow a large portion of low-growing winter weeds, and depending on summer management, might lead to an abundance of buttercup (Ranunculus spp.) in the spring, and amaranth (Amaranthus spp.) in the summer (Table 1).

2. What types of weeds are usually found? Noxious weeds

Some weeds are hard to manage even with conventional herbicides. Amaranths are an increasing management challenge in the Southeast (Steckel, 2007), offering no benefits to the forage program. They compete for nutrients and space against the forage crops present. In an organic system, noxious weeds can primarily be controlled with clipping or tillage. In extremely weedy places, annual forages might offer the best original control, though amaranth competition with sorghum-sudangrass is a concern. In perennial forage crops, buttercups and thistles (Cirsium spp.) are a concern (Brainard et al., 2011; David Butler, personal communication).

3. Which ones will still meet animal needs? Forage weeds

Some species, even though are considered weeds in many instances, can still meet the animal’s nutritional needs despite not being the target forage. Crabgrass (Digitaria sanguinalis) is increasingly becoming a favored forage for heavy-use areas and disturbed areas because it can compete against less desirable species; additionally, crabgrass has comparable nutritive value as bermudagrass (Ball et al., 2015). Annual ryegrass (Lolium multiflorum) and white clover (Trifolium repens) are considered forage crops, but can gradually dominate swards (Ball et al., 2015; White et al., 1997).

4. How do the weeds and forages compete with one another during the season?

Weeds that grow very similarly to planted forages can be hard to manage. In bermudagrass stands, crabgrass can effectively compete with bermudagrass despite grazing and mowing management (Table 2). In the end, the weed cannot be removed from the stand without tillage. In contrast, competition between tall fescue and winter weeds keeps the latter from outcompeting the former (Table 2).

5. Will these weeds be better controlled with a grazing animal or mowing/haying equipment? Control attached to management: annual system is tilled biannually, all systems mowed throughout the growing season mechanically 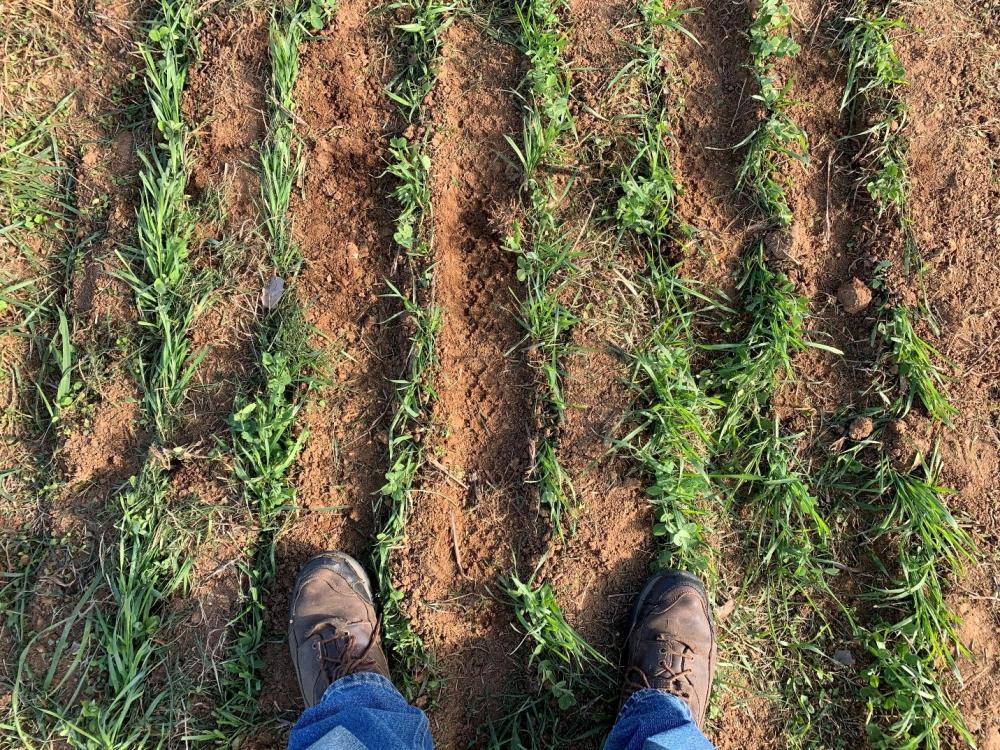 Annual forages can in some cases be less weedy than perennial forages because the preplant tillage between winter and summer crops removes weeds that would otherwise reproduce, or perennial/biennial weeds with resistant root structures (Figure 1). However, as an example, pigweed can become a big problem in annual systems, but usually doesn’t happen with well-managed perennial ones with a good stand of forage. The balance between potential soil erosion and weed control often leads producers to save annual forages for the best, level ground on the farm. Perennial, permanent ground cover, weedy or not, is important on hillsides. Haying and grazing are likely to reduce weed competition in a well-managed forage crop. However, grazing will selectively remove biomass of palatable forage and weed species, whereas haying will remove biomass of all plants above a given cutting height.

In the southeastern United States, weed control can be optimized in annual forages, but at the expense of additional field operations. The key outcome from this research was that weeds can exert significant influence on an organic forage system, and affect different forage selections differently. In organic forage production, species selection will strongly affect the eventual weediness of the sward. Choosing competitive forage crops based on the resulting weed community requires addressing areas of weed management from an ecological perspective. Regular scouting is still important in determining management regardless of species selection.

Acknowledgements: Thanks to Drs. Tom Mueller, Neil Rhodes, and David Butler for their thoughts on earlier versions of this article.