Powell amaranth, also known as green amaranth, is a fast-growing species that has become an important agricultural weed in cool temperate regions over the past 50 years (Uva et al, 1997). Native to dry, mountainous regions in the southwestern US and Mexico, this weed is now naturalized throughout temperate North America (Flora of North America; Mohler and DiTommaso, unpublished; Weaver & McWilliams, 1980), and its abundance relative to other pigweeds has increased in crop fields in Ontario, Canada (Weaver, 1984).

Powell amaranth is a tall, erect, branching summer annual, commonly reaching heights of 3–6 feet. Stems and foliage may be smooth, shiny, and lacking hairs (Fig. 1), or covered with fine hairs (Horak et al., 1994). On mature plants, leaves usually have petioles as long or longer than the leaf blade, and blades distinctly narrowing to a somewhat pointed tip.  Blades are 1.6–3.5 inches long by ~ 1 inch wide, and have entire (smooth) margins. 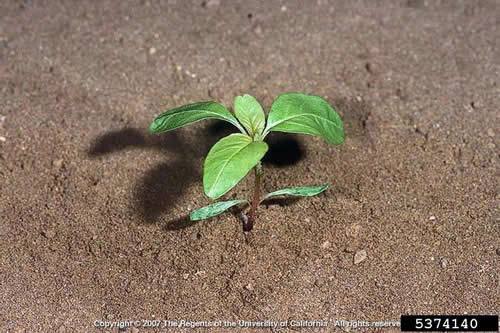 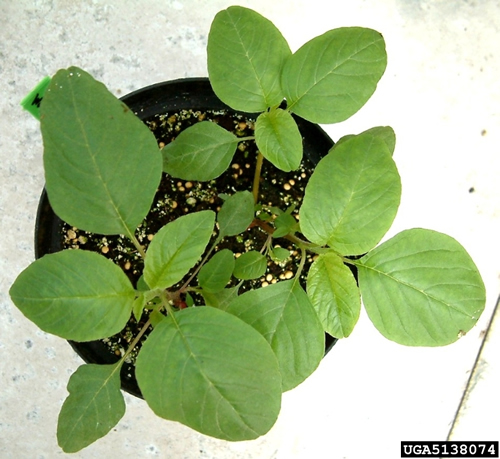 Male and female flowers are borne together on the same plant (monoecious). The small (<0.25 inch) flowers are clustered tightly in stiff, branched terminal spikes, with the individual branches 4–8 inches long and thicker than a pencil (Horak et al., 1994) (Fig. 2). Seeds are about 0.05 inch long. 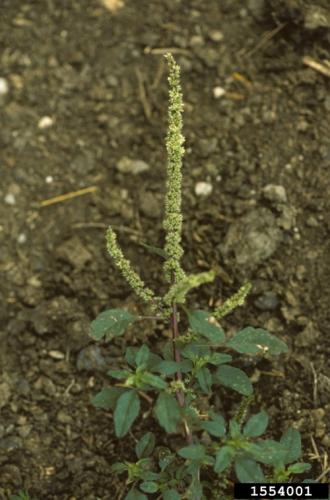 Powell amaranth is fairly variable, and is sometimes confused with redroot or smooth pigweeds. Identification may be further complicated by potential for hybridization with Palmer amaranth, redroot pigweed, and smooth pigweed (Old, 2008).

Powell amaranth grown with broccoli or broccoli + rye intercrop during a warm season responded to canopy shade with increased stem growth, whereas in a cooler season, the weed was more readily suppressed by crop competition (Brainard et al., 2005).

Powell amaranth responds to fertilization with increased growth and seed production (Mohler and DiTommaso, unpublished). A buckwheat green manure can suppress the emergence and growth of Powell amaranth, partly through removal of available soil N by the growing crop, and partly through allelopathic compounds released by decaying buckwheat residues (Kumar et al., 2008, 2009).

Results of the Ontario studies suggest that, in cool climates, Powell amaranth may grow faster and compete more aggressively against crops than other pigweed species. Nevertheless, the seedlings remain small and susceptible to cultivation for several weeks, and timely cultivations during late spring and early summer, followed by organic mulch, have been found effective for managing Powell amaranth in upstate New York (Mohler and DiTommaso, unpublished).

Mohler, C. A., and A. DiTommaso. Unpublished. Manage Weeds on Your Farm: a Guide to Ecological Strategies. Department of Crop and Soil Sciences, Cornell University. Pre-publication draft, version 5.1. Publication anticipated in 2012.