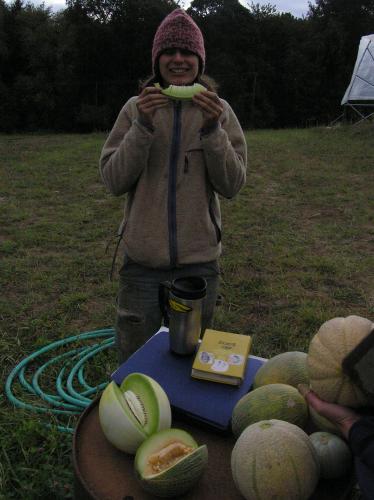 Here in the Northwest, cucurbits are a staple on the market farm. From cucumbers and summer squash (which are summer anchors), to melons (which can be marginal but draw in customers with their sweetness), to pumpkins and winter squash (which help to extend the market season through the fall and into the early winter), cucurbits play a significant role on many market farms in this region and around the country.

I farm just outside of Portland, Oregon at several sites with differing soils and micro-climates, and I’m always experimenting with varieties and production methods. I’ll try to describe my basic approach here from one of those sites and give a little insight into some of the variation. Links throughout the article will reference other eOrganic articles. I will be publishing articles describing the rest of the production and storage season next. 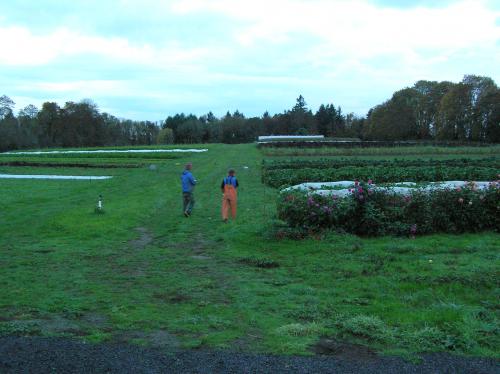 A view of the fields from the barn in early October. Photo credit: Josh Volk, Slow Hand Farm

The production system I’m describing is on a small market farm just outside of Portland, Oregon. The farm is on an 18 acre property, with 9 of those acres cultivated. The remainder is occupied by outbuildings, trees, hedgerow, permanent sod roadways and headlands. The soil is a very well drained sandy loam, with about 4% organic matter. The farm is located at the confluence of the Willamette and Columbia Rivers, and thus sees significant cold air drainage and frequent fog that lasts until late in the morning. Annual rainfall is about 40 °F with most of that coming between October and April. Nights are usually frost free after April and until October, but are typically in the 40s through May, and rarely stay much above 60 °F. Daytime temperatures can get over 100 °F, but a typical summer sees the majority of days in the low 80s or high 70s with only a handful of weeks higher than that. 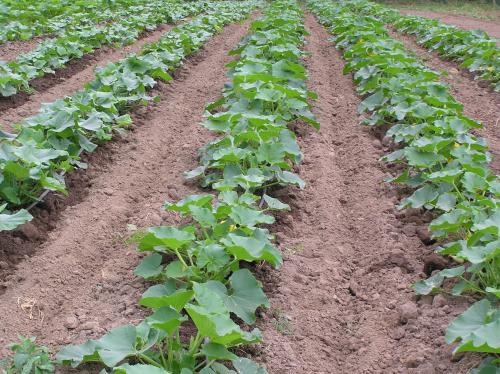 Planning for The Crop

I break my cucurbits into four categories: summer squash, cucumbers, melons, and winter squash and pumpkins. Summer squash and cucumbers are summer staples, but they are relatively productive so only a handful of beds are devoted to either one. Melons take a little more space to get a decent crop, but I’ve found that my production is improved when I concentrate on smaller plantings that are easier to manage. Melons occupy probably double the space that the summer squash and cucumbers occupy. Winter squash and pumpkins take quite a bit of space but they are easy to manage so we plant them on larger acreage.

In my rotations the cucurbits fit into several categories. On the farm we use both overhead and drip irrigation depending on crop preference; cucurbits fit into a drip section. Cucurbits deal with weed pressure well so they can follow other crops that might build up weed pressure. They do not require a super fine seed bed for planting into so they can follow a heavy cover crop easily. Cucurbits are in the field for an extended period so some weeds do tend to go to seed which means they are not good for preceding a crop that is sensitive to weed pressure. They are also heavy feeders, and it is difficult to get a good cover crop in after they come out of the field, so following crops may need extra fertility.

In my rotation system, cucurbits have been preceded by root crops or a cover crop fallow, and followed by sweet corn. Most roots are out of the fields early enough to allow a good fall-planted cover crop of rye and vetch, sometimes mixed with favas, to be established, and that cover crop will have time for good growth before the fields are prepared for the squash planting. If there is a fallow, it is usually summer sudangrass which is over-seeded with crimson clover in the fall. The sudangrass is mowed during the summer whenever it threatens to head out; that keeps it vegetative and producing more biomass. In the winter, when the sudangrass freezes out, the clover takes over and is then easily turned in in the spring.

Following cucurbits in the rotations, I usually want a crop with some weed tolerance that doesn’t go in too early so that I can get a cover crop to grow to maturity. Cucurbits are easy to cultivate when they are small, and they do a good job of suppressing weeds when they are larger, but a few weeds always do manage to survive in a field. Most of the surviving weeds will go to seed, especially in winter squash and melon fields, because the cucurbits are in the ground for a long time and they are difficult to weed when the plants are large. However, a small number of large weeds doesn't have a significant effect on the crop yield. Also, even though the cucurbits are summer crops, their harvest extends into the fall, which makes it difficult to get a good winter cover crop established. This is especially true for winter squash, which often doesn’t come out until mid October. Sweet corn and solanums are all crops that I use to follow cucurbits. All of these crops are relatively easy to cultivate and are somewhat weed tolerant, and all of them are planted late in the spring after a winter cover crop has had time to put on significant growth.

To learn about how other farmers are managing weeds in cucurbits, watch these Weed 'Em and Reap videos:

When estimating the quantity of plants needed to produce a particular yield I usually rely on yield records from previous years. In the absence of yield data of my own I either refer to reliable seed catalogs, or make my best guess. Some seed catalogs will give yield estimates, for example the  number of winter squash per plant. In my experience, on my soil and in my conditions, catalog yields tend to be on the high side. For zucchini, a decent guess might be an average of one squash (whatever size you plan to harvest) per week. You can get weight yield guesses by multiplying the number of squash harvested by the estimated weight per squash. If you keep these numbers each year, your yield estimates can become fairly accurate in a few years.

When planning for yields, I also consider how much time we have to care for a crop, how much space we have to devote to the crop, and how much storage space we have for storage crops like winter squash. All of these factors are weighed against other crops we are growing, the market we think we have for the crop, and the relative profitability of the crop. If we are deciding to increase our production I can make plans early for any extra labor needed, adjusting the space devoted to other crops we grow, and building more storage capacity if needed. 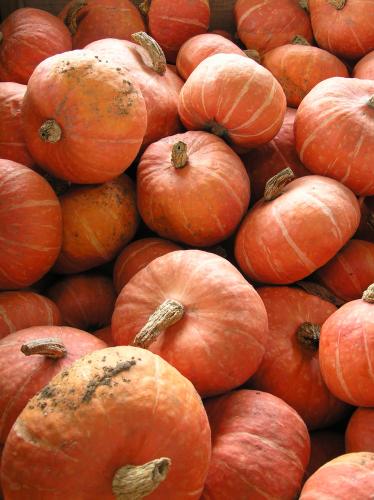 I am constantly experimenting with new varieties and I have a hard time resisting trialing varieties with great descriptions but that are marginal in my conditions. Ultimately, I have to look to both my customers and my farm conditions to limit my selections. With my customer preference I'm partially guessing what will be received well, and partially using previous comments, either solicited or unsolicited, and I'm also considering myself as a customer, thinking about what I really want to eat and therefore grow.

Learning to read between the lines in seed catalogs is an important part of variety selection, and every catalog has its own language to decipher. For my cool, short season climate I have to focus my attention on short season varieties and look for varieties that mention cool season tolerance. That limits my pool, and then within that pool of candidates I can start looking for specific mention of flavors, shapes, colors, and textures that I think the customers would like. With winter squash I've found that PMR (powdery mildew resistant) varieties tend to work better for me so PMR varieties particularly catch my eye, but only if they also mention something about flavor. I've found that most catalogs comment on the features of a vegetable that are good and leave out any mention of the poorer qualities. For example, if flavor isn't mentioned, the variety likely doesn't have any. Frequently they will also exaggerate (which comes as no surprise) so looking for superlative descriptions of important features is important. I've frequently found that flavor descriptions that are not superlative mean that while a variety may have some flavor, it's not really that great.

Seed catalogs and suppliers that are focused on larger scale agriculture and growers likely to be wholesaling or shipping long distances tend to focus their descriptions on field and packing characteristics and leave out flavor altogether, regardless of a variety's strength in that category. On the other end of the scale, I've found some smaller seed houses are completely focused on the flavor and give little to no information on field characteristics. For direct marketing, some varieties have great names, or great back stories, that will help sell them at market. regardless of other characteristics. Be cautious of picking varieties by name, as the quality of the name doesn't always match the quality of the variety. In fact, some seeds are sold under different names in different markets, and some names are so general that they are used for multiple strains of a variety with very different characteristics.

One advantage to trialing multiple varieties is that it gives some basis for comparison within and between catalogs. For example, days to harvest are usually just relative and don't match how many days it will actually take in my conditions. However, I can compare a known variety with another listed variety and understand that it will be half a week to a week earlier if it says it's three or four days earlier. By comparing descriptions I can also get a sense of other qualities like flavor, storage, and yield. 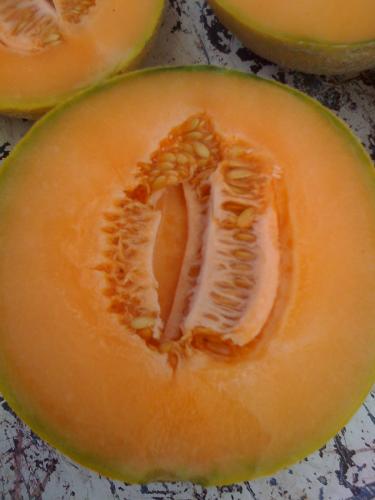