Mulches contribute to weed management in organic crops by reducing weed seed germination, blocking weed growth, and favoring the crop by conserving soil moisture and sometimes by moderating soil temperature. Opaque synthetic mulches like black plastic provide an effective barrier to most weeds and are amenable to mechanized application, but they must be removed at the end of the season. Organic mulches like straw suppress annual weed seedlings, conserve moisture, and add organic matter as they break down, but they are more labor-intensive to apply. This article examines uses, advantages, and limitations of different mulching systems for weed control in organic vegetable production. Two companion articles provide additional information on organic mulches and synthetic mulches.

Mulching can reduce weed competition against vegetable crops, and save fuel and labor costs for weed control. Covering the soil surface with a suitable mulch can:

Synthetic mulches like black polyethylene film (the most widely used plastic mulch) or landscape fabric are laid on a prepared seedbed just before transplanting or seeding a vegetable crop through holes or slits cut into the mulch. In-row drip irrigation lines under the mulch provide water and liquid fertilizers to the crop. Mechanization, with equipment such as tractor-drawn bed shapers, mulch layers, and planters, allows the farmer to mulch and plant a multi-acre field within a single day (Fig. 1). Black plastic, other opaque materials, and infrared-transmitting (IRT) mulch effectively block weed emergence, and promote soil warming and early crop growth. Weeds emerging through planting holes may require manual removal, and alleys between mulched beds generally need cultivation or other weed control measures. 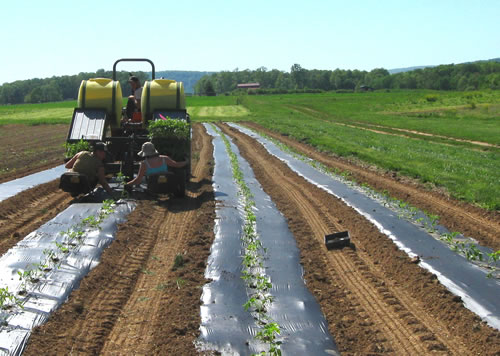 Organic mulches such as hay (Fig. 2a), straw (Fig. 2b), leaves, and chipped brush, are usually applied when the vegetable crop is well established and the soil has warmed to near-optimum temperatures. They are most effective on weeds emerging from seed, and least effective on aggressive perennial weeds emerging from rootstocks, rhizomes, or tubers. Organic mulch applied immediately after a final cultivation often suppresses later-emerging weeds until the crop has passed through its minimum weed-free period. Organic mulches generally lower soil temperatures and conserve soil moisture by slowing evaporation while allowing rainfall to penetrate. Normally, organic mulch is left in the field after harvest and, as it breaks down, it helps build soil organic matter. 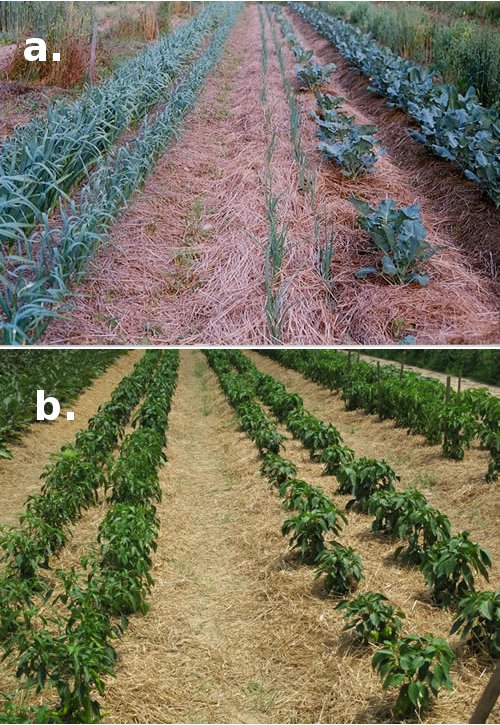 Figure 2. Organic mulches. (a) About 3 inches of hay mulch have suppressed emergence from a large weed seed bank of galinsoga (Galinsoga spp.) and other annual broadleaf weeds in broccoli, onion, and garlic in the Appalachian region of Virginia. (b) Pepper thrives in a straw mulch in the Tidewater region of Virginia. At both sites, a few grasses and perennial weeds are beginning to break through, but the vegetables have benefited from soil moisture conservation as well as weed suppression by the mulch. Figure credit: Mark Schonbeck, Virginia Association for Biological Farming.

Many vegetable farmers apply straw or other organic mulches in alleys between plastic-mulched beds, either at planting or after cultivation (Fig. 3). In addition to suppressing alley weeds, this system adds organic matter, helps conserve soil moisture and soil quality, and prevents excessive soil heating during summer, thereby realizing many of the benefits of both organic and synthetic mulches. The organic mulch can also improve fruit quality in pumpkin and other vine crops by preventing fruit-soil contact in alleys. 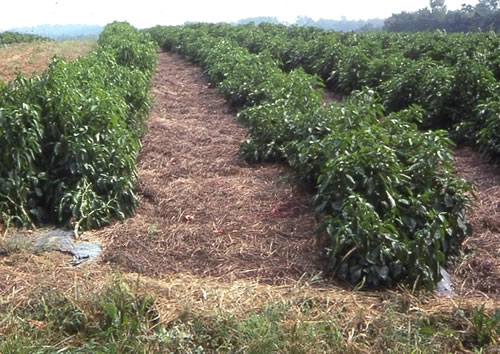 Seeds of an even wider range of common weeds respond to wide daily soil temperature fluctuations, including some that do not respond to light, such as horsenettle (Solanum carolinense), common cocklebur (Xanthium strumarium), and foxtails (Setaria spp.). Many summer annuals, including pigweeds, galinsoga, and purslane, germinate in response to high soil temperatures (85–100°F). Organic mulches and white or reflective plastic films lower soil temperature and dampen daily fluctuations, thereby deterring weed seed germination.

Even with light and temperature stimuli blocked, a percentage of the weed seed population will germinate. However, the mulch intercepts light essential for photosynthesis and physically hinders seedling emergence. Dicot (broadleaf) seedlings are fairly delicate and easily suppressed by this mulch effect. Hay, straw, or cover crop residues at 3–5 tons per acre (2–4 inches, loosely packed) can prevent emergence of small-seeded broadleaf weed seedlings for at least several weeks, whereas a heavier mulch (7–10 tons per acre) may be required to block larger seeded species like common cocklebur or velvetleaf (Abutilon theophrasti), and some grasses, whose shoots are protected by a pointed sheath (coleoptile). Perennial weed shoots emerging from rootstocks, tubers, rhizomes, or bulbs can penetrate most organic mulches, and a few weeds, such as nutsedges, can puncture plastic film.

In addition to reducing weed seed germination and emergence, mulch can improve the growth and competitiveness of established crops by conserving soil moisture and modifying soil temperatures (Schonbeck and Evanylo, 1998; Swaider et al., 1992) (Fig. 4). Soil warming under black or IRT plastic can enhance early season growth and maturation in heat-loving crops, while the soil cooling effect of organic and reflective film mulches benefits cool-weather vegetables like potato, and can help most crops thrive during hot summer weather.

Some organic mulches, such as hay, provide slow-release nutrients, or reduce certain pests by harboring their natural enemies. Reflective or colored synthetic mulches have been found to enhance the yields of certain crops by repelling pests or modifying the light environment around the crop (Orzolek and Lamont, 2000).

It is important to note that, once a weed manages to emerge through the mulch, or emerges through a planting hole in plastic film, it enjoys the same soil moisture conservation and other mulch benefits as does the established crop. Conversely, any crop seedlings emerging beneath a mulch will be suppressed. Thus, it is common practice to spread straw or other organic mulches only after the crop is well established, and immediately after cultivation or manual removal of existing weeds. 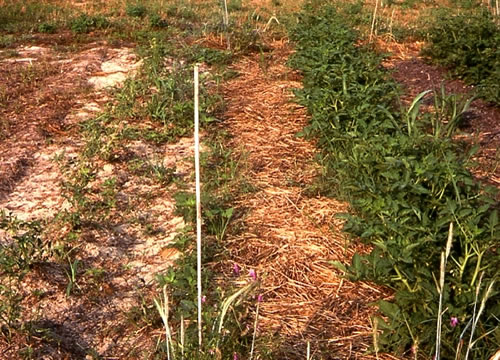 In some circumstances, mulching can aggravate weed problems. Organic mulches, especially hay from off-farm sources, may carry seeds of new weed species into the field (Fig. 5). An organic mulch that is too thin to suppress weeds (e.g., 1–2 tons per acre, or an inch or so of material) may allow weed emergence, then enhance weed growth by conserving soil moisture (Mohler and Teasdale, 1993). Legume residues have also been reported to release enough nitrate-N to trigger germination of nitrate-responsive weeds such as redroot pigweed (Amaranthus retroflexus) (Teasdale and Mohler, 2000). Aggressive perennial weeds can emerge through a heavy (6 inch) organic mulch, thrive, and steal moisture and nutrients intended for the crop. Weeds growing through mulch are more difficult to control mechanically, and may require special high-residue cultivators. 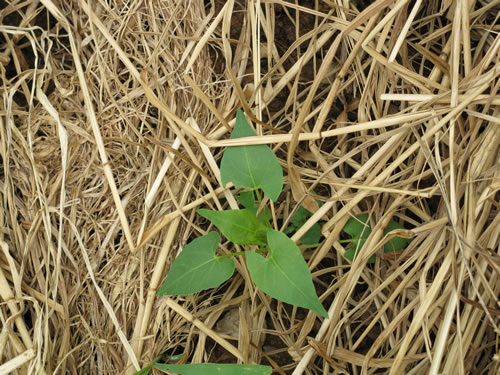 Untimely mulching, or using the wrong mulch for a particular crop, can slow its growth and leave it more vulnerable to weed competition. For example, fresh (“bright”) grain straw can lower soil temperatures by as much as 10°F. Spreading straw or other soil-cooling mulches around newly-transplanted tomato or melon can set the crop back several weeks and give the weeds a head start.

Mulch materials with a high ratio of carbon to nitrogen (C:N ratio) have the potential to slow crop growth by immobilizing soil N. This is most likely to occur with finely divided materials (e.g., sawdust) or materials rich in soluble carbohydrates that can leach into the soil (e.g., sorghum–sudan greenchop). Coarse, dry materials like grain straw or chipped brush rarely tie up soil N unless they are incorporated into the soil.

Applying organic mulch around small, succulent lettuce, brassica, or other vegetable seedlings can result in defoliation by slugs or insects, leading to poor stands or delayed establishment. However, these organisms have been observed to attack weed seedlings as well, and can reduce weed populations without seriously impacting well-established crops (Mohler, 1996; Mohler and Teasdale, 1993). In addition, many organic mulch materials, especially freshly cut immature cereal grains, hay, or forage crops, may release substances that inhibit germination and seedling growth in both weeds and crops (allelopathy). Mulches applied when crops are well established will minimize these risks to crop production, and can provide mid- and late-season weed suppression.

Generally, organic mulches enhance moisture infiltration and reduce runoff. However, in situations where moisture is limiting, applying a thick, organic mulch on dry soil can prevent light rainfalls from reaching the soil and crop roots. In this situation, farmers can irrigate the soil thoroughly (to near field capacity), or install in-row drip irrigation lines prior to mulching.

Non-porous plastic mulches can hinder infiltration of rainfall or overhead irrigation into the crop root zone. Some water runs into planting holes, but much of it runs off the mulch into alleys and may not reach crop roots. Thus, almost all growers who use plastic install drip irrigation under the mulch to deliver water to the crop.

Other disadvantages of synthetic mulches include the labor of end-of-season removal, the petroleum embodied in the mulch, generation of non-biodegradable waste, and the fact that synthetic mulches do not add organic matter or nutrients to the soil. Compost or other solid organic fertilizers and amendments must be applied to crop rows prior to laying the mulch, and sidedressing the crop is limited to liquid fertilizers via the drip line and foliar feeding.

Mulching cannot alone provide sufficient weed control, and works most effectively in conjunction with other practices. For example, market gardeners often spread hay or straw after cultivating one or more times during crop establishment (Fig. 6). Because organic mulches rarely block 100% of weed emergence, they give best results when used in conjunction with good crop rotation and measures to prevent or limit weed propagation. Similarly, measures to reduce populations of nutsedge, morning glory, and other aggressive weeds may be needed before synthetic mulches can be used successfully. 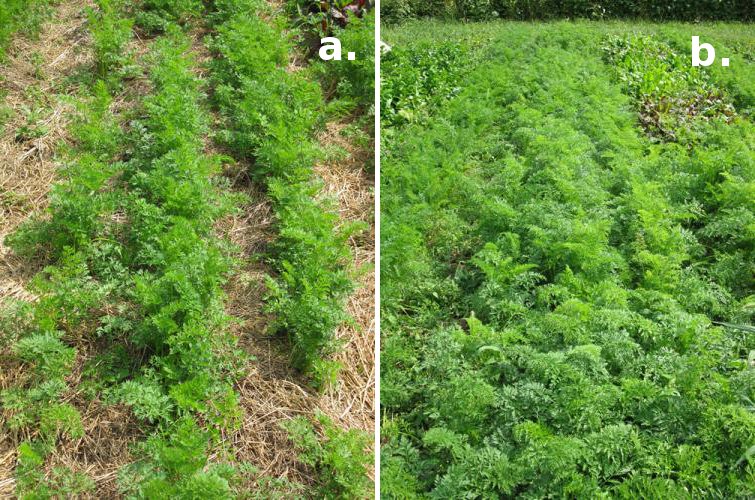 Figure 6. Weeds were successfully managed in carrot in this Floyd, VA garden through a combination of cultivation and mulching. Sown at the end of June, 2009, hoed twice during establishment, then mulched in early August (a), the crop remained mostly weed-free and closed canopy by early September (b). Figure credit: Mark Schonbeck, Virginia Association for Biological Farming.