Organic Plant Breeding on Display at Farm to Flavor 2022

It’s not often that there are opportunities to learn about plant breeding other than by being in the field. But the annual Farm to Flavor event in Madison, Wisconsin offers a sensory experience— the chance to see, touch, talk about and taste the food crops being conserved and developed by university and independent plant breeders and farmers. The 2022 Farm to Flavor took place at the Garver Feed Mill, and was organized by the Seed to Kitchen Collaborative, the Culinary Breeding Network and the Artisan Grain Collaborative. All around the hall were tables covered with colorful vegetables and grains, along with informative displays and a variety of culinary creations from local chefs, all of which stimulated excitement, conversations, and questions—what are all these different crops, how do you use them, and what are the breeders trying to accomplish?

Scanning the room, I was immediately attracted to the bright orange, yellow and red fruits on the tomato table. Here, Michael Lordon of Organic Seed Alliance gave me a tour of some of the tomatoes in a collaborative regional breeding project led by Julie Dawson of University of Wisconsin-Madison and funded by NIFA OREI. Many gardeners are familiar with the sweet, tangy orange ‘Sungold’ cherry tomato, but Keith Mueller of KC Tomato a partner on the project, is breeding a tomato with a similar flavor but larger fruits. Another independent breeder in the project, Erica Kempter, of Nature and Nurture Seeds, is crossing, elongated ‘Juliet’ hybrid tomatoes with bicolor ‘Blush’ tomatoes—the result was a variety of fruits with many different colors and shapes, including some elongated red ones with green stripes! On the other side of the tomato table, Mark McCaslin of Frogsleap Farm explained how he is working with researchers at Cornell and the University of Wisconsin to breed tomatoes that are not only resistant to septoria leaf spot, but mature early and taste good! On the table were red cherry and cocktail type tomatoes, both with good resistance to septoria leaf spot. A network of farmers and gardeners in the Upper Midwest are testing these varieties and sharing feedback using the SeedLinked website. As I learned about all these experiments, visitors were happily enjoying all the different tomatoes with basil, mozzarella cheese and balsamic vinegar. 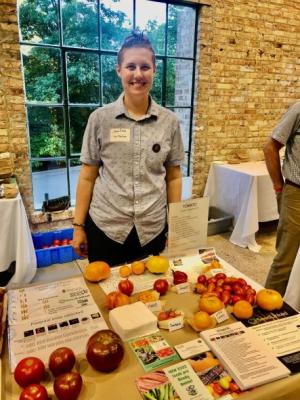 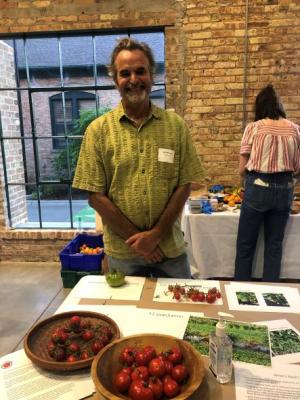 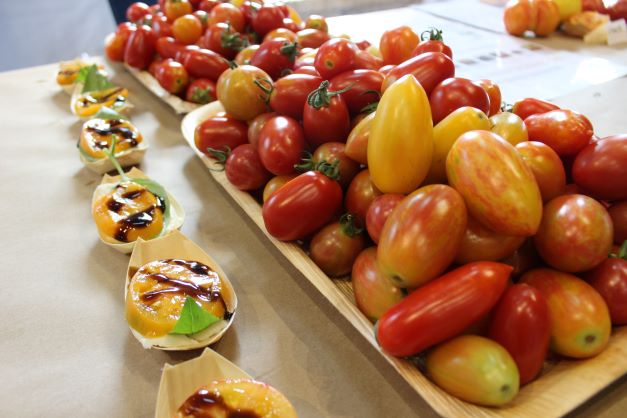 Nearby, another particularly colorful table displayed an array of red, purple, orange and yellow carrots, with each color corresponding to a different nutrient that the carrots supply. As part of a NIFA OREI funded project, Philipp Simon and his collaborators are breeding these colored carrots to be healthy, crisp, tasty and resistant to pests and diseases. I asked Phil why many yellow and purple carrots I’ve bought seem tougher than orange carrots, and he replied that in many parts of the world, carrots are eaten cooked rather than raw—so were not bred to be crunchy. Next to him, Madison chef Jonny Hunter served up dark purple carrot sticks marinated in carrot and hazelnut dukkah—a mix of nuts, herbs and spices. 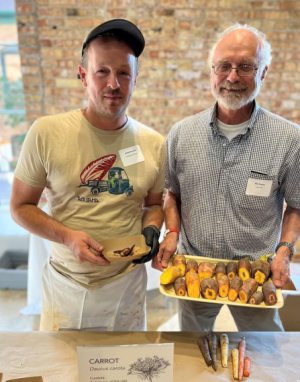 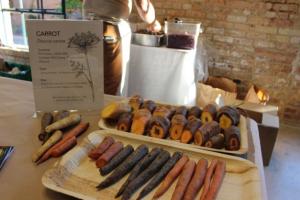 From Oregon State University, Casey Wilson brought Cucurbita moschata Tromboncino squash. Tromboncino, also known as ‘Zucchetta rampicane’, is related to Butternut squash, and has a very long, seedless neck. Like zucchini, it is often eaten when it is young as opposed to when it is fully mature. Usually, Tromboncinos are light green, but Casey’s ranged from yellow to light green, dark green and bicolor—including some with bicolor flesh on the inside. While most Tromboncino squash grow on huge vines, some of these lines have a semi-bush habit. Another display illustrated the B-genes of different squash species, which cause yellow coloring, a topic he is studying as part of his Master’s thesis. Visitors to his table enjoyed hot, squash blossoms stuffed with cheese and herbs, prepared by Sean Fogarty of the Food Fight Restaurant Group. 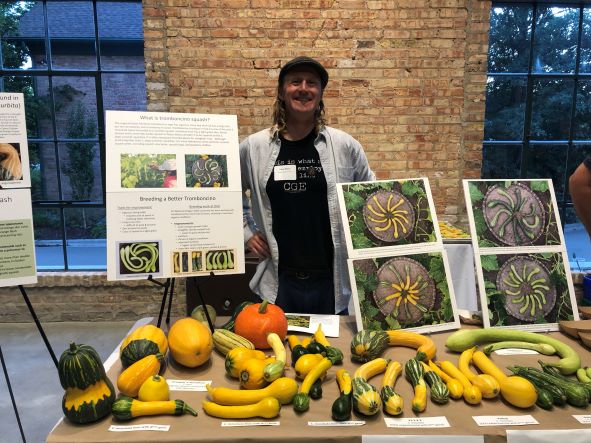 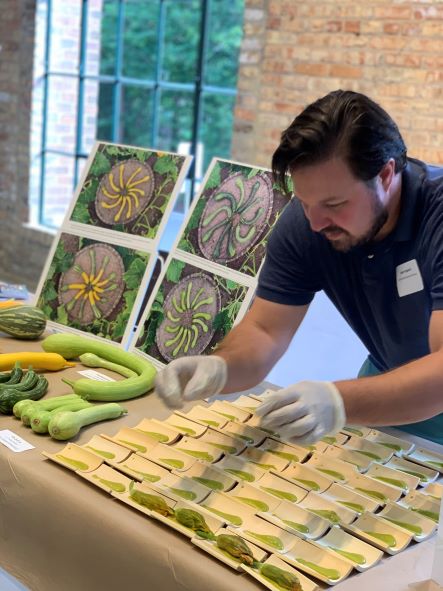 This year’s Farm to Flavor had a special emphasis on grains: wheat, rye, barley, oats and Kernza®. Researchers from six different states each had tables showcasing their breeding work to develop beneficial traits for producers, bakers, maltster and brewers. Some of them are collaborators on the NIFA OREI funded project Value Added Grains for Local and Regional Food System, led by Mark Sorrells of Cornell. At the University of Wisconsin-Madison, Pablo Sandro, Lucia Gutierrez and Julie Dawson showed advanced breeding lines from crosses of historic winter wheat varieties known for artisanal breadmaking quality and modern varieties that performed well in the Northeast and Midwest for disease and pre-harvest sprouting resistance. Jessica Rutkoski of the University of Illinois breeds soft red winter wheat (used in pastries, cookies and crackers), that perform well in organic conditions, yield well and have excellent grain quality. Melanie Caffe of South Dakota State University breeds disease-resistant hulled and naked oats for organic producers and processors, and is evaluating oat varieties for resistance to rancidity in storage. Another NIFA OREI project, Developing Multi-use Naked Barley for Organic Systems, is led by Brigid Meints and Pat Hayes of Oregon State University. They are characterizing the traits of a diverse range of naked barley varieties from all over the world, to learn which ones are most appropriate for baking, brewing, malting and animal feed. Heather Darby of the University of Vermont is partnering with Glynwood Grains & Staples to research best practices for growing cereal rye, evaluate varieties, and learn how different practices influence grain quality. At the University of Minnesota, Constance Carlson is working with the Land Institute to improve Kernza®, a relatively new perennial grain first developed at the Rodale Institute from a wild plant, intermediate wheatgrass. Constance showed how much larger and heavier the grains are now compared to the wild species. 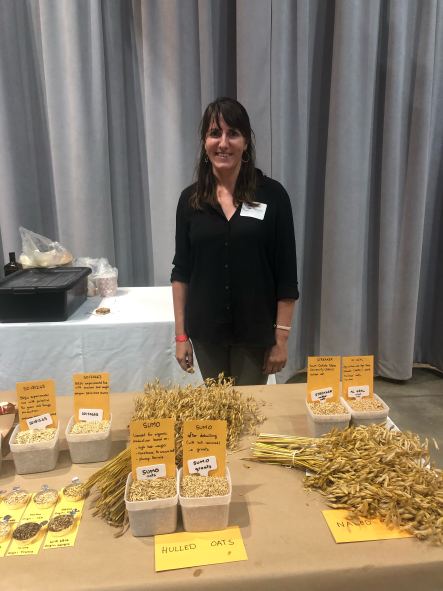 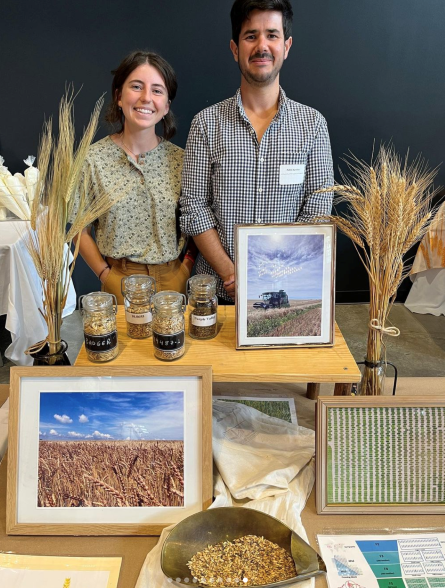 The chefs who were paired with these grain breeders had no shortage of ideas in terms of how to eat all these whole grains. Abra Berens of Granor Farm and author of the grains cookbook ‘Grist’ prepared a cherry tomato salad with sprouted oats and oat milk sesame dressing. Nathan Duplayee of Exact Sciences made soft red wheat cherry streusel bars, which were just the right amount of sweetness to make them enjoyable without being guilt-inducing. Of course, there were also some delicious breads, such as two whole wheat sourdough breads baked by Kirk Smock of ORIGIN Breads with different varieties of hard wheat, including a yellow-colored one called ‘Amarillo’ bred by UC Davis. And I really wanted to take home a bag of the cracked hard wheat brioche buns with whipped salted honey butter, baked by Andrew Hutchinson of Madison Sourdough. While Andrew advocates eating healthy whole grain bread on a daily basis, he says there is a place for special treats such as these light buns, which would be wonderful for breakfast, but also with burgers of any kind! 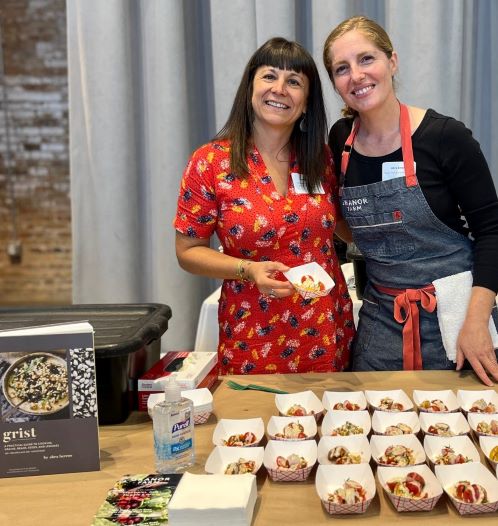 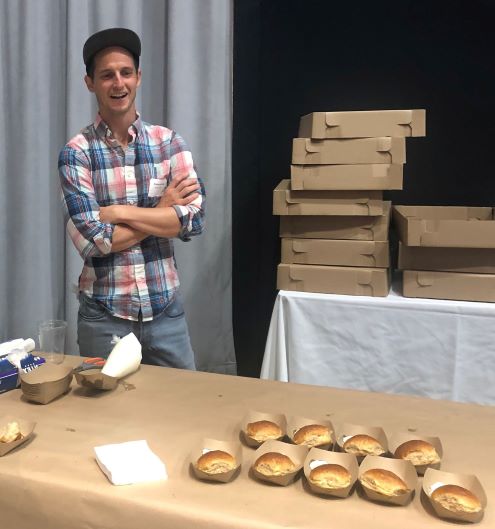 Some of the most crowded tables were those showcasing some of the great diversity in Native American corn—kernels in every color of the rainbow and a variety of types that were developed over millennia for different uses. Dan Cornelius of Yowela?talih^ Farm brought braids of Indigenous maize, including Bear Island Flint corn. Andy Hazzard displayed crosses between colorful Glass Gem and a white flour corn with a broad spectrum of colors and large kernels. There were several corns selected by Bill Tracy at the University of Wisconsin Madison: a dark red flint (flour) corn and a large sweet corn with plump, creamy white and purple kernels called ‘Wow’! Chef Jonathan Correa of La Cosecha Tortilla Company combined these corns in a way that really highlighted their diversity and how different species perfectly suit their different culinary uses: a Red Flint Corn Tostada with Toasted Sweet Corn Chicatanos Aioli, Epazote and Chile Morita. 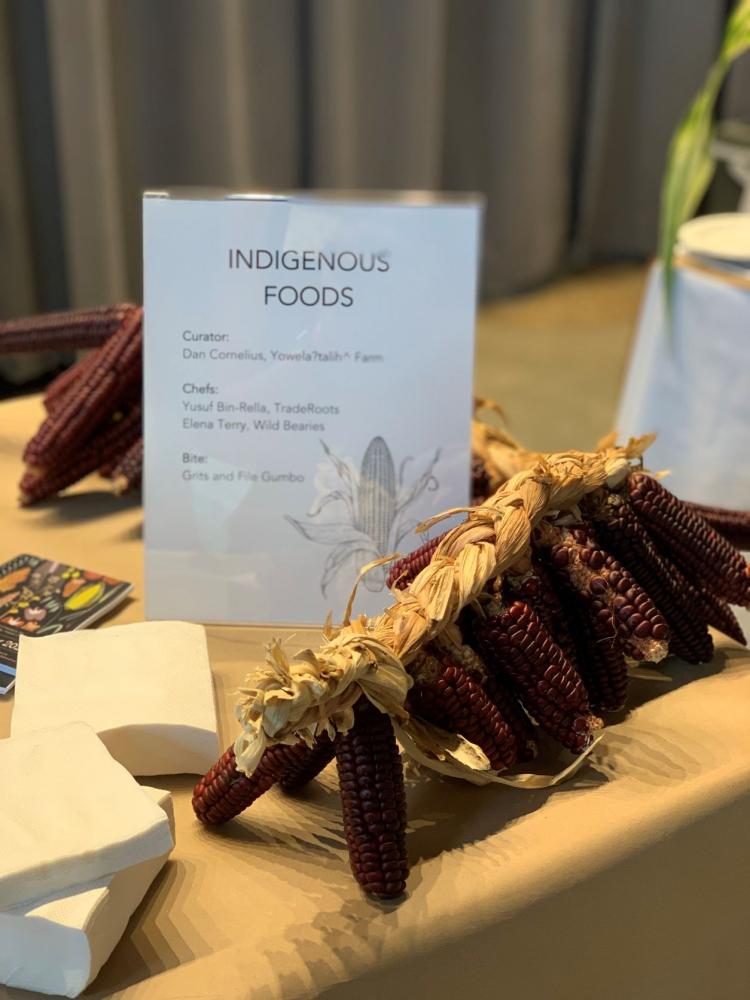 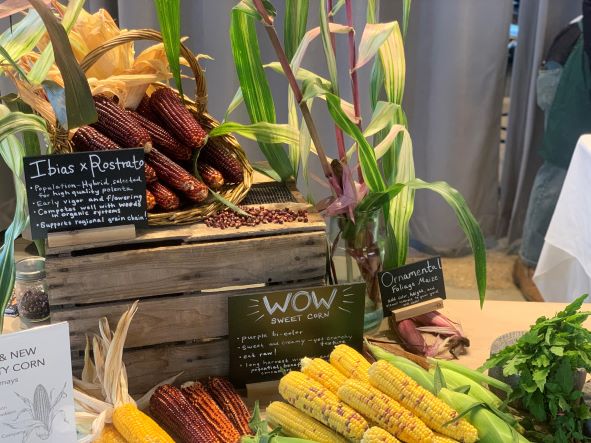 In case anyone was still hungry, they could head over to the potato table led by Rue Genger and Jeff Endelman of the University of Wisconsin Madison. Rue explained that many organic potato growers need potatoes that are adapted to a short growing season and clay soils, since many of them farm on heavier soils than conventional potato growers do. The dark purple skinned, yellow fleshed potatoes at the table were simply boiled, but they were hearty and satisfying with a fluffy texture. Based on the positive feedback they received, Rue and Jeff are preparing to produce foundation seed and eventually release these varieties. 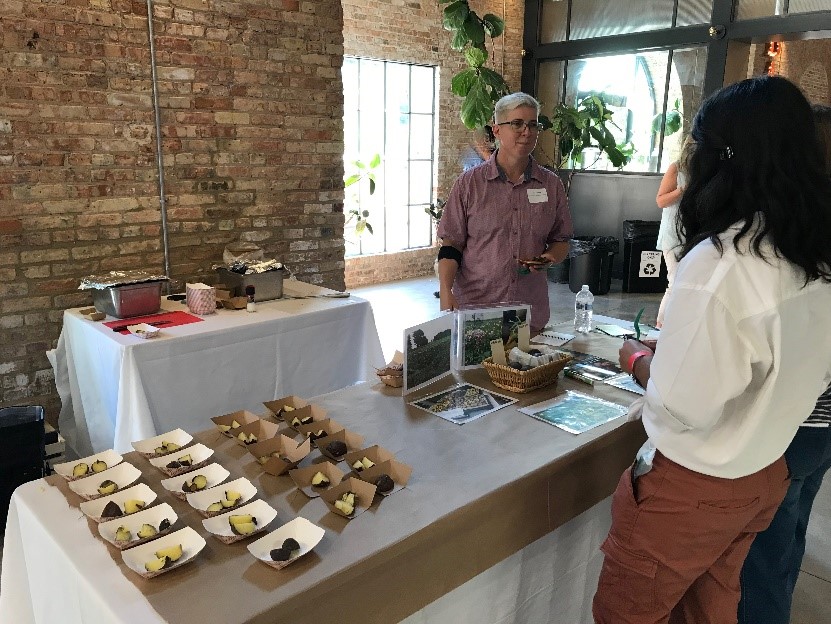 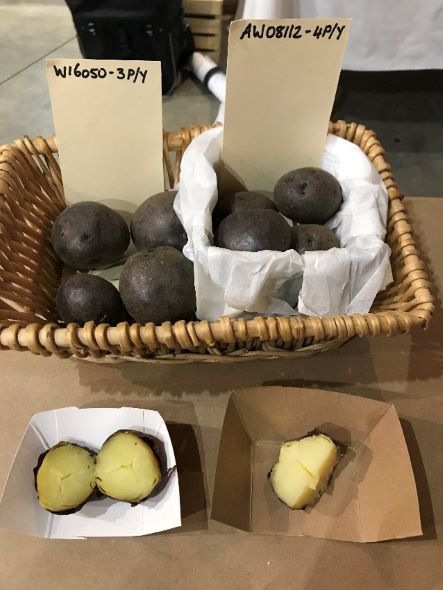 With so many different crops and foods, it was impossible not to be curious about all the research, and to appreciate the importance, the history and also the joy of plant breeding! To learn more about this event and the plant breeding projects and nonprofits mentioned in this article, visit the following links: