In natural systems, insects are often their own worst enemies, in a way. Many insects feed on each other at some or all the stages of their life cycles. Familiar predatory insects include ladybugs, assassin bugs, and others, including praying mantids. Praying mantids are also often referred to as ‘praying mantises’ or simply ‘mantises’, but these names are technically incorrect. ‘Mantid’ or ‘praying mantid’ is the correct term to use for these insects.

Praying mantids are a common sight in most parts of the country, often mainly in late summer and early fall when the adults mature and begin to move about in search of abundant food and mates. Praying mantids also make a suitable, if generalized, pest insect control organism for some agricultural systems. Although mantids reduce the density of many types of pest insects, such as grasshoppers, flies, and caterpillars, they are not specific to one type of prey insect and therefore will not provide complete control of a given pest. Mantids are also highly cannibalistic; this means they will eat each other, especially when they are younger nymphs or when adult females consume the male after they mate (although the latter type of cannibalism is perhaps not as common as reputation suggests).

Mantids can also be released into non-cropped areas that support dense weedy plant growth, and can help to lower the populations of some types of insects in these areas, limiting their spread into the crop itself. Mantids are also likely to suppress insect density (meaning less bugs!) when applied to fallow fields in which natural vegetation is allowed to reappear for a season. Mantids prefer dense vegetation, so multiple crops in close association are best suited for their release. 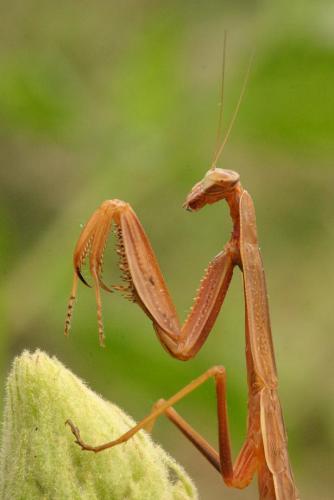 Several species of mantid are available as oothecae (the over-wintering egg pod) commercially through greenhouses and other garden suppliers; the overwhelming majority, however, will supply you with eggs of Tenodera sinensis, the Chinese mantid. Other less commonly encountered species include the European mantid, Mantis religiosa, and the Carolina mantid, Stagmomantis carolina. All three will provide a similar generalist control, although owing to its larger size (and appetite) Tenodera may be best suited for most situations in the middle latitudes of North America.

Mantids emerge from their oothecae in spring as the temperatures warm and remain well above freezing for some time. Mantis religiosa oothecae will not hatch until they have been exposed to cold temperatures; Tenodera oothecae will hatch after about six weeks (total) of warm weather following their deposition by a female mantid. This means that if the fall is warm, Tenodera are able to hatch earlier in spring, because they have already undergone some of their development. This latter species is especially useful because you can control the timing of egg hatch to coincide with pests. By purchasing several oothecae and hatching/releasing them in sequence, keeping them in cold storage in the meantime, you can have mantids of multiple sizes present in the environment at once. This may more effectively control pests, because if only one cohort (a same-sized population group) of mantids is present, they will eat whatever available insects which are most appropriate for their size, but will ignore other insects.

A young mantid will eat small flies and other insects, but as it grows it will progressively consume larger insects until the adult phase, where larger locusts, spiders, butterflies, moths, etc. will be taken as prey. Large mantids will ignore small prey, so a late season aphid problem is unlikely to be handled by adult mantids. In addition, mantids are generalist predators and potentially will consume beneficial insects such as bees in the absence of easier prey. Ladybugs are not frequently eaten because they are distasteful.

Finally, one of the only drawbacks to mantids is that if a continuous population is desired, their oothecae require vegetation to be left in the field over the winter, so new mantids will emerge in the springtime. If all plant materials are removed from the field, the mantid eggs will be removed as well.

In addition, mantid oothecae can often be harvested in small numbers from existing old field habitats in your area. But remember: leave some behind or you will diminish the local population that may already be lending a helping hand in pest control.