Since its introduction into Allentown, PA in the mid-1990s, the brown marmorated stink bug (BMSB), Halyomorpha halys (Hemiptera: Pentatomidae), has spread rapidly across the United States and parts of Canada. As BMSB populations increase, it transitions from being only a household nuisance pest to an agricultural pest that causes substantial yield losses in outbreak years. Both BMSB adults and nymphs have piercing-sucking mouthparts and feed on a wide range of crops including fruits, vegetables, soybeans, cotton, field corn, ornamentals, and nursery plants. Early-season damage to fruits and vegetables such as apples, tomatoes, peppers, and eggplants may cause premature fruit drop. Later in the season, feeding can result in visible external and internal scarring, reducing the percentage of marketable fruit. In some instances, losses can approach 100% on sweet corn, tomatoes, apples, and peppers. The most severe losses have occurred in the Mid-Atlantic states where BMSB has been established since the mid-1990s. Native species of stink bugs cause similar damage as BMSB, and management strategies developed for BMSB should also help reduce crop damage caused by native stink bugs. 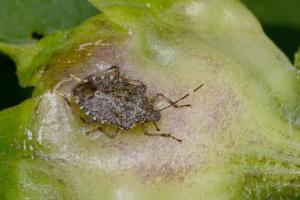 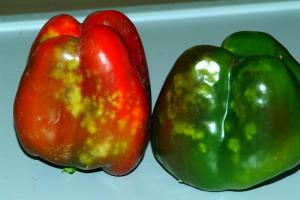 Figure 2. Stink bug damage to tomatoes and peppers results in discolored blemishes that are corky under the skin. Photo credit: Ricardo Bessin, University of Kentucky.

National Organic Program (NOP)-compliant insecticides have provided limited control of BMSB and are less effective than conventional sprays. Organic producers need to use an integrated program including cultural control, biological control, and physical methods to manage BMSB. Organic control tactics currently being explored include use of insectary plantings to increase natural enemies, trap crops to intercept BMSB before they colonize cash crops, and biological control. This fact sheet focuses on the use of selective mesh screens to physically exclude BMSB and native stink bugs from high value organically-produced crops.

Spun-bond row covers have been used by producers for many years for frost protection in the spring or fall and to exclude insect pests from crops—particularly when plants are small and less tolerant to feeding damage. Drawbacks of row covers include exclusion of pollinators and natural enemies of pests, susceptibility to damage by high winds, reduced light transmission, increasing temperatures in summer months, and costs of materials with limited life spans. Ideally, row covers should allow for good air circulation and light penetration as well as some movement of natural predators through the mesh to prevent secondary pest outbreaks under the screens.

Studies conducted on organically-managed farms at the Universities of Kentucky and Tennessee evaluated selective screening to exclude BMSB. Barrier screens with 1/6, 1/8, and 1/25 inch mesh size openings (see Sources of Netting below) were draped over frames and secured to the ground. Previous studies have shown that mesh sizes with openings larger than 1/6 inch do not exclude BMSB adults, and finer meshes are needed to exclude nymphs.

Low numbers of BMSB were present in Kentucky, while high numbers were present in Tennessee during these studies. In both states, the number of natural enemies on plants inside the 1/6 and 1/8 inch mesh screens were comparable to plants without exclusionary netting, while numbers were significantly reduced under the 1/25 inch netting. In Kentucky, outbreaks of aphids under 1/25 inch mesh suggests a higher risk of secondary pests under these fine-mesh screens due to the exclusion of natural enemies. In Tennessee, where BMSB numbers were higher than in Kentucky, the 1/25 inch mesh plots produced the greatest marketable yield, both due to the greater exclusion of pests and protection from sunscald. In Kentucky where BMSB numbers were low, there was no difference in marketable yield among the types of netting, all of which were superior to unprotected plants. In areas with higher BMSB pressure, finer meshes (1/25 inch) may provide greater exclusion of high stink bug populations and protection of fruit from sunscald. 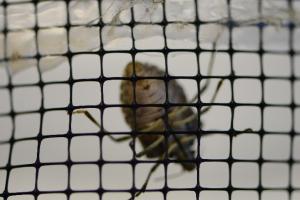 Figure 3. By selecting the proper sized netting, BMSB can be excluded while natural enemies are allowed to pass through. Photo credit: Ricardo Bessin, University of Kentucky.

Table 1. Summary of stink bug numbers, damage, fruit marketability, and sunscald of ‘Aristotle’ peppers harvested from screened plots and unscreened control plots at the UK Horticulture Research Farm and the UT Organic Crops Unit in 2013 and 2014.

Note: These sources are provided as examples and do not imply endorsement of any product or supplier.