Organic farming is a management system that requires the integration of cultural, biological and mechanical practices that foster the recycling of resources, promote ecological balance and conserve biodiversity (AMS--National Organic Program, 2002). Administration of antibiotics, hormones, growth-promoters and most synthetic medications are prohibited in animals producing organic food and fiber. However, these treatments cannot be withheld just to maintain the animal's organic status. Animal welfare must come first. However, if an animal receives a prohibited substance, that animal must be removed from organic production forever.

Organic rules elsewhere in the world differ from the United States regulations. Organic livestock production in the European Union (EU) is governed by EU Regulation 1804/99 and went into effect in 2000. Individual EU member states may have more stringent rules for their countries. EU organic regulations require that animals on organic farms have more living space, regular outdoor access and be fed a diet relying heavily on forage although there is an allowance for up to 5% of the feed to come from conventional sources until 2008. Prophylactic use of antibiotics (e.g., blanket dry cow treatment) is prohibited, but antibiotics may be used for treatment of disease as long as withdrawal times are prolonged (usually twice the label recommendation).

In 2006, Canada adopted its own organic standard (CAN/CGSB-32.310-2006); prior to that date, most Canadian certifiers used the U.S. organic standard.  The Canadian standard is a blend of European and U.S. regulations. Antibiotics are permitted for emergency use only. Milk must be withheld but the animal can retain its organic status.

As in the U.S., bovine mastitis is a major concern for dairy farmers, both conventional and organic. Little has been published regarding milk quality and udder health on organic dairies in the U.S. More information is available from the European Union, but their organic standards differ from that of the U.S. in that restricted antibiotic use, coupled with extended withholding times, is allowed.

No formal studies have studied milk quality on US organic dairies in depth, although a few authors have included limited milk quality data in publications.  Tikofsky, et al. (2003) reported, in a study on antimicrobial susceptibility of Staphylococcus aureus, that bulk milk SCC for organic farms in New York averaged 273,000 cells/ml, while bulk milk from similarly sized conventional herds included in the study averaged 559,300 cells/ml.

Also as a part of the previous study, 46 organic farms were surveyed. Sixty-seven percent of organic farmers employed the California Mastitis Test (CMT) regularly to evaluate milk quality; the majority of these producers did not use the CMT when they were conventional. Eleven percent of farms regularly participate in a DHIA cell counting program.

Once problem quarters are identified, 60% of farms milk them separately with a quarter milker and feed that milk to calves or discard. Eighty-five percent of organic respondents used iodine based pre-dips and post-dips and 90% used individual paper towels.

The National Mastitis Council's (NMC) Ten Point Plan has been advocated for years to help producers achieve and maintain high milk quality. However, U.S. organic farming methods preclude the use of dry cow antibiotic treatment, as well as lactational antibiotic treatment under any circumstances. Therefore, intensely monitoring udder health for the early detection of new mastitis cases, as well as proactively adapting management strategies are essential for organic dairies. An adaptation of the NMC plan, for farmer education, is provided below.

These will vary from farm to farm depending on the challenge facing the farm, the certifying agency, and producer philosophy. Realistic, achievable goals for the majority of farms are:

If contagious mastitis is present in a herd planning to transition to organic dairy production, all efforts should be made to identify, treat, and/or cull infected animals prior to transition. Strep ag is a highly contagious mastitis: even a few cows infected with Strep ag in a small herd (<30 cows) can cause bulk milk SCC to exceed the regulatory limit. Strep ag responds well to antibiotic treatment, so it is best to eradicate it before you begin to ship organic milk. In established organic herds, contagious mastitis can be more of a headache, but it can be managed with continued effort and monitoring.  Alternative therapy regimens usually yield disappointing results and are often impractical for use in large numbers of animals.

A suggested management plan is:

This can most easily be done with regular cell count testing through the Dairy Herd Improvement Association (DHIA), but effective monitoring with a strip cup, visual observation, and a CMT test can also achieve goals. Once a month, evaluate the udder health of all lactating animals. Cows with high cell counts on two consecutive DHIA tests or two monthly CMT tests should be cultured so they can be milked last, monitored, managed with an alternative therapy, or culled. Clinical mastitis cases should also be cultured so that intervention opportunities in the environment can be instituted. Semi-annual meetings with your certifier, veterinarian, and nutritionist to evaluate the current mastitis control program and review udder health goals are advised.

A proper milking routine should be instituted at all milkings and be followed by all milkers. Cows crave consistency so having a standardized procedure will reduce stress and enhance milk letdown and milkout. Components of a good milking procedure include the following.

The mechanical milking system should be evaluated by a qualified individual at least twice yearly and dynamic testing should be performed while the system is operating. Vacuum fluctuations, due to liner slips, flooding, inadequate vacuum reserve, and poorly functioning regulators, are likely to force bacteria up the teat end during milking and increase the risk of mastitis.

Rubber milking liners should be replaced every 1200 cow milkings or every 60 days, whichever comes first. Rubber used longer than this deteriorates and will develop microscopic cracks and ridges that hold mastitis bacteria even through the wash cycle (see Figure 2). Other rubber parts (hoses, tubes, gaskets) should be inspected regularly and replaced when worn. 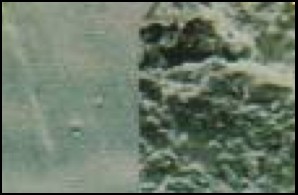 Although dry cow antibiotic therapy is not permitted in organic dairy production, this is still an important time for udder health improvement and rejuvenation of milking tissue. Energy intake should be reduced one week prior to dry off so that milk production is decreased. At dry off, the udder should be milked out one final time and the teat ends dipped with post milking teat dip twice daily for two weeks after dry off. It takes about two weeks for the keratin plug to seal the teat end and prevent the development of new infections during the dry period. Until those plugs form, we need to do our best to sanitize the teat end and prevent contamination by keeping the cow in a clean dry environment. As the cow dries up, changes occur in the mammary secretions that kill bacteria (increases in lactoferrin and alpha-lactoglobulin, increases in antibody levels) and help resolve existing infections. Nutrition of the dry cow is also important especially as she reaches the pre-fresh period. At this time, selenium and vitamin E levels become important for support of the immune and reproductive systems and to ensure the birth of a vigorous calf. The National Research Council recommends that 0.3 ppm per head per day of selenium and at least 1500 IU of vitamin E per head per day be fed. For continued udder health benefits, supplementation of selenium and vitamin E is recommended throughout lactation.

A clean comfortable environment is important to prevent new environmental infections and to prevent teat injuries. When cows are housed inside in winter, stalls should be scraped frequently and sufficient amounts of clean, dry bedding should be available. Pasture environments for dry cows in the summer are generally preferred but wet areas around ponds and streams should be fenced off so that they do not become muddy loafing areas.

Bringing new animals into an established herd is a risk for introducing many diseases (BVD and Johne's to name a few) besides mastitis into your herd.  Spending a little money up front to ensure the cows entering your herd are healthy may save thousands in disease eradication dollars. As mentioned before, multiple bulk tank samples should be cultured for both the usual mastitis bacteria and Mycoplasma. If this is not possible, new additions should be milked separately and cultured as soon as possible once they are added to the farm. Although farm-raised heifers are generally thought to be safe to introduce, they may also be infected and warrant similar segregation and testing protocols.

As contagious mastitis cows are identified, strategic culling methods should be used to slowly reduce the prevalence in your herd. Milk these cows separately. Place cows infected with contagious mastitis on the "Do Not Breed" list. As soon as possible, remove cows with continued high cell counts or scarred and abscessed bags. For herds with a high prevalence of Staph aureus cows that need to reduce bulk milk cell counts as soon as possible, infected quarters should be identified by culture and dried off to prevent that milk from entering the bulk tank and food supply.

A clean, dry comfortable environment is essential to good mastitis control. Properly sized, maintained and well-bedded stalls will prevent teat damage that may lead to S. aureus mastitis. Contagious mastitis cows should be segregated to one area of the barn so that infected milk that leaks onto bedding does not become a reservoir of potential problems for healthy cows. Since flies have been shown to spread mastitis, in particular S. aureus and A. pyogenes, good fly control is essential for the prevention of mastitis.

Replacement animals are the future of the herd and are a key element in maintaining low bulk milk SCC in herds battling contagious mastitis. If we can keep this group clean and healthy, the farm's financial future is ensured.

In herds that have problems with contagious mastitis and are feeding waste milk, a number of preventive measures are recommended. Calves should be separated while on milk and for two weeks after weaning. This is best accomplished via calf hutches but can also be accomplished by tying calves apart. Good fly control is essential during the summer months. If possible, pasteurize milk before feeding to calves. Although this does not sterilize the milk, it will drastically reduce the number of infective organisms. In herds with a known contagious mastitis problem, culture first calf heifers as they freshen. This allows you to identify infected cows early and segregate them.  Alternative therapies which enhance the immune system may have more of an effect if infections are caught early.

Summary of European Studies of Milk Quality on Organic Dairies