An Introduction to Cover Crop Species for Organic Farming Systems

The diversity of cover crop species and numerous planting combinations create opportunities for nearly every farming system to include cover crops. This article provides a brief introduction to the two main groups of plants used as cover crops, grasses and legumes, and presents considerations when selecting a single plant species or a mixture of species. The cover crop profiles (linked below) will help producers identify the benefits and risks of integrating cover crops into their farming system. Neighboring farmers, local agriculture agencies such as the Natural Resource Conservation Service (NRCS), and County Extension agents are the best resources for local cover crop production recommendations. 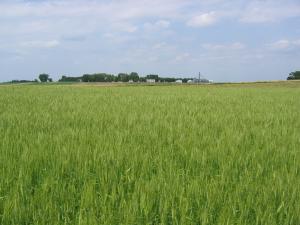 Cover crops are generally grouped according to their botanical classification. Two groups of plants, grasses and legumes, account for most of the plant species used as cover crops. However, there are many other excellent crops that offer a range of benefits to a farming system that do not fall into either of these groups including: buckwheat (Fagopyrum esculentum), a member of the buckwheat family (Polygonaceae); sunflower (Helianthus spp.), a member of the aster family (Asteraceae); and a wide variety of mustards (Brassica spp.) and forage radishes (Raphanus sativus) that are members of the crucifer family (Brassicaceae).

The grass family (Poaceae) of cover crops include grains and forage grasses such as cereal rye (Secale cereale L.), sorghum [Sorghum bicolor spp. bicolor], sorghum-sudangrass hybrids (Sorghum bicolor X S. bicolor var. sudanense), and wheat (Triticum aestivum). These crops are often grown to produce income, but they also make excellent cover crops due to the many ecological benefits they provide to the farming system. They establish quickly (an important characteristic for good weed suppression), produce high biomass and dense fibrous root systems (to prevent soil erosion, sequester carbon, increase soil organic matter content, and improve soil quality), and can scavenge and store available soil nutrients such as nitrogen (N) and potassium (to reduce nutrient losses due to leaching). Some grasses, especially rye, sorghum, and sorghum-sudangrass, further suppress weeds through the release of natural substances that inhibit the growth of neighboring plants, a process called allelopathy. Allelopathic substances from rye, sorghum-sudangrass, and other cover crops have been shown to inhibit the emergence and early growth of many weeds.

Legumes are a large group of plants in the bean family (Fabaceae) that includes vetch (Vicia spp.), clover (Trifolium spp.), field peas (Pisum sativum), cowpea (Vigna unguiculata), and soybean (Glycine max). Most plants in this group have a beneficial relationship with specific soil bacteria (Rhizobium spp.). The bacteria form nodules and live in the plant's roots, and convert N2 gas from the surrounding air to plant-available nitrate in a process called nitrogen fixation. Thus, legumes are grown primarily to provide a source of N to a subsequent crop and are most beneficial when the soil N levels are low. Legumes can produce substantial biomass, attract beneficial insects, and suppress weeds through competition and, in some cases, allelopathy.

Single species of cover crops are often planted if operational constraints limit selection to a single species or when a farmer's objective is known to be best fulfilled by a specific plant species. For example, some cover crops such as sunn hemp, a summer-planted legume, suppress particular species of soil pathogenic nematodes. The cover crop creates an environment below the soil that is unfavorable for nematodes. Nematodes produce less young when they are under stress. Over time, the unfavorable environment results in a reduction of active nematodes in the soil. Other advantages of planting a single species of cover crop include ease of planting and uniform establishment and maturity. Disadvantages include increased risk of poor establishment and development due to adverse weather conditions or pests, and a more limited range of benefits to the cropping system. In addition, a grain or grass cover crop monoculture may tie up soil N after the cover crop is tilled in or otherwise terminated, while a legume monoculture may release soluble N so rapidly that much of it leaches before the subsequent crop can utilize it.

Mixtures of cover crop species are planted to optimize carbon to nitrogen (C:N) balance, obtain multiple benefits, or more fully achieve a particular objective such as organic matter production or weed suppression. At maturity (flowering), a grass-legume cover crop biculture often contains organic carbon and nitrogen in a ratio of 25:1 to 30:1, which promotes a slow release of N that the subsequent crop can utilize efficiently. Fresh organic residues with C:N ratios in this range also form the most stable humus as they decompose. In addition, planting a mixture of cover crops can reduce risk of crop failure; although it can require additional planning and labor. 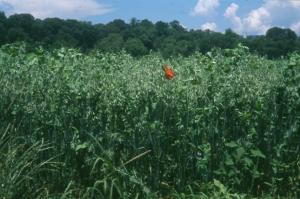 Allelopathy is known to be a species-specific phenomenon. Thus, planting mixtures of cover crops can enhance the cover crop's allelopathic potential by achieving a broader spectrum of weed control because each cover crop species contributes allelopathic activity towards a specific weed species.

Mixtures can also be planted to influence insect populations. Cover crops can be selected to attract beneficials or deter pests. Like the previous examples, many of these cover crop-insect relationships are species specific, so a little homework can go a long way in making sure the objectives are achieved.