Sorghum-sudangrass hybrids are unrivaled for adding organic matter to worn-out soils. These tall, fast-growing, heat-loving summer annual grasses can smother weeds, suppress some nematode species and penetrate compacted subsoil if mowed once. Seed cost is modest. Followed by a legume cover crop, sorghum-sudangrass hybrids are a top choice for renovating over-farmed or compacted fields. The hybrids are crosses between forage-type sorghums and sundangrass. Compared with corn, they have less leaf area, more secondary roots, and a waxier leaf surface, traits that help them withstand drought (Sarrantonio, 1994). Like corn, they require good fertility—and usually supplemental nitrogen—for best growth. Compared with sudangrass, these hybrids are taller, coarser, and more productive. Forage-type sorghum plants are larger, leafier, and mature later than grain sorghum plants. Compared with sorghum-sudangrass hybrids, they are shorter, less drought tolerant, and don’t regrow as well. Still, forage sorghums as well as most forms of sudangrass can be used in the same cover-cropping roles as sorghum-sudangrass hybrids. All sorghum- and sudangrass-related species produce compounds that inhibit certain plants and nematodes. They are not frost tolerant, and should be planted after the soil warms in spring or in summer at least six weeks before first frost.

Sorghum-sudangrass grows 5 to 12 feet tall with long, slender leaves, stalks up to one-half inch in diameter, and aggressive root systems. These features combine to produce ample biomass, usually about 4,000 to 5,000 lb. DM/A. Up to 18,000 lb. DM/A has been measured with multiple cuttings on fertile soils with adequate moisture. 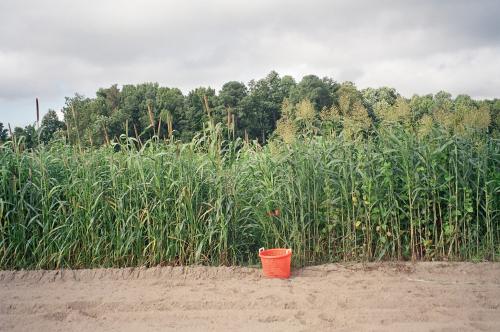 Mowing whenever stalks reach 3 to 4 feet tall increases root mass five to eight times compared with unmowed stalks and forces the roots to penetrate deeper. In addition, tops grow back green and vegetative until frost and tillering creates up to six new, thicker stalks per plant. A single mowing on New York muck soils caused roots to burrow 10 to 16 inches deep compared to 6 to 8 inches deep for unmowed plants. The roots of mowed plants fractured subsoil compaction with wormhole-like openings that improved surface drainage. However, four mowings at shorter heights caused plants to behave more like a grass and significantly decreased the mass, depth, and diameter of roots (Mishanec, 1996; Wolfe, 1994; Zhu et al., 1998).

Planting sorghum-sudangrass hybrids instead of a host crop is a great way to disrupt the life cycles of many diseases, nematodes, and other pests. For example, when sorghum-sudangrass or sorghum alone was no-tilled into endophyte-infected fescue pastures in Missouri that had received two herbicide applications, the disease was controlled nearly 100 percent. No-till reseeding with endophyte-free fescue completed this cost-effective renovation that significantly improved the rate of gain of yearling steers (Bagegni et al., 1994).

The combination of abundant biomass production, subsoiling root systems, and weed and nematode suppression can produce dramatic results. On a low-producing muck field in New York where onion yields had fallen to less than a third of the local average, a single year of a dense planting of sorghum-sudangrass hybrid restored the soil to a condition close to that of newly cleared land (Jacobs, 1995).

Sorghum-sudangrass hybrids can be grown throughout the U.S. wherever rainfall is adequate and soil temperature reaches 65°F to 70°F at least two months before frost. Once established, they can withstand drought by going nearly dormant. Sorghum-sudangrass hybrids tolerate pH as high as 9.0, and are often used in rotation with barley to reclaim alkaline soil (University of California Cover Crops Working Group, 1996). They tolerate pH as low as 5.0.

Sorghum-sudangrass is prized as summer forage. It can provide quick cover to prevent weeds or erosion where legume forages have been winter-killed or flooded out. Use care because these hybrids and other sorghums can produce prussic acid poisoning in livestock. Grazing poses the most risk to livestock when plants are young (up to 24 inches tall), drought stressed, or killed by frost. Toxicity danger varies among cultivars.

Plant sorghum-sudangrass when soils are warm and moist, usually at least two weeks after the prime corn-planting date for your area. It will tolerate low-fertility, moderate acidity, and high alkalinity, but prefers good fertility and near-neutral pH (Sarrantonio, 1994). Standard biomass production usually requires 75 to 100 lb. N/A. With sufficient surface moisture, broadcast 40 to 50 lb./A, or drill 35 to 40 lb./A as deep as 2 inches to reach moist soil. These rates provide a quicker canopy to smother weeds than lower rates used for forage production, but they require mowing or grazing to prevent lodging. A pass with a mechanical weeder may be necessary if germination is spotty or perennial weeds are a problem. New York on-farm tests show that a stale seedbed method— tilling, then retilling to kill the first flush of weeds just before planting—provides effective weed control. 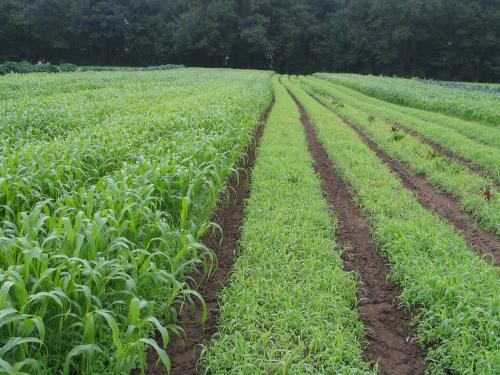 Figure 2. Sorghum-Sudangrass plus red clover were sown in these permanent beds after vegetables in western Massachusetts. On the left, seeding was done in mid-August; on the right, at end of August. By mid-September it is now too cool for the Sudax to put on much more growth, showing the importance of timing when seeding this heat-loving crop in temperate areas. Photo and caption credit: Vern Grubinger, University of Vermont Extension.

Plants grow very tall (up to 12 feet), produce tons of dry matter, and become woody as they mature. This can result in an unmanageable amount of tough residue that interferes with early planting the following spring (Mishanec, 1996). Mowing or grazing when stalks are 3 to 4 feet tall encourages tillering and deeper root growth, and keeps regrowth vegetative and less fibrous until frost. For mid-summer cuttings, leave at least 6 inches of stubble to ensure good regrowth and continued weed suppression. Delayed planting within seven weeks of frost makes mowing unnecessary and still allows for good growth before winter-killing (Mishanec, 1996; Sarrantonio, 1994). Disking while plants are still vegetative will speed decomposition. Make several passes with a heavy disk or combination tillage tool to handle the dense root masses (Mishanec, 1996). Sicklebar mowing or flail chopping before tillage will reduce the number of field operations required to incorporate the crop and speed decomposition. Sicklebar mowers cut more cleanly but leave the stalks whole. Using a front-mounted flail chopper avoids the problem of skips where tractor tires flatten the plants, putting them out of reach of a rear-mounted chopper. Any operations that decrease the residue size shortens the period during which the decomposing residue will tie up soil nitrogen and hinder early planted crops in spring. Even when mowed, residue will become tough and slower to break down if left on the surface. Flail chopping after frost will create a suitable mulch for no-till planting, preserving soil life and soil structure in non-compacted fields.

Sorghum-sudangrass hybrids and other sorghum-related crops and cultivars suppress some species of nematodes. Specific cultivars vary in their effectiveness on different races of nematodes. These high-biomass-producing crops have a general suppressive effect due to their organic matter contributions. But they also produce natural nematicidal compounds that chemically suppress some nematodes, many studies show. Timing of cutting and tillage is very important to the effectiveness of nematode suppression. The cover crop needs to be tilled before frost while it is still green. Otherwise, the nematicidal effect is lost. For maximum suppression of soilborne diseases, cut or chopped sudangrass must be well incorporated immediately (Orfanedes et al., 1995). For suppressing root-knot nematodes in Idaho potato fields, rapeseed has proven slightly more effective and more dependable than sorghum-sudangrass hybrids (Stark, 1995). In an Oregon potato trial, 'Trudan 8' sudangrass controlled Columbia root-knot nematodes (Meloidogyne chitwoodi), a serious pest of many vegetable crops. Control extended throughout the zone of residue incorporation. The cover crop’s effect prevented upward migration of the nematodes into the zone for six weeks, working as well as the nematicide ethoprop. Both treatments allowed infection later in the season (Mojtahedi et al., 1993). In the study, 'Trudan 8' sudangrass and the sorghum-sudangrass hybrid cultivars 'Sordan 79' and 'SS-222' all reduced populations of root-knot nematodes. These cultivars are poor nematode hosts and their leaves—not roots—have a nematicidal effect. 'Trudan 8' should be used if the crop will be grazed due to its lower potential for prussic acid poisoning. The sorghum-sudangrass cultivars are useful if the cover crop is intended for anti-nematicidal effects only (Mojtahedi et al., 1993). In other Oregon and Washington trials, the cover crop suppression required supplemental chemical nematicide to produce profitable levels of U.S. No. 1 potatoes (Mojtahedi et al., 1993). These same sudangrass and sorghum-sudangrass hybrid cultivars failed to show any significant nematicidal effects in a later experiment in Wisconsin potato fields (MacGuidwin and Layne, 1995). When faced with infestations of the nematodes Meloidogoyne incognita and M. arenaria, Oswego, NY, onion grower Dan Dunsmoor found that a well-incorporated sorghum-sudangrass cover crop was more effective than fumigation. Further, the nematicidal effect continued into the next season, while the conditions a year after fumigation seemed worse than before the application. He reports that the sorghum-sudangrass cover crop also controls onion maggot, thrips, and Botrytis leaf blight (Jacobs, 1995).

There are several strategies for reducing nitrogen tie-up from residue:

These plants produce chemicals that inhibit certain weeds and nematodes. If you kill the cover crop early enough in fall, the residue will partially break down before cold temperatures slow biological action (Sarrantonio, 1994). Where possible, use sorghum-sudangrass ahead of later-planted crops to allow more time in spring for residue to decompose. Planting sorghum-sudangrass every third year on New York potato and onion farms will rejuvenate soil, suppress weeds, and may suppress soil pathogens and nematodes. Working a legume into the rotation will further build soil health and add nitrogen. Sorghum-sudangrass hybrids can provide needed soil structure benefits wherever intensive systems cause compaction and loss of soil organic matter reserves. Grown as a summer cover crop that is cut once and then suppressed or killed, sorghum-sudangrass can reduce weeds in fall-planted alfalfa. Sorghum-sudangrass suppressed alfalfa root growth significantly in a Virginia greenhouse study (Forney and Chester, 1984), but no effect was observed on alfalfa germination when alfalfa was no-till planted into killed or living sorghum-sudangrass (Forney et al., 1985). In Colorado, sorghum-sudangrass increased irrigated potato tuber quality and total marketable yield compared. It also increased nutrient uptake efficiency on the sandy, high pH soils. In this system, the sorghum-sudangrass is grown with limited irrigation, but with enough water so that the biomass could be harvested for hay or incorporated as green manure (Delgado and Lemunyon, 2006; Delgado et al., 2007). In California, some table grape growers use sorghum-sudangrass to add organic matter and to reduce the reflection of light and heat from the soil, reducing sunburn to the grapes.

Sorghum-sudangrass hybrids can produce more organic matter per acre, and at a lower seed cost, than any major cover crop grown in the U.S. Incorporated sorghum-sudangrass residue reduces N availability to young crops more than oat residue but less than wheat residue (Smith and Sharpley, 1990).

When comparing sorghum-sudangrass cultivars, consider traits such as biomass yield potential, tillering and regrowth ability, disease resistance, insect resistance (especially if greenbugs are a problem), and tolerance to iron deficiency chlorosis. If you plan to graze the cover crop, select sorghum-sudangrass hybrids and related crops with lower levels of dhurrin, the compound responsible for prussic acid poisoning. For maximum weed control, choose types high in sorgoleone, the root exudate that suppresses weeds. Sterile cultivars are best where escapes could be a problem, especially where crossing with johnsongrass (Sorghum halpense) is possible.