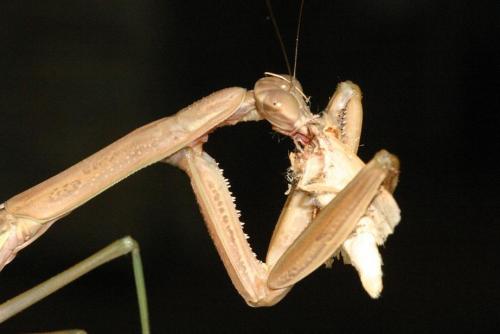 Parasitoids (sometimes called parasites) do not usually eat their hosts directly. Adult parasitoids lay their eggs in, on, or near their host insect. When the eggs hatch, the immature parasitoids use the host as food. Many parasitoids are very small wasps and are not easily noticed. Tachinid flies are another group of parasitoids. They look like large houseflies and deposit their white, oval eggs on the backs of caterpillars and other pests. The eggs hatch, enter the host, and kill it. Parasitoids often require a source of food in addition to their host insect, such as nectar or pollen. 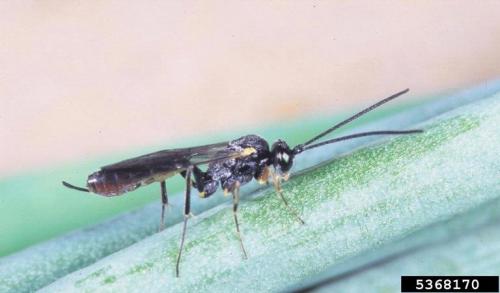 Pathogens are disease-causing organisms. Just as many other organisms get sick, so do insects. The main groups of insect disease-causing organisms are insect-parasitic bacteria, fungi, protozoa, viruses, and nematodes. Biological control using pathogens is often called microbial control. One very well-known microbial control agent that is available commercially is the bacterium Bacillus thuringiensis (Bt). Because not all formulations of Bt are approved for use in organic systems, it is important to check with your certifier before using this. Several insect-pathogenic fungi are used as microbial control agents, including Beauveria, Metarhizium, and Paecilomyces. These are most often used against foliar insect pests in greenhouses or other locations where humidity is relatively high. Nuclear polyhedrosis viruses (NPV) and granulosis viruses (GV) viruses are available to control some caterpillar pests. The insect-parasitic (entomopathogenic or insecticidal) nematodes, Steinernema and Heterorhabditis, infect soil-dwelling insects and occur naturally or can be purchased. As with all biological control agents, it is especially important to match the correct microbial control agent with the correct pest in order for them to be effective. 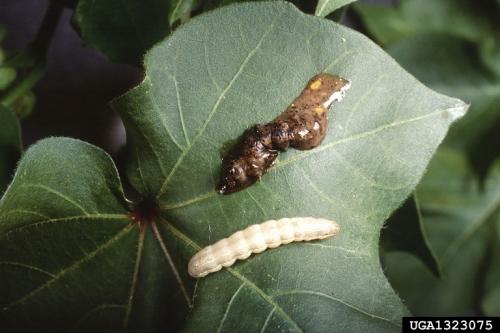 Biological control can be natural: conservation of natural enemies or applied: inoculation or inundation.

In many cases, purchasing natural enemies to provide biological control agents is not necessary. Natural enemies are common and a grower can design production systems to attract and keep the natural enemies in the system by providing environmental conditions conducive to the enemies' survival. Farmscaping is a term sometimes used to describe the creation of habitat to enhance the chances for survival and reproduction of beneficial organisms. For example, many adult predators and parasitoids feed on nectar and pollen, so it is essential to have these resources nearby. Having several species of pollen- and nectar-producing plants in an area will provide resources more continuously than only having one species. Many members of the Apiaceae (also known as Umbelliferae) family are excellent insectary plants. The flowers of fennel, coriander (cilantro), dill, and wild carrot are especially attractive to parasitoid wasps.

Organic mulches and crop residue moderate fluctuations of temperature and moisture and can provide hiding places for soil-dwelling insect predators such as ground (carabid) and rove (staphylinid) beetles, spiders, and centipedes. Undisturbed areas, such as windbreaks, hedgerow, or strips of perennial vegetation within fields (beetle banks), provide refuge habitat where beneficial insects can live and reproduce. Other habitats provided by farmscaping include water, alternate prey, perching sites, overwintering sites, and wind protection. Some refuge planting can harbor pests, so the success of farmscaping efforts depends on knowledge of pests and beneficial organisms.

Even pesticides allowed in organic production are insecticidal, and beneficial insects are often susceptible to the same pesticides used to control pest insects. If a pesticide must be used to control a pest outbreak, it should be applied in a manner to conserve beneficial insects. Application methods that result in low environmental exposure of beneficial organisms to pesticides should be used—for example, enclosed baits, low volume or spot treatment, or application at times of day when beneficials are not active.

Inoculation and inundation involve the supplemental release of natural enemies to build populations of beneficial organisms. Many biological and microbial control agents are commercially available for purchase.

An inoculative approach involves the release of natural enemies at a critical time of the season to augment natural populations already present, but in numbers too low for effective pest management.

An inundative approach involves the application of a large number of organisms much in same manner as a pesticide. The applied organisms, which may or may not become established, can be used for relatively fast-acting, short-term control. Parasitoids such as Trichogramma are often released in vegetable or field crops at a rate of 5,000 to 200,000 per acre per week depending on level of pest infestation. Insect-parasitic (entomopathogenic) nematodes are often applied at a rate of 1 million to 1 billion nematodes per acre.

Information about rates and timing of release are available from suppliers of beneficial organisms. The quality of commercially available biocontrol agents is an important consideration. Biological and microbial control agents are living organisms, and must not be mishandled during shipping, storage, or application.