Insect viruses are obligate disease-causing organisms that can only reproduce within a host insect. They can provide safe, effective and sustainable control of a variety of insect pests, although they are most effective as part of a diverse integrated pest management program. Some viruses are produced as commercial products, most notably for fruit pests, but many others are naturally occurring and can initiate outbreaks without additional inputs. The most common and effective type of insect viruses are the baculoviruses, which as a group are known to infect over 600 insect species worldwide. Most baculoviruses infect caterpillars, which are the immature form of moths and butterflies. Insect viruses are potent population regulators of many caterpillar pests.  All are highly specific in their host range, usually limited to a single type of insect. At the time that this article was written (2008), these include Gemstar LC (Certis USA) [(nuclear polyhedrosis virus of Heliothis/Helicoverpa spp. (e.g., corn earworm, tobacco budworm)]; Spod-X LC (Certis USA) [(nuclear polyhedrosis virus of Spodoptera spp. (e.g., beet armyworm)]; CYD-X (Certis USA) and Virosoft CP4 (BioTEPP, Inc.) (granulosis virus of Cydia pomonella, the codling moth); and CLV LC (Certis USA) [nuclear polyhedrosis virus of Anagrapha falcipera, the celery looper].

Caution: the use of any unapproved material can result in the loss of certification. Always check with your certifier before purchasing or using a new product or material to ensure that it is permitted for use in your organic farming system. For more information, read the related article: Can I Use This Input On My Organic Farm? 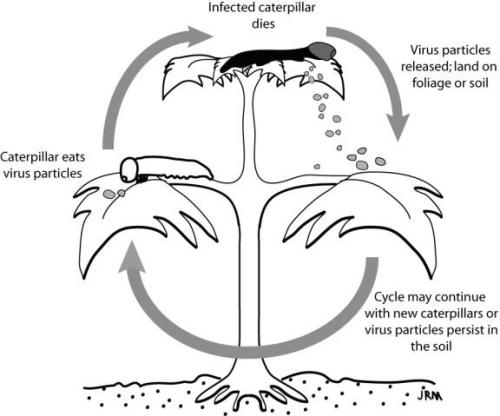 Virus infection begins in the insect’s digestive system but spreads throughout the whole body of the host in fatal infections. The body tissues of virus-killed insects are almost completely converted into virus particles. The digestive system is among the last internal organ system to be destroyed, so the insects usually continue to feed until they die. Infected insects look normal until just prior to death, when they tend to darken in color and behave sluggishly. They often develop more slowly than uninfected individuals.

Most virus-infected insects die attached to the plant on which they feed. Virus-killed insects break open and spill virus particles into the environment. These particles can infect new insect hosts. Because of the destruction of the internal tissues, dead insects often have a “melted” appearance. The contents of a dead insect can range from milky-white to dark brown or black.

Advantages and Disadvantages of Insect Viruses for Controlling Pests

Insect viruses are unable to infect mammals, including humans, which makes them very safe to handle. Most insect viruses are relatively specific, so the risk of non-target effects on beneficial insects is very low. Many viruses occur naturally and may already be present in the environment. Even in cases where they are applied, successful infections can perpetuate the disease outbreak making repeat applications within a season unnecessary.

Most insect viruses take several days to kill their host insect, during which the pest is still causing damage. Insect death is also dose dependent, and very high doses are often necessary for adequate control. As insects age, they can become less susceptible to virus infection, so viruses are usually only effective against early larval life stages.

Although viruses can persist in the environment for months or years, exposed virus particles, like those on the surface of plants, are quickly inactivated by direct sunlight or high temperatures, which can limit their persistence within a given season. Also, some agricultural practices can reduce persistence between seasons, such as tillage, which buries virus particles in the soil.

Suggestions for application of insect viruses

Viruses are usually not “stand alone” solutions to an insect pest problem, but are most effective in conjunction with other management strategies. Although there are not many commercial products available in the United States right now, several are being developed and may become available in the near future.  Not all commercially-available insect viruses are allowed for use in organic systems.  Check with your certifier to determine if the product that you are planning to use is allowed.

If there is a viral product available, there are several things the grower can do to increase effectiveness: