This article provides general information on blueberry roots and highlights recent work on the topic as part of a multi-year research project investigating organic production options for highbush blueberry in the Pacific Northwest. For more information on this project, see Organic Blueberry Production Research Project.

Highbush blueberry roots are relatively shallow compared to other perennial fruit crops (Fig. 1). The roots are generally located in the top 1.5 feet (~0.5 m) of soil and are most concentrated near the soil surface. Nutrients are absorbed mostly through the finest roots. The average size of these fine roots is only about 20–75 micrometers in diameter (Valenzuela-Estrada et al., 2008). In comparison, a human hair is about 80 micrometers in diameter. 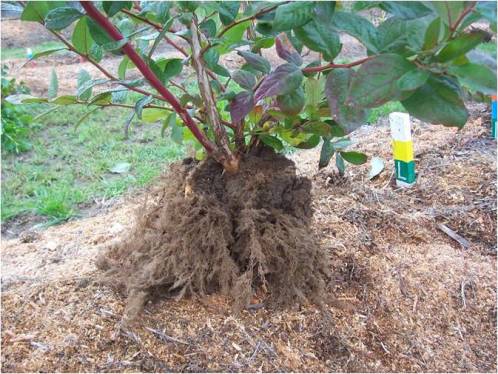 Figure 1. Root ball of a "Duke" blueberry plant. The plant was dug up in October 2007 after one growing season. Photo credit: Bernadine Strik, Oregon State University.

Highbush blueberries grow best on well-drained soils that have a high organic matter content and a pH of 4.2–5.5 (Strik et al., 1993). Blueberry plants, however, are relatively intolerant of high soil salt content, which is often measured as soil electrical conductivity (EC). Soil EC reflects the amount of nutrients, including nitrogen, in the soil solution. High EC values indicate an excess of nutrients that can damage the roots, stunt plant growth, and—in severe cases—kill the plants.

Objective: Evaluate the effects of organic management systems on soil water and nutrient availability and the distribution of blueberry roots. The management systems being compared include flat vs. raised planting beds, sawdust mulch vs. weed mat (used for weed control), and two different rates of organic fish fertilizer: 25 and 50 lb/acre of N (29 and 57 kg/ha of N).The timing of new root development is also being examined. The knowledge of when new root growth occurs will be useful for determining when and where irrigation water and fertilizers should be applied.

Roots are monitored in this study by way of a series of digital photographs, which are taken in the soil every two weeks (Fig. 2). The photographs are taken inside clear plastic tubes, referred to as minirhizotrons, which are installed near the plants at a depth of approximately 2 feet (60 cm). From these images, information is gathered about when new roots appear and when old roots die, the total number of new roots produced on the windows, root diameter and length, and any changes in root color.

The fertility available to the roots is monitored using plant-root simulator probes (PRS probes). The PRS probes absorb nutrients in a manner similar to plant roots and are used to evaluate the total amount of soil nutrients available to the plants. Soil solution is also being analyzed. Soil solution is extracted with syringe-like devices called suction lysimeters. The lysimeters are buried at two different soil depths, 6–10 inches (15–25 cm) and 14–18 inches (35–45 cm), which represent the predominant rooting depth and below, respectively. The pH, EC, and nitrogen (nitrate and ammonium) concentration of the soil solution is then determined in the laboratory. Finally, soil water content is measured at 0–30 cm depth by time-domain reflectometry (TDR).

After the first three years of the experiment, the plants produced more roots (1) in raised beds than in flat beds, (2) with sawdust mulch than with weed mat, and (3) with the lower rate of fish fertilizer than with higher rate of fertilizer (Fig. 3). Plants on raised beds and grown with less fertilizer also produced deeper roots (Fig. 4). In 2009, during the third year after planting, a flush of new root growth was observed immediately after fruit harvest (data not shown).

Figure 3. Effects of bed type (A), weed control method (B), and amount of organic fish fertilizer (C) on new root production in "Duke" blueberry. Different letters above the bars indicate a significant difference at P = 0.05. 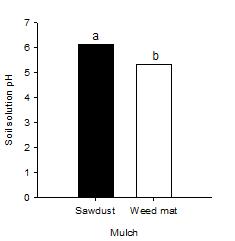 Soil solution EC level was very low (less than 0.3 mS/cm) at both the low and high fertilizer rates, which indicates both rates were low enough to avoid salt injury to the plants. Blueberries are considered sensitive to soluble salt concentrations above 2 mS/cm.

Total nitrogen (nitrate and ammonium) availability was higher, as expected, when more fertilizer was applied, but was similar in raised and flat beds, as well as under sawdust mulch and weed mat. 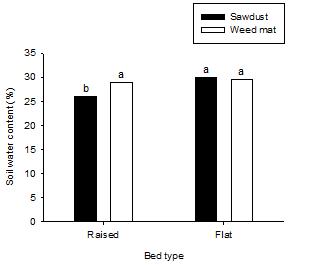 Figure 6. Soil water content measured at a depth of 0–30 cm in flat and raised beds covered with sawdust mulch or weed mat. Values were averaged over the 2009 season. Different letters indicate a significant difference among treatments at P = 0.05.