This article provides an overview of a multi-year research project to investigate organic production options for highbush blueberry in the Pacific Northwest. The project was initiated in response to industry requests and was designed with input from an advisory group that included growers using both conventional and organic production systems, as well as leaders in the nursery and fresh- and processed fruit handling industries. The goal of the project is to evaluate different planting methods, cultivars, fertilization, irrigation, and weed management practices for their efficacy and production costs in establishing an organic blueberry field.

Total acreage of cultivated highbush blueberries has continued to increase in both North America and other areas in the world. Blueberry consumption has also risen, but the increase in blueberry production has outpaced demand in the recent years (2008 and 2009), which lowered wholesale prices and thus reduced grower returns. This is a change from over 10 years of favorable markets for processed and fresh fruit, which encouraged growers to increase blueberry acreage. The growth in markets and production is highly related to the emphasis on positive health benefits of blueberries used in marketing campaigns starting in 1997. The volume of blueberries sold fresh, as opposed to frozen, hit a record high of 60% of total production in 2009, as reported by the US Highbush Blueberry Council (NASS, 2010). This reflects the importance of fruit quality and fresh fruit market options.

The market for organic blueberries is very strong. There were an estimated 480 acres of organic blueberries in North America in 2003. Although a detailed survey on organic blueberry acreage has not been done since 2003, the total organic berry crop acreage in the USA was 8,140 acres in 2008 (ERS, 2010). Over 60% of the organic berry crop acreage was located in California and was mainly strawberries, while about 20% was located in Oregon and Washington and was mainly blueberry. Historical data on organic blueberry prices compared to conventional are not available. In other berry crops, wholesale prices for organic fruit were 5% to 25% higher in raspberries and 48% to 135% higher in strawberries in 2008 (ERS, 2010). With record prices for fresh and processed blueberries in 2006 and 2007, wholesale organic prices were 20% to 50% higher than conventional. In 2008 and 2009, the difference between organic and conventional price was about 20% to 55%, depending on the fruiting season.

The long-term goal of this project is to develop organic production systems for highbush blueberry that:

The study was established at the Oregon State University North Willamette Research & Extension Center in 2006 in a transitional field that was certified organic in May, 2008. Following standard industry practices, typical "two-year-old" plants were obtained from a commercial nursery and planted 2.5 feet apart within rows and 10 feet apart between rows in the month of October. Soil at this site is a Willamette silt loam favorable for blueberry production with 3.7% organic matter content and a pH of 4.9. No organic material was incorporated into the soil prior to planting. A grass cover crop is grown in the row middles. Plants are irrigated using a single lateral of drip tubing with 0.5 gallon-per-hour in-line emitters spaced every 12 inches.

The experimental design is a split-split plot with 5 replicates. Treatments consist of two cultivars (‘Duke’ and ‘Liberty’), two production methods (raised bed or flat ground), three weed management practices [sawdust mulch + hand (or mechanical) weed management; compost (yard debris) + sawdust mulch + organically-approved herbicides as needed; and landscape fabric (weed mat) with sawdust mulch in the plant hole], and two types and rates of organic fertilizer (feather meal and liquid fish fertilizer at 25 or 50 lb N/a). The raised- and flat beds are randomly assigned to single rows as main plots, and within them, fertilizer treatments are randomly assigned as subplots, and cultivar and weed management practices are randomly assigned as sub-subplots. Each sub-subplot is 15 feet long and consists of six plants spaced 30 inches apart.

Topics under investigation in this research project include:

Objective: Compare the performance of an early-season and a late-season fruiting cultivar under organic management.

Due to varietal differences in plant growth and nutrient and water requirements, there may be advantages to certain cultivars under organic management. Two popular fresh-market cultivars, ‘Duke’ and ‘Liberty’, are being compared. ‘Duke’, an early-season cultivar, is one of the most popular cultivars grown in the U.S. ‘Duke’ is considered a more difficult cultivar to grow with regard to soil and fertility requirements. ‘Liberty’ is a relatively new late-season cultivar that has been widely planted in the Pacific Northwest. ‘Liberty’ is considered a high-vigor cultivar, perhaps requiring less nitrogen fertilizer than the lower-vigor ‘Duke’.

Raised beds are the industry standard for highbush blueberry prodution worldwide. However, on a site with well-drained soil, raised beds may not be necessary. Flat ground plantings may be easier to manage for irrigation and weeds than raised bed systems. Raised beds were formed with a tractor powered bed shaper and were initially 12 inches high with a 15-inch wide flat top and a 5-foot wide base; beds have settled slightly.

Objective: Develop compost for blueberry production that provides N over the long-term without causing damage to plants due to high pH or high salt content. 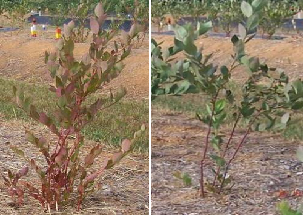 Fish emulsion and feather meal are two organic fertilizers commonly used by blueberry growers in this region. Prior research with conventional fertilizers found that young blueberry plants do not need much nitrogen fertilizer, but do need nitrogen throughout much of the growing season. In this study we are comparing a low rate (25 lb N/a) of N, a similar quantity to what we have found newly established plants require in conventional systems and a high rate of N (50 lb N/a), more typical (or lower) than the rate growers are applying in the establishment year. Based on soil and plant nitrogen observations, fertilizer rates and application timing have been addressed annually and modified as needed. 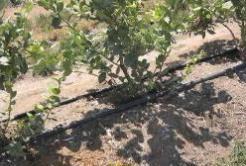 Objective: Determine the water requirements for irrigating blueberry by drip.

Irrigation is required in most growing regions for commercial production of blueberry. Drip is the preferred method of irrigation for organic production because water is delivered in small, focused areas along the row, reducing unwanted seed germination and weed growth. If drip irrigation lines are positioned beneath weed mat, the combination of the two strategies eliminates weeds within the row almost completely. Drip may also reduce disease problems compared to overhead irrigation by allowing leaves, flowers, and fruit to stay dry after each water application.

Weed management is one of the top challenges in blueberry production nationwide, particularly in organic fields. Organic weed control options often cost more and can be less effective than conventional herbicide strategies. Sawdust mulch is commonly used in both conventional and organic production systems to help control annual weeds, to improve soil organic matter, and to moderate changes in soil moisture and temperature. However, high C:N ratio mulches, like fresh sawdust, require additional fertilizer nitrogen in order to compensate for N immobilization. Yard debris compost, commonly used in organic blueberry production systems, may be used as a mulch and offer advantages in nutrient management. Many growers are using compost in combination with sawdust mulch. A plastic landscape fabric, permeable to water (weed mat), can generally provide greater physical weed suppression than sawdust mulch, but has significant initial material costs and the impact of weed mat on blueberry plant growth has not been studied in our temperate climate. Finally, any weed suppressing mulch eventually requires supplemental weed control, which in organic systems may include organically approved herbicides, hand weeding or hoeing, and mechanical methods of weed control.

Objective: Evaluate the effect of organic management systems on root distribution and availability of water and nutrients.

The availability of mineral nutrients to blueberry plant roots can be affected by soil water status, soil temperature, and the types of surface mulch or fertilizer amendments. Blueberry plants are susceptible to root rot from over irrigation, but they are also susceptible to drought injury due to relatively shallow root systems. Good root system development is important for plant growth and fruit yield.