Nematodes are microscopic, wormlike organisms (Fig. 1) that live in water films and water-filled pore spaces in the soil. Typically, they are most abundant in the upper soil layers where organic matter, plant roots, and other resources are most abundant. Nematode abundance in soils—managed and unmanaged—ranges from 1–10 million individuals/m2 (Peterson and Luxton, 1982; Lavelle and Spain, 2001).

Most research on soil nematodes has focused on the plant-parasitic nematodes that attack the roots of cultivated crops. Less attention has been given to nematodes that are not plant-feeders and play beneficial roles in the soil environment. This article describes the important roles played by nematodes in soil ecosystems, as well as their potential to be used as indicators of soil condition in organic farming systems.

Nematodes can be classified into functional groups based on their feeding habits, which can often be deduced from the structure of their mouthparts (Fig. 2). In agricultural soils, the most common groups of nematodes are the bacterial-feeders, fungal-feeders, plant parasites, predators, and omnivores. Predatory nematodes feed on protozoa and other soil nematodes. Omnivores feed on different foods depending on environmental conditions and food availability; for example, omnivorous nematodes can be predators, but in the absence of their primary food source, they can feed on fungi or bacteria.

Figure 2. Nematodes can be classified into different feeding groups based on the structure of their mouthparts. (a) bacterial feeder, (b) fungal feeder, (c) plant feeder, (d) predator, (e) omnivore. Figure credit: Ed Zaborski, University of Illinois.

Importance of Nematodes in Agricultural Systems

Nematodes contribute to a variety of functions within the soil system. In agricultural systems, nematodes can enhance nutrient mineralization and act as biological control agents.

Soil nematodes, especially bacterial- and fungal-feeding nematodes, can contribute to maintaining adequate levels of plant-available N in farming systems relying on organic sources of fertility (Ferris et al., 1998). The process of converting nutrients from organic to inorganic form is termed mineralization; mineralization is a critical soil process because plants take up nutrients from the soil primarily in inorganic forms. Nematodes contribute directly to nutrient mineralization through their feeding interactions. For example, bacterial-feeding nematodes consume N in the form of proteins and other N-containing compounds in bacterial tissues and release excess N in the form of ammonium, which is readily available for plant use. Indirectly, nematodes enhance decomposition and nutrient cycling by grazing and rejuvenating old, inactive bacterial and fungal colonies, and by spreading bacteria and fungi to newly available organic residues. In the absence of grazers, such as nematodes and protozoa, nutrients can remain immobilized and unavailable for plant uptake in bacterial and fungal biomass.

Bacterial-feeding nematodes are the most abundant nematode group in agricultural soils. Their abundance closely follows that of bacterial populations, which tend to increase when soil disturbances, such as tillage, increase the availability of readily-decomposable organic matter. Nitrogen mineralization in the soil occurs at a higher rate when bacterial-feeding nematodes are present than when they are absent. The contribution of bacterial-feeding nematodes to soil N supply depends, in part, on the quality and quantity of soil organic matter fueling the system. Net N mineralization from decomposing organic residues takes place when the carbon:nitrogen (C:N) ratio of organic residue is below 20 (that is, 20 parts C to 1 part N). When the C:N ratio is greater than 30, the rate of mineralization decreases because microbes compete for N to meet their nutritional requirements. In this situation, N is immobilized in the microbial biomass. Incorporation of manure, compost, and cover crops with intermediate C:N ratios (ranging from 10 to 18) may stimulate bacterial growth and the abundance of bacterial-feeding nematodes, and increase soil N availability to plants. 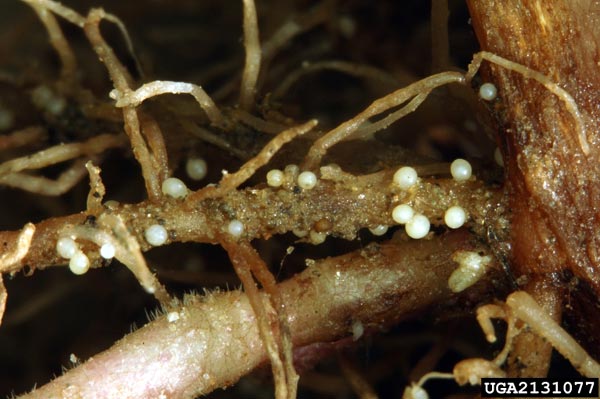 Figure 3. White potato cyst nematode, Globodera pallida (Stone) Behrens, on plant roots. Cyst nematode females attach to root systems with their mouthparts to feed, and then their bodies swell into egg-filled cysts that can be visible to the naked eye. Figure credit: Bonsak Hammeraas, Bioforsk—Norwegian Institute for Agricultural and Environmental Research, Bugwood.org.

The proportions of the different feeding groups in the soil nematode community vary between systems and seasons, and they are influenced by a variety of factors, including crop and soil management practices (Freckman and Ettema, 1993) and the presence and abundance of natural enemies. Management practices like tillage, crop rotation, and the use of organic amendments influence the physical and biological characteristics of the soil that influence the abundance of nematodes. Fungal-feeding, predatory, and omnivorous nematodes are very sensitive to soil disturbances (Ferris et al., 2001), and agricultural systems with fewer physical and chemical disturbances, such as pastures, hay fields, and orchards, tend to support larger populations of these nematodes than more frequently disturbed systems like vegetable- and row-crop fields. On the other hand, tillage and incorporation of organic residues increase the proportion of some bacterial-feeding nematodes (Griffiths et al., 1994; Ferris et al., 2001; Nahar et al., 2006), often offsetting declines in the numbers of other feeding groups and increasing the total abundance of nematodes (Neher, 1999). The wide variety of natural enemies that feed on or infect nematodes—predatory nematodes, predatory microarthropods, and nematode-trapping fungi, for example—may have a considerable impact on nematodes in agricultural systems (Stirling, 1991).

Agricultural management may increase the abundance of soil nematodes, primarily through the increase in the abundance of bacterial-feeding nematodes associated with tillage and the incorporation of organic residues (Neher, 1999). Soil conditions in agricultural production systems can be improved by enhancing nutrient availability and providing habitat for beneficial soil organisms. Maintenance of large populations of bacterial-feeding nematodes with practices that promote N mineralization throughout the growing season may enhance crop productivity, but a surplus of mineral N is not desirable from the environmental point of view because of an increased risk of nitrate leaching. In an ideal production system, N supply would be synchronized with plant demand. On the other hand, cultural practices like tillage or cultivation may reduce the complexity of the soil food web. Thus, a decrease in the frequency and intensity of tillage may promote the conservation of predatory nematodes and contribute to improved farming system performance.