Insect-Parasitic Nematodes for the Management of Soil-Dwelling Insect Pests

Insects have many types of natural enemies. As with other organisms, insects can become infected with disease-causing organisms, called pathogens. Soil serves as a natural home and reservoir for many kinds of insect pathogens, including viruses, bacteria, protozoa, fungi, and nematodes. We can take advantage of these natural enemies of insects to help manage insect pests. The use of natural enemies to manage pests is called biological control.

Description: What Is a Nematode?

Nematodes are microscopic, whitish to transparent, unsegmented worms. They occupy almost every habitat on earth, both aquatic and terrestrial, and are among the most common multi-celled organisms. Nematodes are generally wormlike and cylindrical in shape, often tapering at the head and tail ends; they are sometimes called roundworms or eelworms. There are thousands of kinds of nematodes, each with their particular feeding behavior; for example, bacterial feeders, plant feeders, animal parasites, and insect parasites, to name a few. 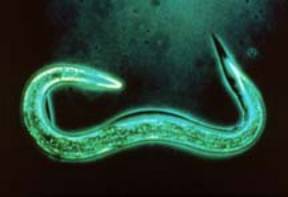 In conventional production systems, soil-inhabiting insect pests are managed by applying systemic pesticides to the soil or foliage. Instead, soil insect pests can be managed by using cultural practices, for example, tillage and crop rotation. Biological control is another important way to manage soil-inhabiting insect pests, especially in organic systems. A group of organisms that can be used as biological control agents for soil pests in organic systems are insect-parasitic nematodes. These nematodes occur naturally in soil and possess a durable, motile infective stage that can actively seek out and infect a broad range of insects, but they do not infect birds or mammals. Because of these attributes, as well as their ease of mass production and exemption from US EPA registration, a number of commercial enterprises produce these nematodes as biological "insecticides."

Insect-parasitic nematodes carry within their bodies insect-killing bacteria. Because of this nematode/bacteria association, these nematodes are also termed entomopathogenic. The relationship between the nematodes and bacteria is a true obligate mutualism because the bacterium needs the nematode to carry it into the insect body cavity. The nematode needs the bacterium to create conditions in the insect suitable for nematode reproduction and growth, and as food. The bacteria are safe to vertebrates and only occur in association with these nematodes and in infected insects. The bacteria have not been detected living freely in soil. The bacteria produce pigments, so that insects infected with nematodes turn a brick-red, maroon, orange, ochre, tan, greenish, or brown, depending on the nematode and bacterial species. Nematode-infected insect cadavers do not smell putrid, and the insect cuticle stays intact until very late in the infection process.

The infective third-stage juvenile (sometimes referred to as dauer or IJ) nematode is the only life stage that exists outside of the host insect. The IJ is the stage that is purchased in commercial products. The IJ is non-feeding and is more resistant than other stages to environmental conditions. The IJ carries the bacteria in its intestinal tract. Upon locating a suitable insect host, the IJ enters through natural openings (anus, spiracles, mouth) of the insect and penetrates into the insect body cavity. There it releases its bacteria, which multiply and kill the host insect.

The nematodes develop into adults inside the dead insect. They feed on bacterial cells and tissues in the insect cadaver and reproduce. As resources of the insect are depleted and crowding occurs in the insect cadaver, IJ are produced. The IJ emerge from the cadaver to search for new insect hosts in the soil. The reproductive potential of insect-parasitic nematodes is very high. Thousands of nematodes can be produced from a single infected insect. The time from infection of the insect until infective juveniles emerge takes about 2 weeks in the laboratory. Under natural conditions the recycling time may vary depending on environmental conditions and the susceptibility of the host insect. 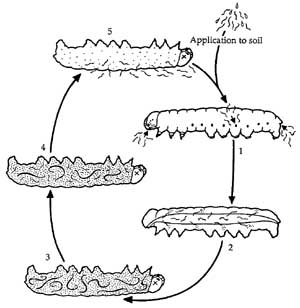 Some nematodes that are commercially available are Steinernema carpocapsae, S. feltiae, S. riobrave, Heterorhabditis bacteriophora, H. marelatus, and H. megidis. These nematodes are most commonly used for management of soil insect pests in high value crops, for example, in turf, plant nurseries, tree fruit orchards and groves, cranberries, and mushrooms. Because nematodes are living organisms, their successful use is influenced by environmental conditions. Nematodes need adequate soil moisture, temperatures within the tolerance levels for the specific nematode, and protection from UV radiation (direct sunlight) during application.

These nematodes, like most soil nematodes, are actually semi-aquatic. Their natural home is in the water film that surrounds soil particles. The IJ are sensitive to destruction by bright sunlight and desiccation if they are sprayed on plant foliage unless they are especially formulated for that use. The most common usage is in soil, although in some instances they have been successfully applied above-ground to control insects that tunnel or mine plant tissue.

Nematodes are formulated as suspensions in liquid, on sponge, in gels, in moist vermiculite, or as semi-dry granules. The main application approach for use is as an aqueous suspension at a typical rate of 2.5 billion/hectare (1 million/acre), but this rate varies depending on the crop. They can be applied with conventional agricultural application equipment, but nozzle filters or screens smaller than 50 mesh will clog and it is best to remove screens in nozzles when applying nematodes with a back-pack sprayer or spray rig. Care should be taken when using hydraulic pumps that have high internal pressure and high shear force as these will shred the nematodes.

Nematodes tend to settle in the tank, so agitation must be provided for uniform application. Nematodes can be killed by excessive tank agitation through sparging (recirculation of a portion of spray mix) or excessive mechanical stirring that is used to keep the nematodes in suspension. Pump pressure and temperature above 300 pounds per square inch and 85°F, respectively, will kill nematodes.

Successful application of nematodes is influenced by spray volume. Most nematode labels suggest volumes of two to six gallons of spray per 1000 square feet (87-260 gallons per acre). This is achievable for many boom sprayers and lawn shower nozzle sprayers that are equipped with sufficiently large nozzles. When lower spray volumes are used, pre- and post-application irrigation can be adjusted to counteract the problem of low volume sprays and to assist in moving the nematodes to the soil and off exposed surfaces.

Nematodes can also be applied with irrigation. However, some irrigation systems, especially low volume trickle systems, may not move water fast enough to keep nematodes suspended. When in doubt, check periodically by taking a sample at the emitters to determine if live nematodes are being moved through the system. 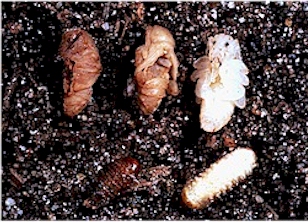 To date, levels of control achieved by the application of nematodes has been mixed, with some great successes, mostly in controlled systems (e.g. nursery containers, mushroom houses), and some failures. The efficacy of nematodes is affected by environmental conditions; they need adequate but not excessive moisture, temperatures within the tolerance levels for the particular nematode, and protection from UV radiation during application (apply early in morning or in the evening).

Most failures in efficacy of field applications are related to a poor match between the nematode species and target insect pest. Species of nematodes vary in their host range and in their host-finding behavior. Some nematodes, for example, Steinernema glaseri and Heterorhabditis bacteriophora, are very active in the soil and search a relatively large area for a host insect, whereas the widely available nematode, Steinernema carpocapsae, is relatively sedentary and tend to sit and wait for a host insect to pass by in close proximity. Steinernema carpocapsae is classified as an ambusher and is most suitable for mobile pests, for example armyworms and cutworms. Steinernema riobrave moves well through the soil. It was originally found in the Rio Grande Valley of Texas, is adapted to warm soils and is more tolerant to tilled soils than are some other nematode species. Heterorhabditis bacteriophora is highly parasitic on some lepidopteran and coleopteran larvae. It is classified as a cruiser and is effective against sedentary insect hosts, for example, white grubs. Heterorhabditis megidis is a parasite of black vine weevil and various other soil insects.

A nematode that is an active searcher (cruiser) will be more effective at finding a sedentary insect host, for example white grubs, than will a sedentary nematode (ambusher). The relatively sedentary nematodes are effective at infecting active insect hosts, such as cutworms or mole crickets. Some known appropriate pathogen-host targets are S. glaseri against the Japanese beetle; S. scapterisci against mole crickets; S. riobrave against cutworms and other noctuid larvae, pupae and citrus weevils; and S. feltiae against sawfly larvae and fungus gnat larvae.

As with any purchased natural enemy, quality of the product can affect efficacy. Quality of the product can be affected by batch, shipping, storage, and application conditions. Nematodes are living organisms and are subject to destruction by excessive cold or heat, and lack of moisture or oxygen. A small sample of the mixed product should be checked with a hand lens or magnifying glass to observe living, moving nematodes. Nematodes that are very straight and motionless may be dead, and therefore, ineffective. 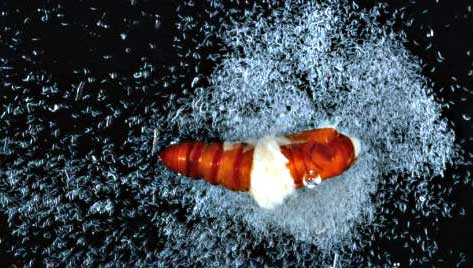