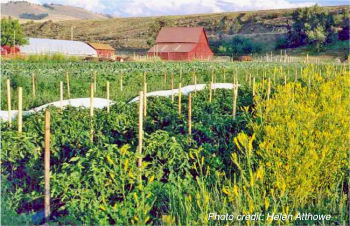 Years in organic management: Biodesign began in 1993 and was certified organic with the Montana Department of Agriculture Organic Certification Program until 2008, when the farm joined with other small, local organic producers to form the Western Montana Sustainable Grower's Union. The farm was sold in 2010.

Climate and soils: Semiarid (13 to 16 inches of annual precipitation) with a frost-free growing season of 100 to 115 days. Average last frost is 30 May, and average first frost is 10 September. Spring is the wettest period of the year, with about 25% of annual precipitation falling in May and June. Summer temperatures reach the high 90s, and winter lows are regularly below zero. Soils are classified as capability class VI by the USDA Natural Resources Conservation Service and rated as "poor" for agricultural use (Fig. 2: Farm Fields Map).

Rather than treating specific crops, problems, or pests, Biodesign focused on supporting natural nutrient and biological control cycles and on managing ecological relationships.

Biodesign's goal was to build and manage habitat for biological control organisms (e.g., insect predators and parasites, birds, bats, soil and foliar microorganisms) and to apply insecticides only when a pest was not sufficiently controlled by the system. Pests were sprayed only when absolutely necessary. The insect pest management system included both systemic practices (Insect Table 1) and pest-specific strategies (Insect Table 2):

Crop yield and quality losses to insects decreased from 1993 through 2010, according to Helen. This observation is supported by reduced insecticide use (Insect Fig. 1), crop monitoring records (1993–2010), and on-farm research (2006). Farm records document good yields, less than 3% average crop damage across all crops (Insect Fig. 2 and Insect Fig. 5), and high predator/parasite populations (Insect Fig. 3 and Insect Fig. 4). Aphids on peppers and cabbageworms on brassicas were the main insect pests at Biodesign.

Diseases, primarily bacterial speck of tomato (Pseudomonas syringae pv. tomato) and cucumber mosaic virus of pepper (Bromoviridae:Cucumovirus) were never highly damaging due in part to the dry climate. However, losses did occur. Over time, losses declined, especially those caused by bacterial speck as documented by crop quality monitoring records (1993–2010), possibly due to Biodesign Farm's design and soil- and habitat-building practices. Cucumber mosaic virus was observed at low levels on peppers in the early 2000s, but did not become more severe over time or affect crop yield.