Note that the best plants to use as trap crops for the Brown Marmarated Stink Bug (BMSB) have not been determined to date, but sunflowers, squash, zucchini, and pumpkin appear to have strong merit. Hollyhocks are also used by all stages of the first generation of BMSB, are easy to grow, and may have some merit for use by homeowners to attract and kill BMSB as they leave dwellings where they have overwintered. Growers can follow the Organic Management of Brown Marmorated Stink Bugwebsite for up-to-date research and other information on BMSB, including trap crops.

Stink bugs (Pentatomidae) and leaffooted bugs (Coreidae) are currently an overarching issue in agriculture. Stink bugs—mainly the brown, the dusky, the green and the southern green—and the leaffooted bugs have become important primary pests of most fruit, nut, vegetable, and seed crops (Fig. 1). Additional major and minor species also occur throughout the U.S. Another non-native, damaging species, the brown marmarated stink bug (BMSB), is now spreading across the U.S. Stink bugs are extremely polyphagous—they feed on a wide range of plants. They can move over large distances and use a sequence of plants/crops as their populations increase throughout the year. Stink bug seasonal abundance and distribution are driven by food quality and availability. These insects are tolerant of many insecticides and are difficult to suppress. Interestingly, stink bugs also include beneficial preators—these beneficial insects can be distinguished by examining the mouthparts (Fig. 2).

For the reasons discussed above, stink bugs are difficult to manage—especially in organic systems. Initial research suggests that trap cropping may be a useful strategy available to organic producers for managing these troublesome pests, but continued efforts are needed to identify appropriate trap crops and management to use for different stink bug species combinations and crops in different regions of the U.S. This article presents background information and summarizes research results for this potential management tactic. An original paper on stink bug trap cropping by Mizell et al. (2008) should be read by anyone contemplating using these trap crops. 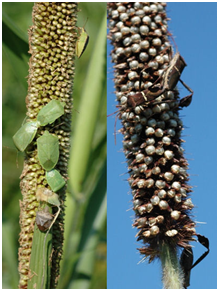 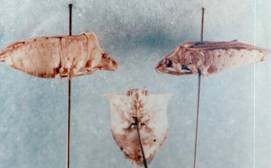 Figure 2. To distinguish beneficial predatory stink bugs from plant-feeding pests, examine the way the mouthparts attach to the head. Plant feeder mouthparts are attached tightly without a space (left), while the mouthparts of beneficial species (right) have a space between the head and the mouthparts. Photo credit: R. F. Mizell, III, University of Florida.

Stink bugs use a sequence of crops through the season. An intercropping or a companion planting approach will not work for stink bugs, in all instances. Such spatial configurations will provide a pathway for the stinkbugs to spread into the cash crop interior, which is to be avoided. Stink bugs exhibit a very strong "edge effect" behavior when moving through the landscape that results in damage accumulation at crop borders and an increase in damage over time as the stink bugs disperse into the crop's interior. In some situations, stink bugs only damage the border rows and those can be used as the trap crop. Note that BMSBs also manifest this behavior, as evidenced by the border patterns of green non-senescing plants (plants which stay in a juvenile state) seen in soybean fields in fall as a result of BMSB feeding.

Stink bugs respond strongly to vegetation borders and do not like to cross open areas where they are more exposed to natural enemies (they have a short "perceptual range"). Therefore, their movement is usually along the edges of crops, fence rows, wind breaks, and other natural structures.

Producers may want to use an aerial map or photograph (e.g., Google Earth) to analyze and predict how stink bugs would most likely move through crop landscapes and place trap crops in these "transition" pathways accordingly. Organic growers may want to permanently assign such critical areas to trap crops, as well as maintain close attention to the relative location and timing of plots with stink bug pests surrounding cash crops. Avoid planting "nurse" crops that will attract and support stink bugs "before in time" or "next to in space" cash crops that are highly susceptible to stink bugs.

Trap cropping is the strategic placement of a small area of highly competitive plant hosts adjacent to cash crops. The trap crop should have minimum side effects and management difficulties as well as be suitable for combination with other tactics to attract stink bugs. Installing the plantings should be cost effective and applicable for each growing season. Such a bio-based trap cropping system has been developed to manage stink bug pests for any planting season from spring to fall in the southeastern states, but the concepts are applicable over a larger area of the U.S.

Small plots are established adjacent to the cash crop using standard cultural practices (Fig. 3). Mixtures of host species and continuous management are required to ensure optimum food availability in the trap crop to out-compete the cash crop for stink bug feeding. Optimum quality food for stink bugs often means plants with fruiting bodies in the milk or dough stage. However, stink bugs have hundreds of different hosts with other plant parts that they feed on which may vary by stink bug life stage and species. To be effective, trap crops must intercept the stink bugs before they move into the cash crop. 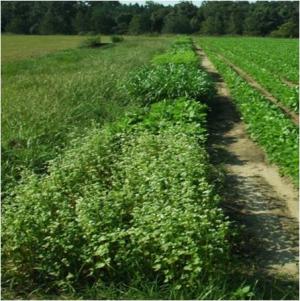 Logistics – Some Helpful Information That Will Increase Trap Crop Efficacy

Triticale with crimson clover and vetch, sorghum, millet, buckwheat, and sunflower are the main species recommended to attract the native stink bug species found in the Southeastern U.S. Okra and field peas can also be used (summary below). Early spring soil temperatures limit growth of some plant species; however, triticale, crimson clover, and vetches (common and hairy) can be planted in fall for use as early spring trap crops. Small-acreage organic growers, and homeowners may plant trap crops in large containers for portability and plants could be started in a greenhouse before the field season commences. Millet, sorghum, and buckwheat may be ratooned—mowed down to ~0.5m to induce repeat shoot production and heading—to extends the life of the trap crops. Similarly, by planting multiple sorghum cultivars with different maturity dates, the life of a trap crop can be extended (Fig. 4). These plant species also augment parasites, predators, and pollinators.

Summary of Seasonal Trap Crops and Tactics Recommended in the Southeast 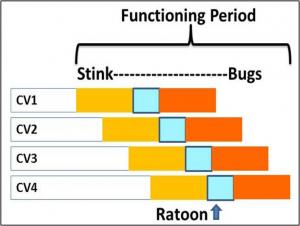 The physical appearance and height of the plants can be important and their efficacy as a barrier can be improved by using pole or climbing species or cultivars on a vertical lattice of wire fencing on posts placed in the ground or in portable containers. The default (lack of knowledge) approach relative to placement would be to ring the entire cash crop with the trap crop. Alternatively, to reduce the amount of space and expense required for the trap crop, one may exploit stink bug behavior and use the "source-sink" approach to determine where to strategically place smaller trap crop plots in the most probable pathways that stink bugs will use to arrive at the cash crop from their previous hosts.

Additional Tactics to Include

Trap crop efficacy may be further enhanced by the addition of visual and semiochemical attractants. The yellow pyramid trap baited with the species-specific attractant chemical(s) will attract and capture stink bugs and attract natural enemies. Simple 5–7 gallon plant pots or 3 x 36 inch mailing tubes painted safety yellow # K7744 will also attract both stink bugs and natural enemies to the trap crops. Stink bugs may be consumed by birds and other animals when exposed off the plant. Specific insect naturul enemies include hymenopterous egg parasitoids and parasitic flies (Tachinidae). The mortality exerted on the various stink bug species by these parasitoids is not well documented but it is known that tachinid flies do respond to the semiochemicals released by stink bugs. Thus, the addition of semiochemicals to trap crops may increase natural enemy populations there, bringing them into more frequent contact with stink bugs. However, whether this increases overall stink bug mortality  has not been documented.

Once the stink bugs arrive in the trap crop, they may be removed either by hand or with an insecticide. Methods available include mechanical removal—by hand picking, sweep net, vacuum, or a blower and catchment container (Fig. 5)—or application of an approved insecticide.

Note that, although OMRI and WSDA lists are good places to identify potentially useful products, all products that you use must be approved by your certifier. For more information on how to determine whether a pest control product can be used on your farm, see the related article, Can I Use This Input On My Organic Farm?

Figure 5. Depiction of a catch frame of PVC covered with netting to be held behind trap crop plants and used with a leafblower or backpack sprayer to remove stink bugs from trap crops. Dimensions should be large enough to handle easily but do the job (122 x 213 cm). Bugs can be removed from the bottom and destroyed, while natural enemies can be released unharmed. Figure credit: R. F. Mizell, III, University of Florida.