This article examines the biology and management of cucumber beetles within organic farming systems. 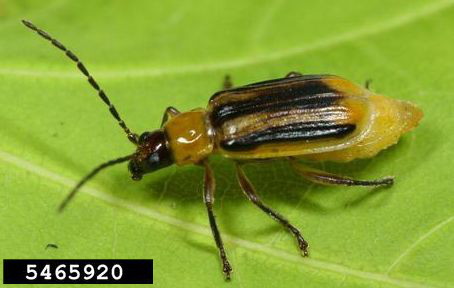 Figure 2. The western corn rootworm is similar in appearance to the striped cucumber beetle, and is often observed on squash crops, but is not a squash pest. Photo credit: Winston Beck, Iowa State University, Bugwood.org.

Cucumber beetle adults generally overwinter in residue from the previous years’ cucurbit crops, or nearby. The adults first move into cucurbits in the spring and then throughout the summer, feeding on stems, foliage and flowers.

Cucumber beetles damage cucurbit crops in at least three ways. First, their feeding directly stunts plants and, when flowers are eaten, can reduce fruit set (Fig. 2A). Second, cucumber beetles transmit bacterial wilt disease (Erwinia tracheiphila). More information on bacterial wilt can be found in this APSNet article on Bacterial Wilt and this Cornell Vegetable MD Online fact sheet on Cucumber Beetles, Corn Rootworms and Bacterial Wilt in Cucurbits. Third, adults scar the fruit reducing its marketability (Fig. 2B). It is primarily young cucurbit plants that are vulnerable to stunting and bacterial wilt disease, whereas damage to older plants primarily comes from fruit scarring. In fact, older plants can tolerate as much as 25% defoliation due to beetle feeding with no reduction in yield (Hoffmann et al., 2002, 2003).

A recent study searched for DNA of a cucumber beetle relative, the western corn rootworm, in the stomachs of predatory insects and spiders (Lundgren et al., 2009). The researchers believed that most of the beetle DNA that they recovered inside predators came from beetle eggs and larvae. This study found an incredible array of different predator species eating the beetles, including harvestmen (“daddy long legs”), ground and rove beetles, spiders of several kinds, and predatory mites. So, a bio-diverse community of predators may be important for biological control of cucumber beetles, rather than relying on any single predator species. Strategies to conserve predators are presented in the article, Farmscaping: Making Use of Nature’s Pest Management Services.

Organic-approved insecticides have not always been found to be effective (see below), so cultural controls may be the best option for many organic farmers. Cultural controls include crop rotation, the use of transplants rather than direct seeding, row covers, trap cropping, mulching for predator conservation, the use of reflective plastic mulches, choosing resistant varieties, and intercropping:

Cucumber beetles often overwinter near to the previous years’ cucurbit crop. So, one way to reduce pest problems the next year is to plant cucurbits as far away from last year’s crop as possible. Any barriers between last-year’s planting site and this year’s, such as hedgerows and out-buildings, may help slow beetle colonization of the new crop. However, the beetles are highly mobile and so crop rotation alone is unlikely to entirely control cucumber beetles.

Transplant rather than direct seed

Floating row covers provide the most reliable defense against cucumber beetles, when left in place until flowering begins (row covers must eventually be removed to allow bees and other pollinators to visit the flowers). Downsides of row covers include their high cost and the fact that they block access to the crop for weeding. Plastic or other mulches may be combined with floating row covers to reduce these weed problems, provided that the plastic mulch is removed from the field at the end of the growing season.

With good crop rotation practices, adult cucumber beetles will always be moving into a crop from somewhere else. In perimeter cropping the main cucurbit crop is ringed by plantings of a different, highly attractive cucurbit variety. Cucumber beetles generally aggregate at field edges regardless (Luna and Xue, 2009), and attractive trap crops may further accentuate this tendency. Recent research indicates that the Blue Hubbard and buttercup varieties of Cucurbita maxima, and zucchini (C. pepo), are particularly attractive to cucumber beetles (Adler and Hazzard, 2009). Then, approved insecticides can be applied to the trap crop only, reducing total insecticide use (Cavanagh et al., 2009). Lists of highly attractive cucurbits are presented in this ATTRA publication on Cucumber Beetles (fee may apply) , and a research project funded by the USDA's Sustainable Agriculture Research and Education program generated detailed recommendations for using this strategy in cucurbits.

Straw mulch can help reduce cucumber beetle problems in at least 3 different ways. First, mulch might directly slow beetle movement from one plant to another (Cranshaw, 1998; Olkowski, 2000). Second, the mulch provides refuge for wolf spiders and other predators from hot and dry conditions, helping predator conservation (Snyder and Wise, 2001; Williams and Wise, 2003). Third, the straw mulch is food for springtails and other insects that eat decaying plant material; these decomposers are important non-pest prey for spiders, helping to further build spider numbers (Halaj and Wise, 2002). It is important that straw mulch does not contain weed seeds and to make certain that it does not contain herbicide residues which can take years to fully break down.

Cucumber beetles are attracted to host plants by a chemical called cucurbitacin, which gives cucurbits their bitterness and likely is used as a defense against less-specialized herbivores (Deheer and Tallamy, 1991). The beetles absorb cucurbitacin into their bodies and use it to defend themselves against predators and pathogens (Gould and Massey, 1984; Tallamy et al., 1998). So, cucurbit varieties or species with lower cucurbitacin levels may be less attractive to cucumber beetles. Of course, market forces largely determine which cucurbits are planted, so variety selection will not be possible in many situations. Cucurbits are listed by their attractiveness to cucumber beetles in Cucumber Beetles: Organic and Biorational Integrated Pest Management .

A field-plot trial found that intercropping cucumbers with corn and broccoli reduced striped cucumber beetles substantially, compared to plots planted in a monoculture of cucumber (Bach, 1980). In this study intercropping also reduced the incidence of bacterial wilt disease. A recent study suggests that intercropping watermelons or musk melons with radish, nasturtium, tansy, buckwheat, cowpea or sweet clover has a similar benefit (Cline et al., 2008), suggesting that many different types of intercrops can help reduce cucumber beetle densities on cucurbits.

Field trials have reported somewhat inconsistent success using organic-approved insecticides to control cucumber beetles. To entirely block wilt transmission, insecticides would have to be applied repeatedly as new beetle colonists arrive, which could grow expensive. Treatment of plants just before they are transplanted into the field could help get the plants past the vulnerable early stages (Yao et al., 1996).

If you are trying to deal with an unanticipated pest problem, get approval from your USDA-accredited certifier before using a product that is not listed in your plan; doing otherwise may put your organic certification at risk. Note that, although OMRI and WSDA lists are good places to identify potentially useful products, all products that you use MUST be approved by your USDA-accredited certifier. For more information on how to determine whether a pest control product can be used on your farm, see the related eOrganic article, Can I Use This Input on My Organic Farm?

Kaolin clay is reported to act by making cucurbit crops unattractive to cucumber beetles and because it gums up the beetles’ antennae and otherwise irritates them.

Pyrethrum is a naturally occurring broad-spectrum insecticide extracted from the dried flower heads of African chrysanthemums. Pyrethrum will kill both pests and beneficials, and so should be used with caution. One approach to reduce harm to beneficials is to treat only the perimeter trap crop with pyrethrum, or only particular hotspots within the main crop.

Spinosad is a general feeding deterrent and toxin. Some effectiveness has been reported in controlling cucumber beetles, although label instructions should of course always be followed. Not all spinosad formulations are organic-approved, so care must be taken in selecting any chemical used.

No doubt reflecting just how difficult cucumber beetles can be to control, particularly within organic farming systems, a few other more unusual approaches have been attempted with a degree of success. Both of the approaches below provide the satisfaction of instantly removing cucumber beetles.

Flaming using standard weed flamers is one way to kill cucumber beetles, although clearly this would only be used on a trap crop and not the main crop. This approach may be less effective, though, with striped cucumber beetles, which often concentrate their feeding at the base of plants, and frequently head down into the soil when disturbed.

Sucking up beetles using a vacuum (e.g., D-vac suction sampler) or a reversed leaf-blower can be an effective way to remove adult beetles, in particular from trap crops where a limited area needs to be treated (Fig. 4). It would be challenging to suck any substantial fraction of beetles from a large area. Figure 4. A hapless undergraduate worker demonstrates the use of the D-vac bug vacuum, which can be used to suck cucumber beetles out of a cucurbit crop. Photo credit: Bill Snyder, Washington State University.

NOTE: Most of the controls described on these links ARE NOT ORGANIC APPROVED, although the details of local cucumber beetle biology are relevant to organic farming systems.