Spiny amaranth, sometimes called spiny pigweed, is a troublesome weed of vegetables, row crops, and pasture in warm climates. Native to the lowland tropics in the Americas, spiny amaranth has spread through tropical and subtropical latitudes around the world (Holm et al., 1991), has become a major weed of rice in the Philippines (Chauhan and Johnson, 2009), and is moving into temperate regions in the United States. Its widespread distribution and its sharp spines, which deter grazing and interfere with manual weeding and harvest, have earned spiny amaranth designation as the world's 15th worst agricultural weed (Holm et al., 1991).

Spiny amaranth is an erect, often bushy, much-branched summer annual, growing to heights of 2–5 feet (Fig. 1). Stems and leaves are smooth and hairless, sometimes shiny in appearance. Each leaf node along the stem bears a pair of rigid, sharp spines ~0.5 inch long (Fig. 2). 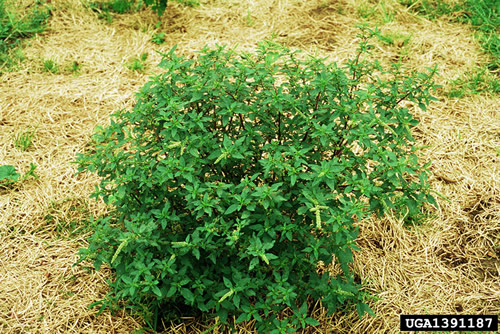 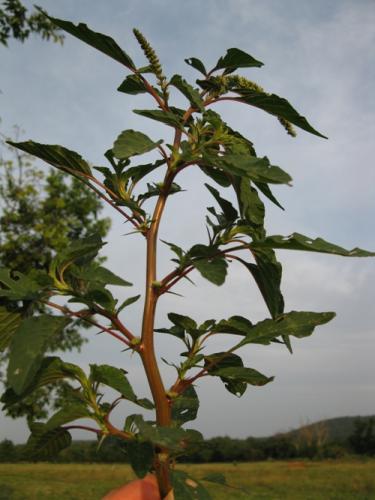 Leaf blades are egg-shaped to diamond-shaped, with the broader end closest to the stem, and 1–4 inches long by 0.5–2.5 inches wide. The petiole is approximately as long as the blade. Leaves may be variegated with a v-shaped watermark or area of lighter color (Fig. 3), although this is not a definitive characteristic of this species, since some other amaranths can show a similar watermark. 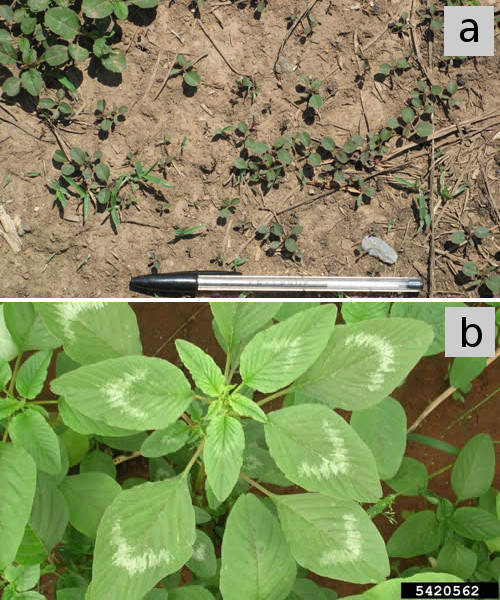 Like other pigweeds, spiny amaranth develops a strong taproot with a network of fibrous feeder roots. The taproot may or may not be distinctly reddish in color.

Male and female flowers are borne on different regions of the same plant—linear or branched terminal spikes with mostly male flowers, and globular axillary clusters of mostly female flowers (Bryson and DeFelice, 2009) (Fig. 4). 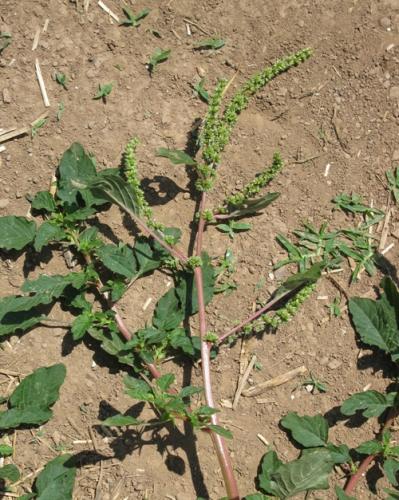 Flowering in spiny amaranth has been described as day-neutral (Holm et al., 1991), unlike other pigweeds, which flower in response to shortening days in late summer. Although the weed is most troublesome in warm or tropical regions, different ecotypes are known to exist, some of which flourish in temperate agricultural ecosystems.

The seeds of spiny amaranth are very small (~0.03 inch diameter), which is smaller than the seeds of some other pigweeds (Uva et al., 1997). Seeds may be carried by wind, water, or animal dung (Holm et al., 1991). Many farmers in Virginia and neighboring states report that spiny amaranth has arrived on their farms in livestock manure (personal communication).

Spiny amaranth seeds germinate mostly from the soil surface, and burial in the soil to a depth of just 0.25 inch can reduce germination considerably (Chauhan and Johnson, 2009). The seeds germinate in warm conditions (68–95 °F), and they respond strongly to diurnal temperature fluctuations and to light (Steckel et al, 2004; Chauhan and Johnson, 2009). Germination and emergence may take a few days longer for spiny amaranth than for some other amaranths (Sellers et al, 2003; Steckel et al., 2004).

Spiny amaranth appears to be a moderately strong competitor in U.S. croplands. It is most likely to cause yield losses in warmer parts of the South, and in shorter-statured crops that cannot shade out the weed. Because of its stiff, sharp spines, which can draw blood, spiny amaranth is a major nuisance in vegetables and other crops that are tended, weeded, and harvested manually. Grazing livestock are deterred by the spines, and the weed can become toxic when growing in soils high in available N. Unlike other pigweeds, which are highly palatable to livestock, spiny amaranth can become a significant weed in pasture or rangeland (Chauhan and Johnson, 2009) (Fig. 5).

In field and greenhouse studies on an organic (muck) soil of the Florida Everglades, low levels of available phosphorus limited the growth and yield of lettuce, but not of spiny amaranth (Santos et al., 1997; Shrefler et al, 1994). P fertilization improved the competitiveness of lettuce against the weed, and band application of the fertilizer reduced spiny amaranth impact on yield.

Organic vegetable and livestock producers who do not already have spiny amaranth on their farms will want to avoid importing this nuisance. Manure from off-farm sources should be hot composted at 140–160 °F (ideally 160 °F) for two weeks with several turnings to kill weed seeds, before field application.

If spiny amaranth is already present, or field scouting reveals that it has arrived, utilize the management strategies described for pigweeds. Because of its very small seed and seedling size, shallow depth of emergence, and germination response to temperature fluctuations, spiny amaranth may be especially susceptible to the following tactics: