Organic Farmers and the Disease Triangle

Disease on crops will only occur when something that can cause disease, meets a plant that can get the disease, and under the right conditions. This may sound trivial, but keeping these three cornerstones of disease in mind–more technically described as the confluence of a virulent pathogen, a susceptible host, and a conducive environment–is the key to rational control for an organic farmer. In 1960 this idea was illustrated by what has become an icon of plant pathology, the "disease triangle" (Stevens, 1960). 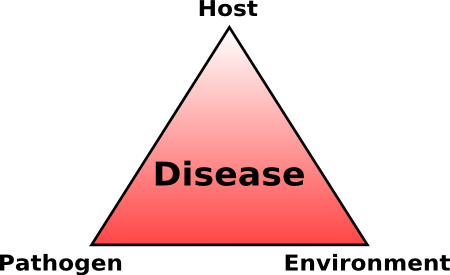 Avoid the virulent pathogen, for example through the use of disease-free seed. Eliminate the susceptible host, by using a resistant cultivar or a smart rotation. Make the environment unfavorable, say with well-drained raised beds or plant spacing that improves air circulation. And as an organic farmer, keeping the whole system in mind, one must use the idea of confluence of these three factors to one's advantage.

Actually, in some circumstances not all three elements of the disease triangle are in fact necessary for disease to occur. Environmental conditions can sometimes combine with the host plant to create a disease in the absence of a biological pathogen. For instance, injury due to cold, or fruit scorch in high sunlight, or growth stunting because of pollution are all types of diseases with no causal organism. These disorders are called "abiotic."

One requirement for some plant diseases that the triangle fails to account for is a vector. If some organism, typically an insect or other animal, is necessary for the pathogen to complete its life cycle, this vector absolutely determines whether or not disease will occur. Many viruses and viroids fall into this category. But even when the vector is not critical for infection, but a major means of disease spread (such as the elm bark beetle, which carries Dutch elm disease), the disease triangle is incomplete without this component. Some have suggested inserting it in the line connecting the host and pathogen.

Others have suggested including the human factor as another element of the triangle, but this may be a bit anthropocentric. We can facilitate disease by helping to bring the elements of the triangle together, but it happens without us in nature. Furthermore, humans are implicitly part of the host and its susceptibility through centuries of breeding, which in turn acts to alter the evolution of the pathogen. We constantly act to alter the environment as well. Adding an additional human element to the triangle is probably an unnecessary and redundant complication.

In any case, this is how plant disease happens: A susceptible host meets a virulent pathogen in a conducive environment, and we witness disease. How will it appear? There may be symptoms, and there may be signs. In the former case, there is a discernible change in the plant itself, say a yellowing or tissue death or undifferentiated growth. In the latter, the pathogen itself is visible, for instance as a conk appearing on a tree trunk or a bacterial mass oozing out of a stem.

Avoiding the perilous confluence of host, pathogen, and environment means being aware that each factor changes over time. It can be useful to think of a third dimension where disease triangles are layered as the growing season progresses.  An excellent illustration can be found in Francl (2001).

For instance, even if one has a cultivar that can be infected by a pathogen that occurs locally, it’s only necessary to keep them apart when the environment is favorable for disease. Thus, planting cantaloupe early in North Carolina so that spores of the pathogen, which blow in from the south, aren’t present until the crop is older and less vulnerable, can help prevent powdery mildew.

Some important factors related to the time element are the latent period and the infectious period. When a plant has been infected but has no symptoms, the disease is latent and will not be observable; but it is only a matter of time before disease erupts, followed for many pathogens by a period when additional inoculum (such as spores) are produced and may be dispersed to other hosts to start new infections. These infectious periods are important, because several may occur on a crop in one season, creating exponential growth in the disease. Each spore may produce a lesion that itself makes thousands of new spores, each of these creates a similar infection, and so on until there is no healthy tissue left to infect!

Thus we have an epidemic, and the study of the spread of disease is called epidemiology. This may be studied on scales from the field level over one season, such as early leaf spot of peanuts in a plot in North Carolina (Duffie, 2001).  Or it may be studied over a much larger geographical area and over a much longer period of time, as for beech-bark disease spreading from an isolated part of Maine in 1935 to throughout the Northeast and parts of Michigan and Tennessee by 2001 (Morin et al., 2007)

One of the best-known examples of a disastrous epidemic in which the elements of the disease triangle came together in a rare “perfect storm” is the Irish potato famine of 1845-1846 (see the “On the Ground” section below for the whole story). Less famous but equally history-changing epidemics include brown spot of rice in Bengal in 1943, which killed over two million people, or the coffee rust epidemic of 1869, which shifted the coffee industry from south Asia to South America and forced the British into a tea-drinking culture.

Working With the Disease Triangle

Two things are implicit in this disease-triangle based approach. They are true for anyone, but especially so for organic farmers emphasizing a systems approach.

First, prevention of disease before it gets a foothold is by far the easiest way to manage your crop. Therapy, or treatment after a pathogen has established itself and you can see its signs and symptoms, is expensive and often ineffective, even in conventional systems

Second, knowledge of the pathogens likely to be confronted at a particular farm, as well as the nuances of the land and weather there, allows a farmer to customize strategies that will derail that dreaded confluence of host, pathogen, and environment.

What strategies are available to manage disease organically? We can consider the options according to the time-frame in which the farmer must think about and apply them.

Medium-term strategies are pre-season activities such as cultivar choice, sanitation, and planting time and pattern

Short-term strategies can be determined and applied during the growing season, such as fungicide sprays, mulching and the timing of irrigation.

There are few examples of the confluence of host, pathogen, and environment as compelling as the Irish potato famine of 1845-46. It was the plant pathology equivalent of the “perfect storm.”  Although chemicals were not being used back then, the practices of potato culture were far from organic, a particular deviation being the lack of biodiversity.

The host was ubiquitous, because a skyrocketing population, poverty, and oppression created total dependency on the productive, nutritious potato among peasant farmers. Furthermore, the crop was very uniform genetically, all planting material derived from a few of the tubers imported from South America in the 1600s and propagated vegetatively. This provided little variation in resistance to the pathogen–everything was uniformly susceptible.

The pathogen, Phytophthora infestans, was present in cull piles and debris because of poor sanitation and little understanding of its biology. Low levels of the disease it causes, late blight, may have gone largely unnoticed in the background, even at the beginning of the epidemic.

The key to the disaster was the cool, wet weather that occurred at precisely the right time for infection and disease development in some areas. Unfortunately it recurred in 1846, so that fields that were spared in 1845, succumbed in 1846.

In the end, at least one million Irish died and two million emigrated to places like the U.S., Canada, and Australia to seek a new life.  Today we have a far better understanding of potato late blight and how to control it, but it remains one of the most important and costly diseases worldwide.  Now as in 1865, we continue to encounter that perfect confluence of host, pathogen, and environment.