Tomatoes are an important crop for small to mid-sized farmers selling directly to customers through farmers markets, Community Supported Agriculture (CSA), and restaurant sales. In this multi-year study (2014-2016), we evaluated 15 different tomato varieties for performance in high tunnel and open field management (marketable/unmarketable yield, average fruit weight, fruit number, and disease). Varieties were selected based on the potential for production in organic systems and were comprised of three different genetic backgrounds (heirloom, modern and 50% heirloom/50% modern crosses). We found management system (high tunnel vs. open field) to be the most important factor in determining both marketable yield and disease incidence. Although the high tunnel system improved variety performance overall, we observed differences in relative performance of some varieties between the two systems. We also found that causes of unmarketable fruit differed greatly between the high tunnel and open field, suggesting that breeding varieties to overcome specific issues in each system might boost marketable yield beyond the season extension benefit.

Tomatoes are very important for direct market vegetable growers, often serving as a key crop for farm income. However, growers in the North Central Region may face short growing seasons and high disease pressure. Additionally, many varieties may not be adapted for organic or low-input systems. As a result, growers are increasing their use of high tunnels for tomato production (Carey et al., 2009). Previous studies have demonstrated the benefits of high tunnel production, which include higher marketable yields, lower disease pressure, and increased fruit quality (O’Connell 2007, Rogers and Wszelaki 2012, Powell et al., 2014; Taber et al., 2015). However, many of these studies only evaluated a few tomato varieties at a time, often from the same market class. To add to the growing body of knowledge, researchers at the University of Wisconsin-Madison conducted organic tomato variety trials from 2014 to 2016 at the West Madison Agricultural Research Station (WMARS) near Madison, WI. The purpose of these trials was to screen varieties from different genetic backgrounds for production and quality in the North Central region, compare high tunnel and open field management, and compare revenue potential for different management systems and varieties.

Over the course of three years, ten tomato varieties were grown at the West Madison Agricultural Research Station (WMARS) (Table 1) in both a high tunnel and an open field system, under organic management. The varieties were provided by independent breeders and seed companies, and were assumed to have important traits of interest (good fruit quality, disease tolerance, etc.) for North Central region farmers. They were selected for inclusion based on screening trials, so that the study described here is based on ten varieties we know are adapted to the North Central Region. Yearly data from additional varieties not included in this trial across all three years is available in trial reports at https://seedtokitchen.horticulture.wisc.edu/trial-results.html.

Trials were grown on certified organic land at the West Madison Agricultural Research Station (WMARS). A high tunnel production area of 30 feet x 80 feet and an open field production area of 30 feet x 80 feet was used. Each variety was planted with two replications in a randomized complete block design in each management system. Tomatoes in the high tunnel were pruned to two main leaders and trellised using tomato clips and twine attached to cross beams. The open field tomatoes were trellised using T-posts and a basket weave method. Each system was planted with a cover crop and amended with compost and organic fertilizer (pelletized chicken manure or feather meal) each year to reach the recommended 150 pounds of nitrogen per acre. Plastic mulch and drip irrigation were used in both systems. Obligatory preventative measures at the research station were applied for late blight. This entailed applications of EF400, an organic approved fungicide in both systems every 10-14 days after late blight was reported in Dane County, where the research station is located. Note:Before using any pest control product in your organic farming system, read the label to be sure that the product is labeled for the crop and pest you intend to control, and make sure it is legal to use in the state, county, or other location where it will be applied, read and understand the safety precautions and application restrictions, and make sure that the brand name product is listed in your Organic System Plan and approved by your USDA-approved certifier. If you are trying to deal with an unanticipated pest problem, get approval from your certifier before using a product that is not listed in your plan—doing otherwise may put your certification at risk. Note that OMRI and WSDA lists are good places to identify potentially useful products, but all products that you use must be approved by your certifier. For more information on how to determine whether a pest control product can be used on your farm, see the article, Can I Use This Input On My Organic Farm?

These strategies were generalized to calculate revenue for the trial varieties (Table 2). The weekly marketable yield from the WMARS trials was multiplied by the price for each strategy to calculate the revenue potential for each variety and management strategy. For the purposes of revenue calculations, heirlooms and heirloom-by-heirloom F1s were considered heirlooms, and everything else was considered a modern slicer. Labor time for major tasks over the season was also recorded for each management system in 2017. The fixed costs of the high tunnel were not included in the revenue calculations. A high tunnel with W trusses (to support tomato trellising weight) costs approximately $7,000 (www.zimmermanshightunnels.com). Adding automated sides and additional bracing to allow a mobile structure brings this to approximately $10,000 (Zimmerman's, personal communication). Labor costs to build and install the high tunnel can as much as double this figure, if not provided by the farmers themselves. Estimates of fixed costs per year are approximately 0.49 (Sydorovych et al., 2013), which would be $1,323 on a 30x90 foot high tunnel.

Table 2. Generalized pricing strategies used in calculating revenue and earning potential per plant based on pricing strategy and management system, averaged over varieties in the trial

We saw a significant genotype by management interaction between systems, likely due to differing factors that contributed to unmarketable fruit between the two management systems. In the high tunnel, blossom end rot, rodent damage, and fruit and hornworm damage were common. In the open field, however, production suffered mostly from splitting, cracking, and various foliar diseases. Varieties that suffered from problems in one system or the other were the most likely to show differences in performance between the two systems. ‘Caiman’ showed a much higher proportion of unmarketable fruit in the field, where it was susceptible to cracking, and ‘Genuwine’ showed a much higher proportion of unmarketable fruit in the high tunnel because it was extremely susceptible to blossom end rot. We also saw a significant variety by year interaction primarily due to certain years being more conducive to the causes of unmarketability. Blossom end rot was fairly severe in the high tunnel in 2015 (with ‘Genuwine’ suffering dramatically from blossom end rot in that year), and 2016 was extremely wet during peak harvest season, leading to varieties that were susceptible to cracking like ‘Caiman” having a higher proportion of unmarketable fruit than expected.

Revenue potential by system and strategy is summarized in Table 3, and revenue potential per variety for a strategy of heirloom price premiums is shown in Figure 1D. Overall, marketable yield was the most important contributing factor for revenue regardless of pricing strategy. Premiums at the beginning and end of the season resulted in revenue very closely tracking marketable yield. The two heirlooms produced revenue equivalent to the lower yielding slicers for an heirloom price premium strategy, and ‘Genuwine’ had revenue equivalent to the higher yielding slicers. ‘Genuwine’ is an heirloom-heirloom F1 variety that has the appearance of an heirloom.

The high tunnel system provided more earning potential compared to the field setting for each price strategy. Table 3 gives the average revenue per plant for each strategy in each management system using the yield data from the WMARS trials. Potential revenue is also reported for an average sized high tunnel planted with the same spacing as our trials (~300 plants per 30’ x 90’ tunnel). With no price premiums, revenue in the field averaged $33/plant, and $63/plant in the high tunnel. Although pricing strategy did change the potential revenue of each market class, the most important factor was marketable yield, even when premiums were substantial. This assumes that each variety sells with the same likelihood. As a result, modern slicers were often the top earners despite price premiums for heirlooms. If modern slicers do not sell as well even with lower prices, then revenue for heirlooms may be higher. Premiums were chosen to represent the high end of what farmers were receiving, in order to illustrate the maximum possible differences among the market classes. 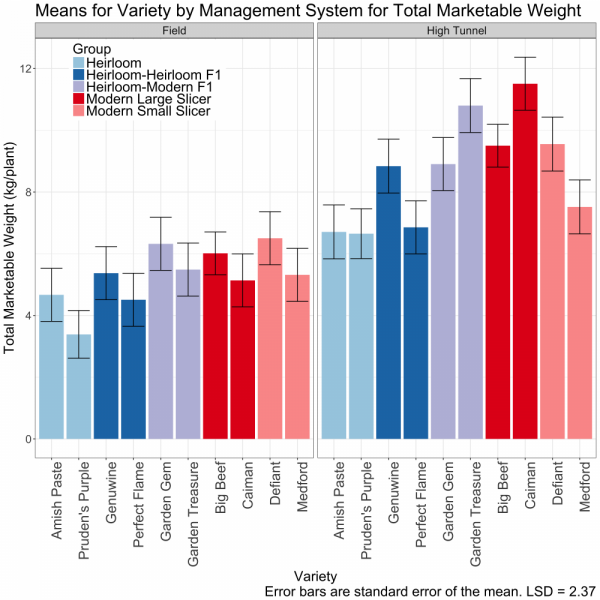 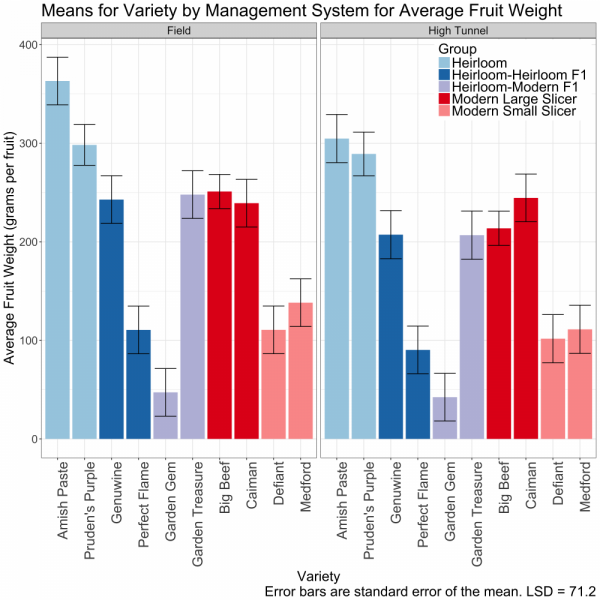 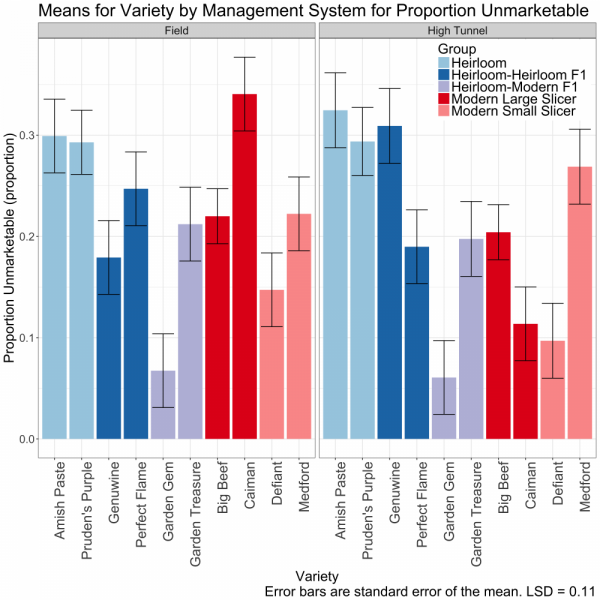 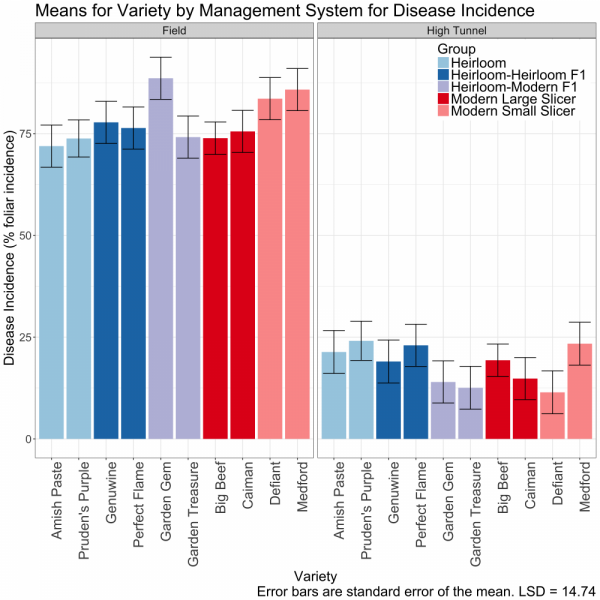 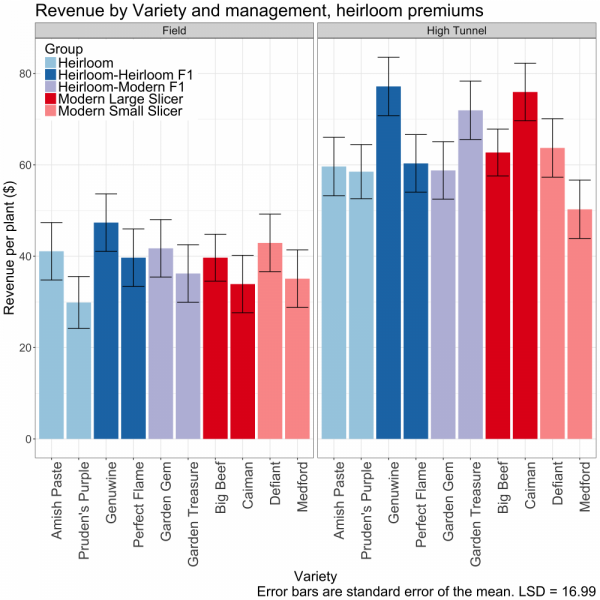 Figure 2. Revenue potential per plant for each management system by genetic group for pricing strategy two, with premiums for heirlooms and heirloom-heirloom F1 varieties. 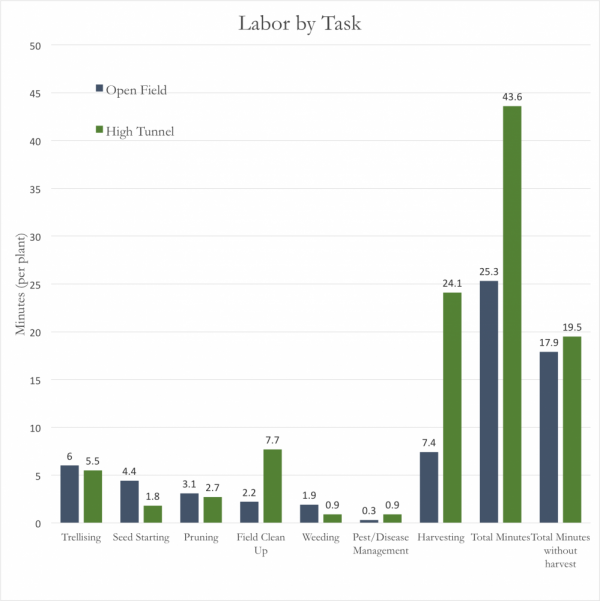 Figure 3. Labor in minutes per plant for each management system.

We would like to thank all the individuals and companies that provided seeds for the project; Janet Hedtcke and the staff at the West Madison Agricultural Research Station; students Thi Le, Terri Theisen, Natalie Cotter, Thomas Hickey, Keo Corak, Mariana Debernardini, Ilhulpachakatl Neubauer, Bradley Melinger, Laura Jacobson, Marissa Nix, Lucas Holiday, Sarah Lee, Molly Kreykes, Jamie Lovely and Maya Reese; Tricia Bross at Luna Circle Farm; and the farmers that participated in the pricing survey. This project was funded by the North Central Sustainable Agriculture Research and Education Program of the United States Department of Agriculture (USDA)(LNC14-357), and the Hatch Program of the USDA (WIS01775). T.L. Hodge was funded by a University of Wisconsin-Madison Science and Medicine Graduate Research Scholars Fellowship (Fall 2016-Spring 2017). Any opinions, findings, conclusions, or recommendations expressed in this publication are those of the author(s) and do not necessarily reflect the view of the U.S. Department of Agriculture.