In a collaboration between Gathering Together Farm (GTF) and Oregon State University (OSU), three high tunnels (Haygroves) were constructed side by side in January of 2003 on site at GTF. For the last three years, data has been collected in order to analyze high tunnel performance within the context of a diversified organic vegetable farm.

Gathering Together Farm is a 40 acre organic farm in the Willamette Valley that markets produce through a CSA, farmers markets, and direct sales to restaurants. When the high tunnels were constructed in 2003, GTF had 11 smaller greenhouses in use totaling 25,000 square feet. This report summarizes the experiences of the farmers over the three year trial.

History of High Tunnels at GTF

According to farmers John Eveland and Jolene Jebbia, the most significant attributes of the high tunnels are their large size and their capacity for excellent ventilation. For GTF, the most serious limitations to the length of their growing season are wet soil conditions that prevent mechanical bed preparation and planting in the spring; and pest and disease pressure resulting from cold, wet conditions in the fall.

Together, the three tunnels keep a total of 18,000 square feet dry and their size permits easy access for most farm implements. The large size of the tunnels also makes them more suitable for sprawling crops such as zucchini that had previously been impractical for greenhouse culture. By keeping the soil dry through the winter and thus available to be tilled at the farmer’s discretion, the tunnels allow for earlier plantings and more diverse rotations. Another factor influencing early spring plantings is the difficulty in managing weeds because wet conditions in the fields are unsuitable for mechanical cultivations. The crops grown in tunnels avoid this problem and allow GTF to maintain a cultivation schedule regardless of outside weather.

By having adjustable side walls, the farmers are able to manage the humidity and airflow within the tunnels thus reducing disease and pest pressure. The dry, well ventilated climate of the tunnels is often superior to conditions in the field and in other greenhouses. In previous years, late plantings of carrots were often decimated by the larvae of the carrot rust fly which thrive in wet soil. However, by growing carrots within the relatively dry tunnels, GTF has been able to extend its carrot harvest by one month into the late fall. Compared to other GTF greenhouses, John Evelend observed that the ventilation options in the high tunnels were superior for later plantings of tomatoes because the farmers were able to create cooler night temperatures and thereby produce hardier plants. 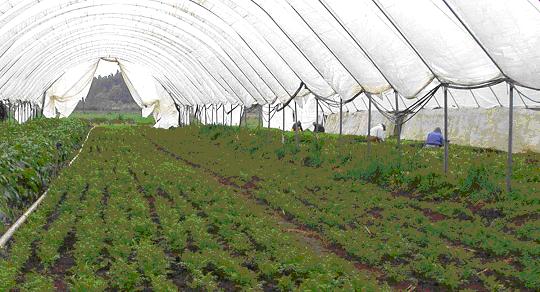 The size of the tunnels and their ventilation options do have a downside. The tunnels have proved less suitable than other greenhouses at GTF for the earliest plantings of tomatoes because they are less efficient at maintaining the relatively high temperatures required by that heat loving crop.

Due to the benefits associated with the tunnels, GTF now grows 7 crops in greenhouses that it previously had planted solely in the field: peppers, eggplants, basil, potatoes, head lettuce, zucchini and carrots. Compared to field culture, tunnel culture has extended the harvest window of these crops both early and late in the season.

This greatly expanded winter/early spring selection of vegetables has had a significant economic impact on GTF. Table 1 shows how much additional yield the tunnels made possible during 2004 and indicates a $29,000 contribution to the farm budget. GTF maintained 5 more restaurant contracts in the winter of 2004-2005 than in previous years and also significantly increased the variety in their winter CSA offerings.

Prior to 2003, the limited greenhouse space at GTF only allowed for a simple rotation of salad mix followed by either cucumbers or tomatoes. Now, the tunnels complement the GTF production strategy and ensure a significantly increased selection of fall and spring crops. In January, the smaller greenhouses are sown to salad mix while the tunnels are planted to early crops of salad greens, potatoes, and carrots throughout January and February. Following the harvest of the earliest salad mix, the first plantings of tomatoes and cucumbers go into the smaller greenhouses. Following the spring tunnels crops, late plantings of summer solanaceous crops perform better in the well ventilated tunnels than in the smaller greenhouses and last longer than solanaceous crops planted unprotected into the field.

The result of this well planned rotation is a significantly larger harvest occurring over many more weeks of the year. While the tunnels are a central component of this expanded rotation, the farmers at GTF would not recommend tunnels as a replacement for other greenhouses. Rather, they view them as a complementary tool which greatly increases the versatility of a season extension strategy for fresh market growers. For information on how other organic farmers use high tunnels in vegetable production systems, see eOrganic article High Tunnels on Organic Vegetable Farms: Case Studies