Participatory crop improvement projects (PCIPs) are integrated research and extension projects (a form of translational research, according to The Bronfenbrenner Center for Translational Research at Cornell University) that engage end users (e.g. farmers, agricultural professionals, chefs) with serious professional interests in the projected outcomes of the project as full partners/collaborators. All collaborators participate in setting project goals and plans of work, discussing results, and evaluating outcomes. The goal of this approach is to seamlessly integrate research and extension so that research goals are directed by the interests of the end users, and research findings are rapidly implemented. Extension personnel are critical to these projects as they recruit end users with a professional interest in the goals of the project and rapid implementation of its outcomes, coordinate activities that productively and efficiently engage end users, and ensure that the project delivers outcomes with positive, rapid, and meaningful impact.

Qualitative sensory evaluations used by sensory scientists identify consumer preferences. In the most common qualitative approach, consumers are recruited to identify their preference for one of several raw or prepared products. In Robbins (2003), consumers at a farmers market were asked to rank the flavor and texture of specialty potato cultivars in order of preference. In this paper, we describe an alternative approach—participatory culinary quality evaluations—in which end users (farmers, agricultural professionals, and chefs) with serious professional interest in the outcomes of the project evaluate cultivars for culinary quality.

This article describes culinary quality evaluation, yield, and crop quality assessment activities from two PCIPs, with an emphasis on the tasting activities, as they are most novel.

Experimental Design: On-farm trials were conducted on seven farms in the Willamette Valley, OR and Skagit Valley, WA. Fourteen seed pieces were planted one foot apart in each of two 15-foot plots on each farm.

Measurements: Marketable potatoes in each plot were weighed at harvest. Tubers were considered unmarketable if they were not of standard size.

Statistical Analysis: The between-row spacing was different on the seven farms, so yields could not be compared on a per-acre basis. Instead, yields on each farm were analyzed using a box plot, which displays the median and range in plot yields on each farm. 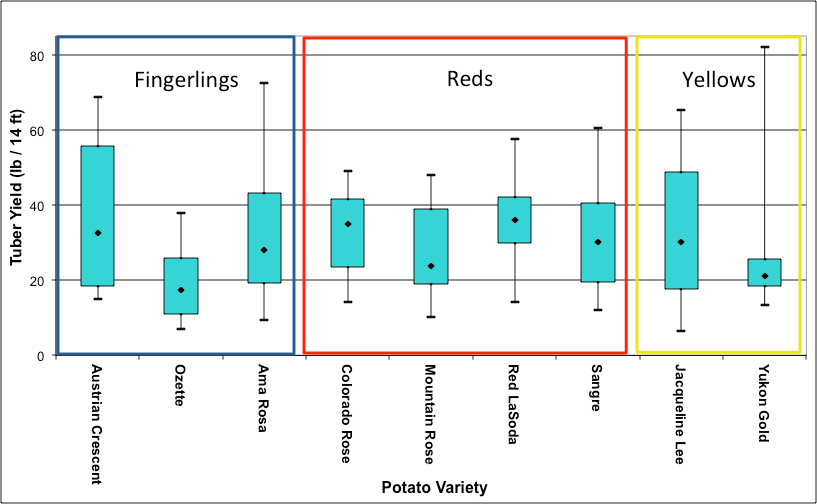 Figure 1. Box-plot representation of the yields of nine potato cultivars grown on seven organic farms in Oregon and Washington in 2007. (The dot represents the median yield across all farms. Fifty percent of the yields fall within the box. The "whiskers" represent the full range in yield.)

Table 2. Potato Cultivars and Breeding Lines Evaluated in a 2006 Potato Culinary Quality Evaluation at Gathering Together Farm in Philomath, Oregon.

Venue/Chef: The evaluation was conducted at the Gathering Together Farm restaurant in Philomath, OR. Samples were prepared by Chef Laurie Kennedy.

Sample Preparation: A representative tuber for each variety was displayed as raw (whole and halved) and steamed on a plain white plate and labeled with a random, numeric code (Fig. 2). Potatoes were sliced evenly into 1/8” pieces and steamed over boiling water for 10 minutes. One-half teaspoon of salt was added per cup of potatoes. 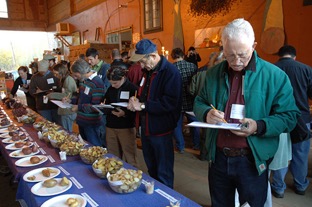 Table 3. Mean Ratings for Steamed Potatoes in a 2006 Culinary Quality Evaluation at Gathering Together Farm in Philomath, Oregon. (Means followed by the same letter within a column are not significantly different at P ≤ 0.05.)

The goals described by the project's collaborating farmers were met. 'Jacqueline Lee', a waxy yellow potato with documented resistance to foliar late blight, was shown to have similar culinary quality to the standard late blight-susceptible yellow variety 'Yukon Gold', while yielding comparably on collaborating farms.

'AmaRosa', a novel red flesh/red skin fingerling potato (evaluated as the numbered breeding line POR01PG22-1 during the project) was rated highly for flavor, texture and overall liking; it yielded comparably to other fingerlings and red potatoes when grown on collaborating farms. The Oregon State University Potato Program released 'AmaRosa' in 2010. Many growers and marketers (e.g. Klamath Basin Fresh Organics, Frieda's) are now growing and/or marketing these potatoes by name and they are available as seed from at least three sources.

Experimental Design: A mother-daughter (or mother-baby) trial design was used (Snapp, 2002). In this trialling strategy, a replicated (at least three plots of each variety) mother trial is planted on the research station and daughter trials consisting of one or two plots of each variety are planted on several commercial farms in the region. The mother trial for peppers was located at the Oregon State University Lewis Brown Horticultural Research Farm in Corvallis, Oregon. A randomized complete block design with three plots per variety was used. Plots were ten feet long with two rows of six plants spaced eighteen inches apart for a total of twelve plants in each plot. The three daughter farms (located near Philomath, Portland, and Sauvie Island, Oregon) each planted one plot of twelve plants per variety.

Measurements: All plots were evaluated for total and marketable yield and plant canopy. Plant canopy was rated using a 1–5 scale (Fig. 4) developed to rate the percentage of leaf cover over fruits, where 1 is minimal cover and 5 is complete coverage of fruit by the foliage. Fruits were considered unmarketable if they were cracked, sunburned, or not of standard size. Harvest was conducted weekly until frost at the end of October, at which point all fruit was harvested, including remaining green fruit. 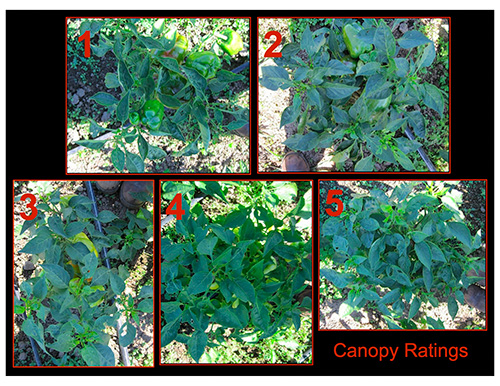 'Stocky Red Roaster' (SRR) had the largest and most upright canopy (Table 5). Total yield for 'Stocky Red Roaster was not statistically different from 'Gatherer's Gold' and 'Gypsy' (Table 5). However, SRR generated very few unmarketable fruit, so its marketable yield was 30% higher than 'Gatherer's Gold' and 35% higher than 'Gypsy', the standard red variety. SRR had the smallest fruit of the cultivars grown in this trial (Table 5). SRR generated few culls due to its large canopy and small fruit size, both of which reduced sunscald, the primary reason for culling.

Germplasm: The same nine bell and Italian roasting cultivars that were evaluated in the horticultural trial were evaluated in the culinary quality trial (Table 4 above). Cultivars were selected because they had performed well when grown by collaborating farmers or because they appeared in seed catalogs to have similar culinary qualities to ‘Gypsy’.

Sample Preparation: Raw samples were cut evenly into 1/8” strips. Sautéed samples were cut in the same manner then sautéed in a stainless steel pan over medium-high heat with a blended oil (70% canola/30% olive) for 5 minutes and sprinkled with sea salt after removal from heat. One tablespoon oil and ½ teaspoon salt was added to every cup of peppers. Roasted peppers were roasted whole at 215°F for 30 minutes, then peeled, seeded and cut into ½” pieces. A representative fruit for each cultivar was displayed raw (whole and halved). Pepper samples for tasting were displayed on plain white dinner plates and labeled with a random, numeric code (Fig. 5). 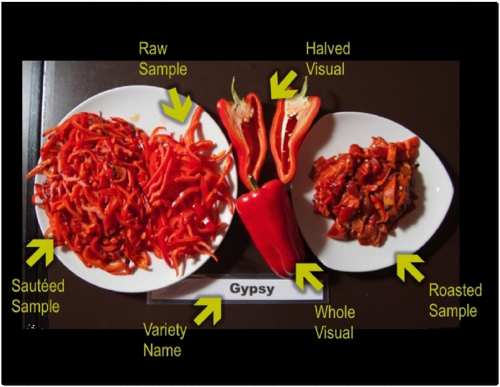 Figure 5. Culinary quality evaluation display for sweet peppers in Portland, Oregon. In the trial, the reverse side of the label was displayed with a numerical code rather than the variety name. Photo credit: Lane Selman, Oregon State University.

Evaluation Process: Individuals evaluated each cultivar for overall liking and appearance as well as its flavor when prepared raw, sautéed, and roasted. Evaluators used a 1—9 hedonic scale (1 = dislike extremely; 9 = like extremely). A comment box was included for additional remarks.

Table 6. Mean Ratings for Preference, Appearance, and Flavor of Sweet Peppers Grown in a Mother-Daughter Trial with Four Locations in Western Oregon in 2011. 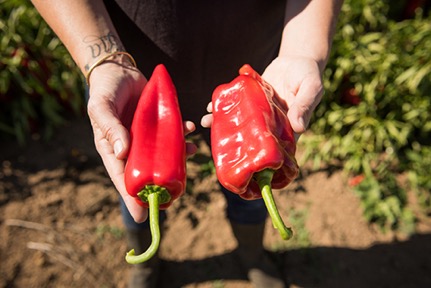 Collaborating farmers initiated the pepper project to find a sweet red open-pollinated roasting pepper to replace ‘Gypsy’ F1, as its seed had become increasingly difficult to source. The ‘Stocky Red Roaster’ pepper bred by collaborating breeder Frank Morton of Wild Garden Seed was identified as filling this niche. 'Stocky Red Roaster' was shown to be similar in yield to 'Gypsy' and significantly higher yielding than most other trial peppers. In addition, it was ‘liked’ and had a better appearance than 'Gypsy', and its flavor raw, sautéed and roasted was comparable to 'Gypsy'. Because of 'Stocky Red Roaster'’s high horticultural and culinary quality, collaborating farmers adopted 'Stocky Red Roaster' as a replacement for 'Gypsy.' In addition, it is now offered by more than ten seed companies and seed sales have increased by more than five hundred percent (personal communication, Frank Morton).

Two participatory crop-improvement projects (Ospud and NOVIC) sought to integrate culinary quality evaluation into their assessments of vegetable cultivars, as the customers of the projects’ collaborating farmers demanded high culinary quality. In both projects, culinary quality evaluations successfully differentiated varieties of high and low quality. This information, along with production data, including yield and disease resistance, identified cultivars and breeding lines of high market value that were also likely to perform well in the field. Because extension personnel successfully implemented the participatory research and extension (translational research) model, in which end users with strong professional interests in the outcomes of the project were integrated into project activities from goal-setting to evaluation, the results of these projects were immediately implemented by the end users and the projects resulted in strong and rapid impact.