A growing body of experimental evidence suggests that birds play important roles as natural enemies in agricultural ecosystems. For example, a study conducted in Europe demonstrated the important services provided by Great Tits (Parus major) in apple orchards. Researchers experimentally added nest boxes to some plots and saw an increase in fruit yield from 4.7 to 7.8 kg per tree. Increased yield was attributed to predation of caterpillars by Great Tits (Mols et al., 2002). A review paper by Bael et al. (2008) found that across 48 studies examined, birds reduced arthropods and plant damage. Here we focus on identification, diet, and management of Western Bluebirds and their role in farming. In addition to the insects this species consumes, we make suggestions for how to manage bluebirds to maximize their benefits while minimizing their risks. 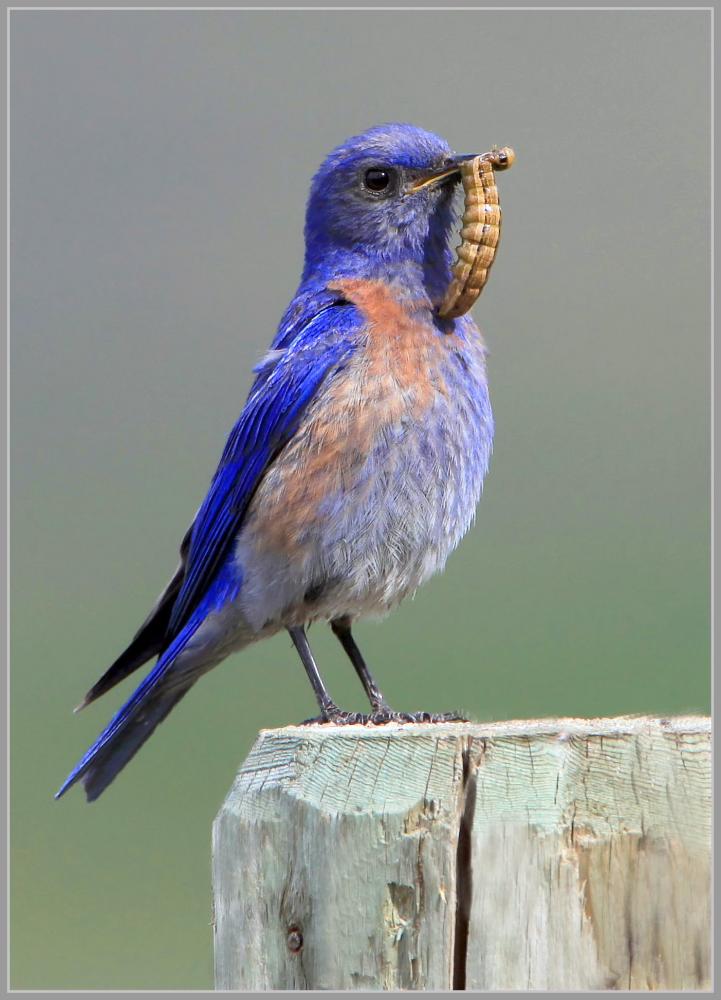 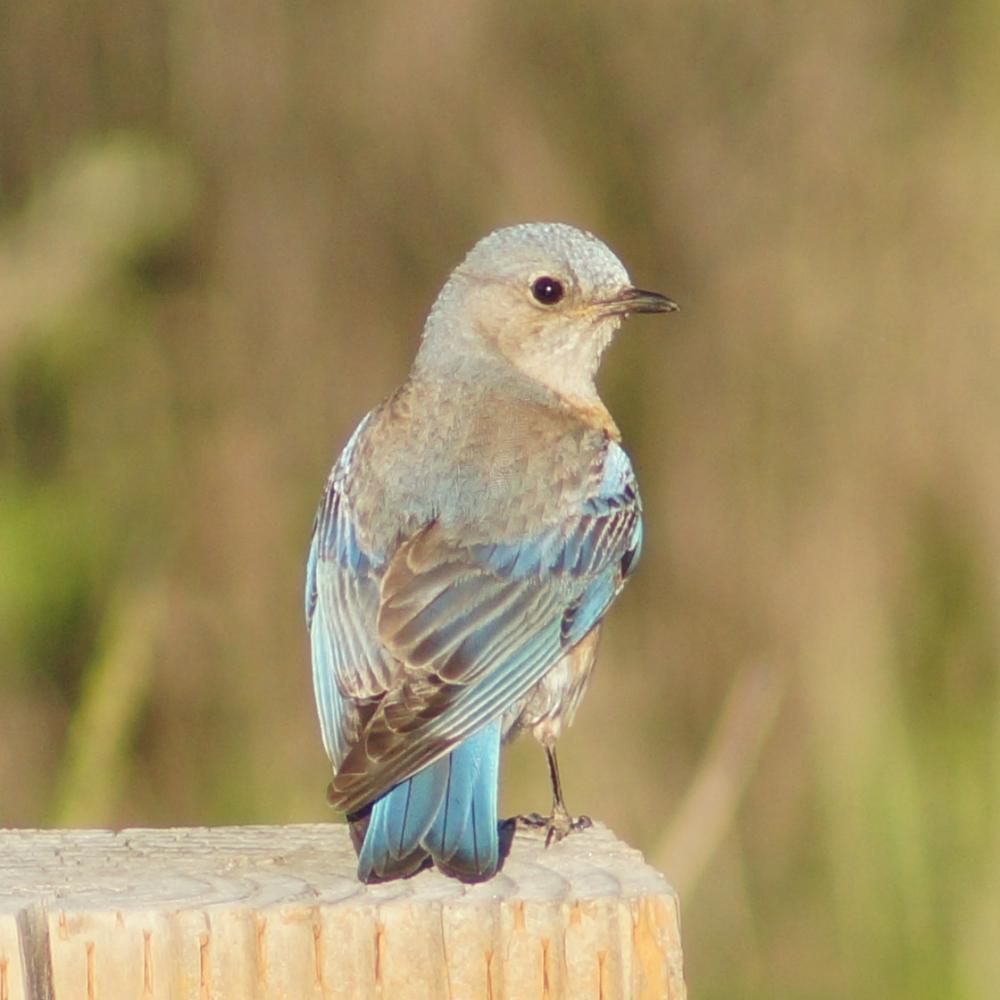 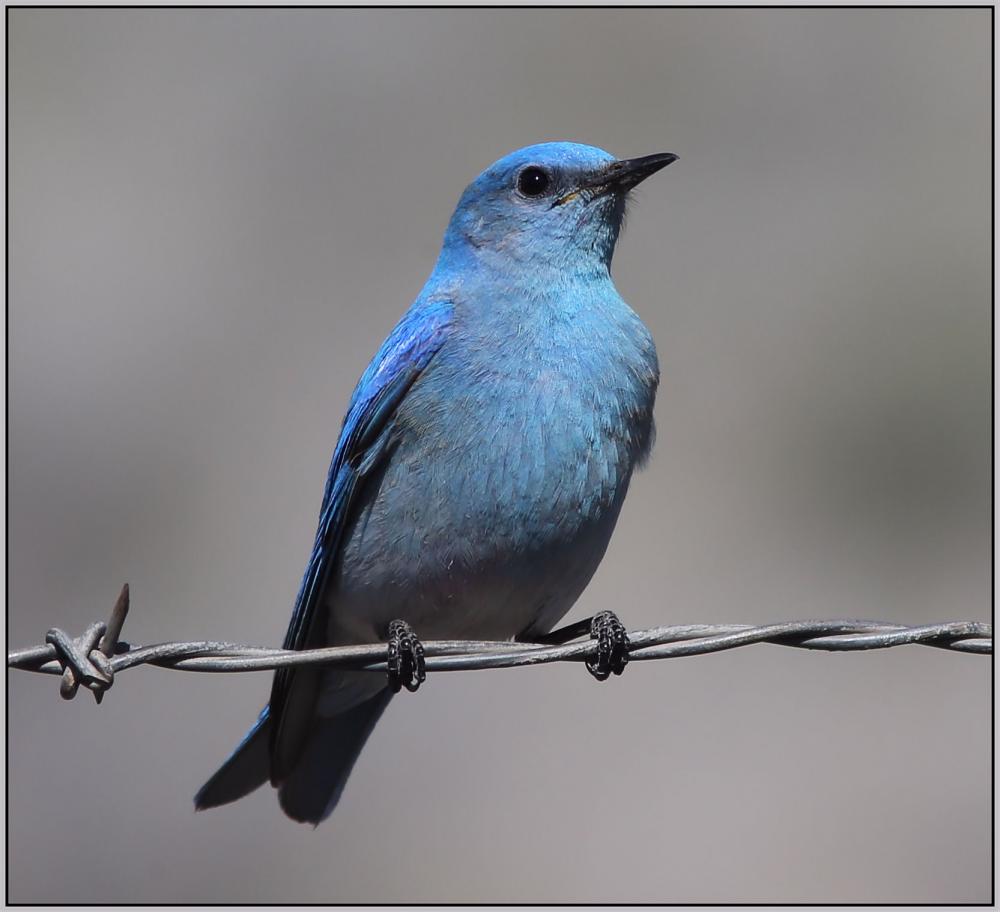 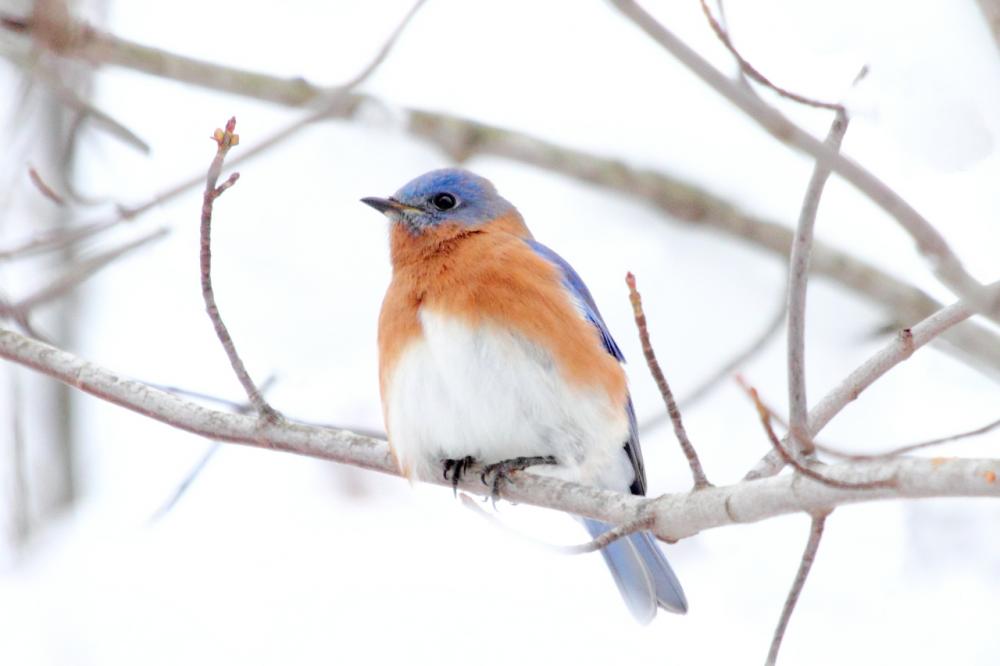 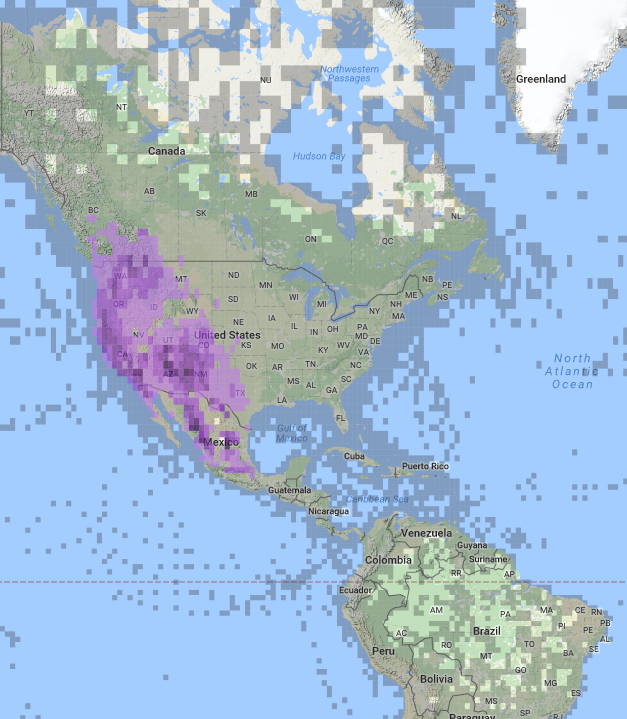 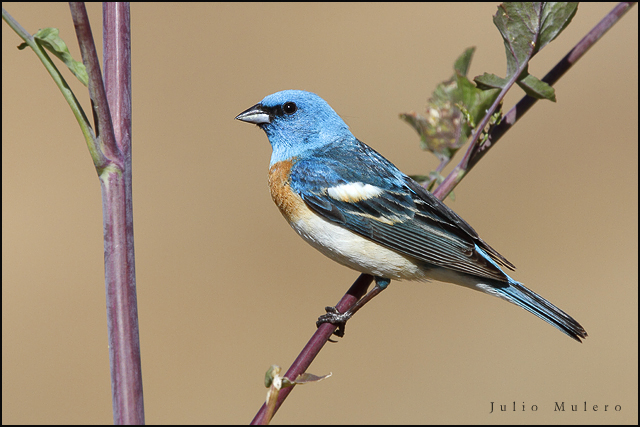 Western Bluebirds are primarily insectivorous ground gleaners (De Graaf et al., 1985) and often forage off of perches. Grasshoppers and beetles may be the most important portion of the nestling bluebird diet (Beal, 1915; Herlugson, 1982). A study conducted in South-central Washington examined the diet of bluebird adults and chicks in the breeding season. The nestling diet was composed of 37.5% Coleoptera (beetles), 29.2% Hymenoptera (wasps, bees), 17.5% Hemiptera (true bugs including aphids and scales), 9.4% Orthoptera (grasshoppers), 2.5% Lepidoptera (caterpillars), and 1.0% Arachnida (spiders). Actual biomass of each taxa in the nestling diet differed slightly than the number of individuals consumed: 58.27% Orthoptera, 22.85% Homoptera, 10.42% Coleoptera, 4.45% Arachnida, 3.80% Lepidoptera, and 0.21% Hymenoptera. The adult diet differed slightly from the nestling diet. The primary constituents of the adult diet were beetles (68.2%) and caterpillars (12.2%). After nestlings hatched, the diet shifted to Coleoptera (37.5%), Hymenoptera (29.2%), and Hemiptera (15.6%) (Herlugson, 1982). Beal (1915) additionally found flies and snails in gut contents. A study using a novel technique called molecular scatology tested the DNA in Western Bluebird feces and found that Aedes mosquitos comprised the highest portion of the diet (present in 49.5% of samples). Ectoparasitic bird blowfly (Protocalliphora sp.) DNA was in 7% of adult and 11% of nestling samples. Herbivorous insects from the Hemiptera and Lepidoptera orders comprised 56% of the prey items in bluebird diets. Predatory insects and parasitoid insects were less than 3% of the diet, suggesting that Western Bluebirds offer substantial ecosystem services and little risk of consuming beneficial predatory arthropods (Jedlicka et al., 2017).

Habitat during the Growing Season

Habitat usage varies throughout the range, but typical habitats are open coniferous and deciduous forests, forest edges, farms, and orchards. In the Willamette Valley, Western Bluebirds are common in open country with scattered trees and orchards, whereas in the eastern Cascades, they are more common in Douglas fir (Pseudotsuga menziesii) and open pine forests (Gilligan et al., 1994). In southern California, Western Bluebirds are primarily found in open oak woodlands and coniferous forests, and rarely in areas with large row crop fields (Garrett and Dunn, 1981).

Results from the North American Breeding Bird Survey indicate a 0.58% range-wide increase from 1966-2012 (Sauer et al., 2014); however, in the Northern Pacific Rainforest, there was a -1.25% decline from 1966-2012 (Sauer et al., 2014). Western Bluebirds are a State Monitor Species in Washington State (Washington Department of Fish and Wildlife; 2017) and are listed as Vulnerable in Oregon (Oregon Department of Fish and Wildlife, 2008). The most important likely contributors are loss of suitable nest sites and foraging areas due to logging, fire suppression, grazing, and urbanization (Herlugson, 1975; Brawn and Balda, 1988). The Western Bluebird is a secondary cavity nester, meaning it requires cavities excavated by other species, and relies on availability of snags, large living trees, or nest boxes (Guinan et al., 2008). Proposed measures include controlled and natural burning, prohibition of snag removal, and preservation of old, partially dead trees (Herlugson, 1975). An estimated 57% of the Washington Western Bluebird population lives on private land (Cassidy and Grue, 2000), suggesting the importance of private landowners providing suitable habitat for this species. Western Bluebirds compete with other native species like the Violet-green Swallow (Tachycineta thalassina) for nest sites, along with invasive House Sparrows (Passer domesticus) and European Starlings (Sturnus vulgaris) (Gillis, 1989). Instructions on deterrence and removal of invasive species can be found here. Bluebird nest-box trails have been implemented to add and monitor nest boxes (Fig. 7). Success is limited by competition with other bird species, but the numbers of nest boxes used by bluebirds has increased markedly since the program began (Guinan et al., 2008). Instructions on nest construction and placement can be found here. 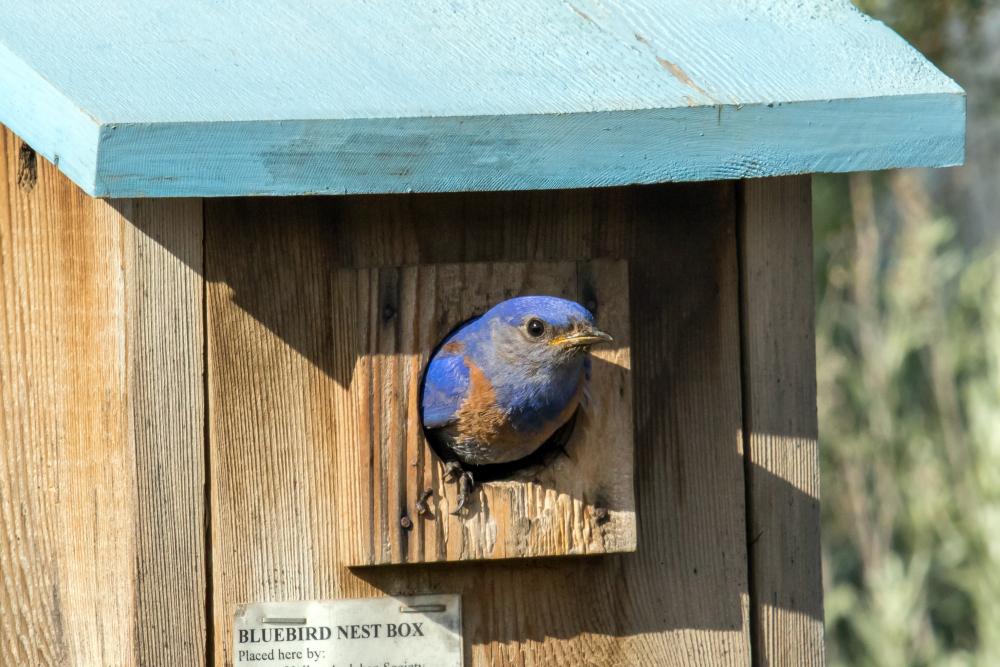 The Cornell Lab of Ornithology (birds.cornell.edu) supports a great citizen scientist network with detailed information on nest construction and placement (nestwatch.org), recommendations on attracting species of interest (content.yardmap.org), and range information (ebird.org). The lab offers many opportunities for the public to get involved with scientific data collection through Project Feederwatch (feederwatch.org), eBird (eBird.org), and Nestwatch (nestwatch.org). Basic species information can be found at allaboutbirds.org, and the Merlin Bird ID app can aid in field identification.