Identification, Diet, and Management of Swallows and Swifts Common on Organic Farms

A growing body of experimental evidence suggests that birds play important roles as natural enemies in agricultural ecosystems. For example, a study conducted in Europe demonstrated the important services provided by Great Tits (Parus major) in apple orchards. Researchers experimentally added nest boxes to some plots and saw an increase in fruit yield from 4.7 to 7.8 kg per tree. Increased yield was attributed to predation of caterpillars by Great Tits (Mols et al., 2002). A review paper by Bael et al. (2008) found that across 48 studies examined, birds reduced arthropods and plant damage. Here we focus on identification, diet, and management of swallows and swifts observed on West Coast organic vegetable farms and discuss their natural pest control services. 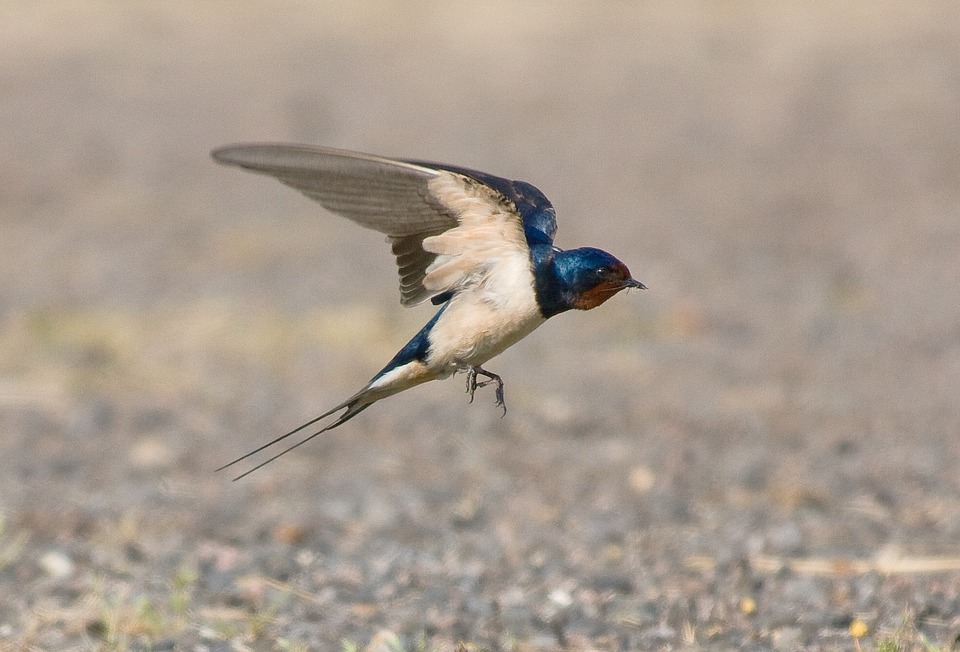 Barn Swallows (Fig. 1) are the most abundant swallow species in the world (Fig. 2; Brown and Brown, 1999) and are present on many farms globally (Kragsten et al., 2009). They are most easily distinguished from other swallows by their long, forked tails which are used for stability during their daring aerial acrobatics (Norberg, 1994). These swallows have blue backs, buffy breasts and bellies, and orange throats and foreheads. 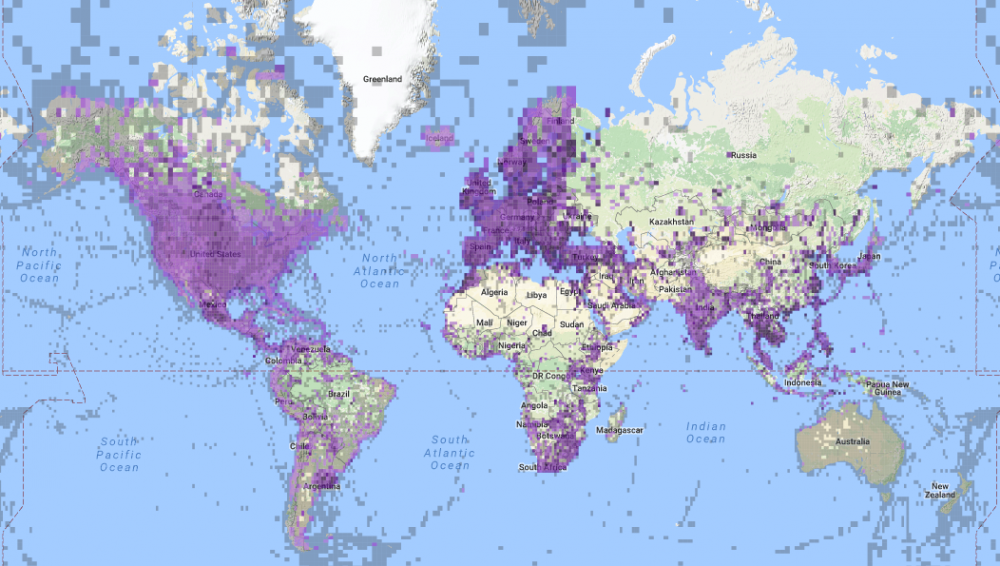 Barn Swallows primarily eat flying insects; in fact, approximately 99.8% of their diet is animal matter. Thermals and convection currents occasionally lift ground insects to an altitude where swallows can consume them (Brown and Brown, 1995). Barn Swallows may be able to significantly reduce crop pest insect populations. For example, a study conducted in Poland (Orlowski et al., 2014) analyzed Barn Swallow nestling faecal sacs and found that 17.8% of the nestling diet was oilseed rape pests, with an additional 5.3% being other arable crop pests. Flies are a preferred food, including horse flies, crane flies, and robber flies. Stinkbugs, leafhoppers, and plant lice are also common prey. Less commonly eaten are ants, bees, parasitic wasps, predaceous ground beetles, ladybird beetles, weevils, dung beetles, and dragonflies. Caterpillars are rarely consumed due to the Barn Swallow's aerial foraging strategy (Beal, 1918). Open areas such as pastures and plowed fields are preferred for foraging. Barn Swallows can often be observed dutifully foraging for pesky insects behind tractors as fields are plowed and planted.

Barn Swallows are one of the few bird species that have benefited from European settlement (Brown and Brown, 1999), but results from the North American Breeding Bird Survey indicate a 1.1% range-wide decline in North American populations from 1966-2012 (Sauer et al., 2014). Similarly, Barn Swallow populations have declined in Europe. The declines are largely attributed to increased pesticide usage, reduction of livestock grazing, reduction of on-farm ponds, and reduction of semi-natural habitats on farmlands (hedgerows, etc.). These changes have resulted in decreased invertebrate abundance and diversity, reducing food availability for adult and nestling swallows (Evans and Robinson, 2004; Kragsten et al., 2009).

As their name implies, Barn Swallows often nest in groups in rafter beams of barns in open cup mud nests (Fig. 3). Some growers will add narrow wooden ledges to walls or under eaves to provide nesting space. Nest removal at the end of the breeding season can help prevent buildup of ectoparasites (Brown and Brown, 2015). Detailed instructions on building and placing nests for native species can be found at the Cornell Lab of Ornithology's website nestwatch.org. However, care must be taken in nest placement because Barn Swallows can be pests when they nest above food processing areas and drop feces. Barn Swallows can vector verocytotoxin-producing Escherichia coli when living in close proximity to livestock operations, although previous studies suggest it is rare (< 2%; Nielsen et al., 2004). Barn Swallows may be exposed after consuming flies that have associated with livestock feces (Hancock et al., 1998). Many growers attempt to discourage nesting using metal spikes in open rafters. 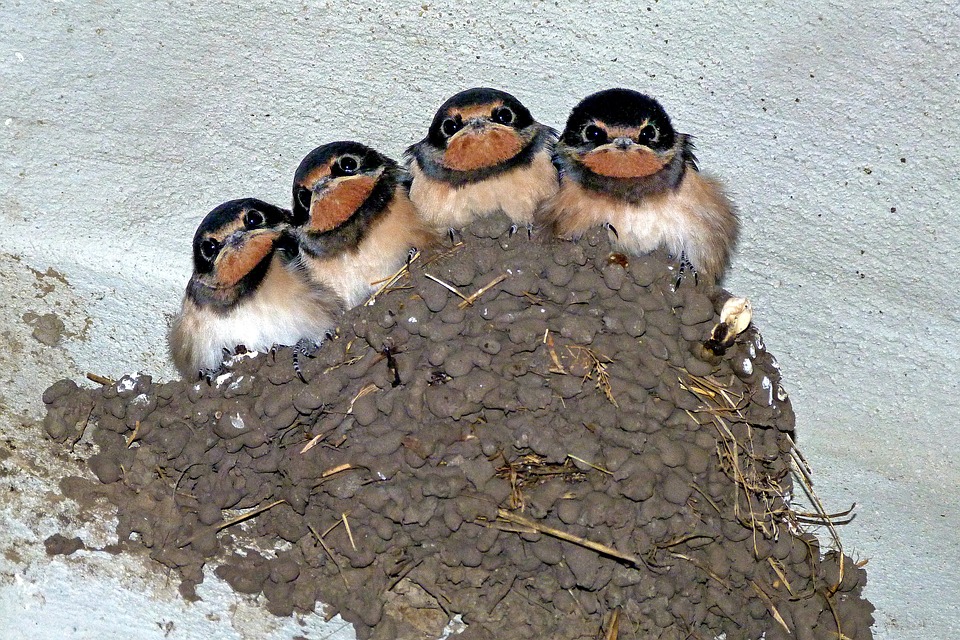 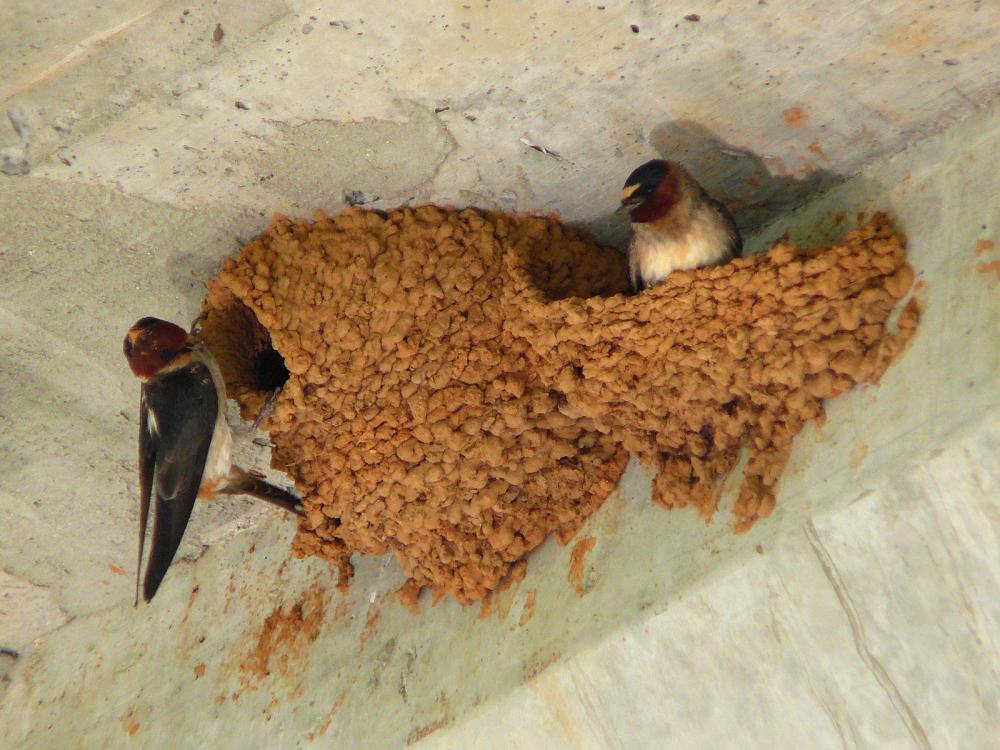 Cliff Swallows are another widespread swallow species similar in appearance to Barn Swallows but lack long tail streamers (Fig. 4; Fig. 5). Cliff Swallows also have a distinct white forehead patch. Nests appear similar to the Barn Swallow but are enclosed rather than open cup (Fig. 3; Fig. 4). Nests are often placed in the eaves of barns. 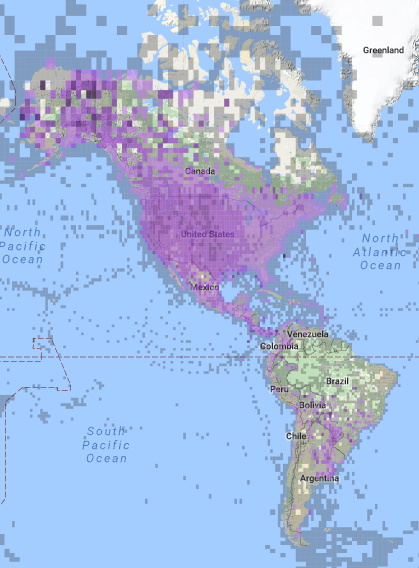 The Cliff Swallow diet is almost entirely animal matter, with less than 1% comprised of vegetable matter. A study across the United States found that beetles were the most common food item of the Cliff Swallow, with 2.67% of the total diet being beneficial beetles such as the ladybird beetle. Like the Barn Swallow, ground beetles are typically not eaten due to the Cliff Swallow's aerial foraging habits. Other common prey include weevils, ants, bees, parasitic wasps, and flies (Beal, 1918). A diet analysis of nestlings found that grasshoppers were the primary food delivered to nestlings, but food came from 84 insect families. While Barn Swallows primarily catch single large-prey items at low altitudes (< 10 m), Cliff Swallows catch many small swarming insects at high altitudes (50 m) (Brown and Brown, 1996). Cliff Swallows commonly forage in open fields and pastures.

Like the Barn Swallow, Cliff Swallows have largely benefited from European settlement (Brown and Brown, 1995), and results from the North American Breeding Bird Survey indicate a 0.4% range-wide increase from 1966-2012 (Sauer et al., 2014). Nest removal at the end of the breeding season can help prevent buildup of ectoparasites (Brown and Brown, 2015). Removal of nests in the fall can also prevent invasive House Sparrows from outcompeting Cliff Swallows. House Sparrows can roost in the nests throughout the winter and establish broods before Cliff Swallows return from migration. House Sparrow removal has been shown to be effective at increasing numbers of Cliff Swallows (Buss, 1942; Samuel, 1969; Krapu, 1986). Instructions on deterrence and removal of House Sparrows can be found here. Like the Barn Swallow, installing wooden ledges can help with nest stability. 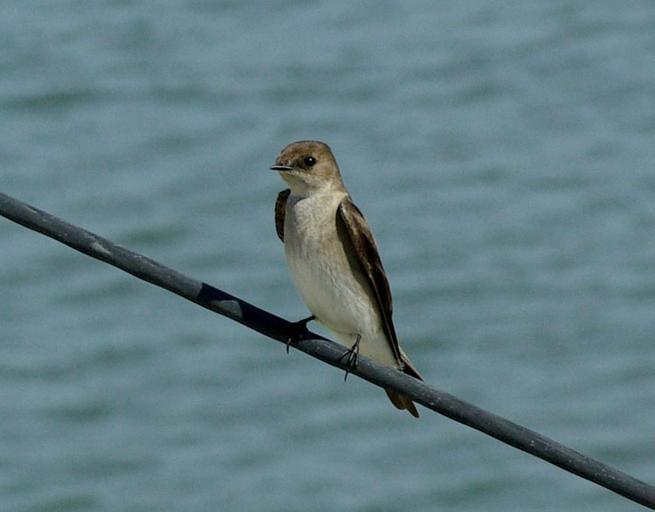 This swallow is a wide-ranging and fairly drab species that is often missed or confused with juveniles of other swallows (Fig. 6; Fig. 7). The plumage is brown on the head, nape, back, and tail and buffy white on the throat, breast, and belly. The most distinguishing feature from similar swallows is that the chest and sides have some brownish gray rather than being solid white. The species' common name comes from the rough edge on outer primary feathers (flight feathers) (De Jong, 1996). 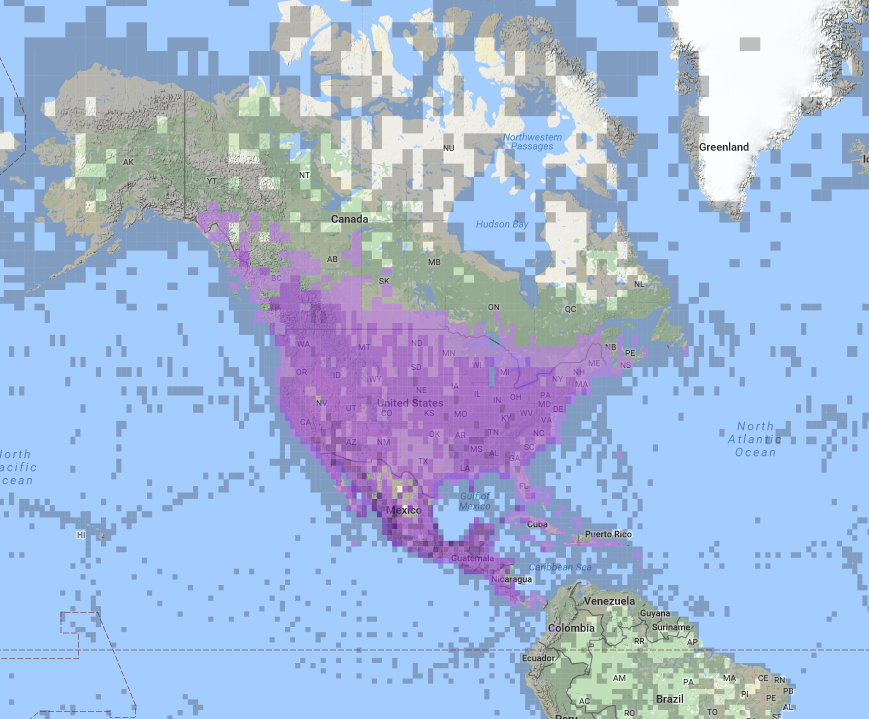 Results from the North American Breeding Bird Survey indicate a 0.4% range-wide decrease from 1966-2012, and declines were primarily in the northern and western parts of its range (Sauer et al., 2014). Northern Rough-winged Swallows occasionally nest in old Cliff Swallow nests but more often nest on bridges or in burrows in cliffs, ledges, and banks dug out by other species (Beal, 1918; DeJong, 1996). Like the Cliff and Barn Swallow, human development has increased usable nesting space. One study found that most Northern Rough-winged Swallow nests (54%, n = 224) were found in human created structures such as railroad cuts, landfills, and gravel pits (Campbell et al., 1997). 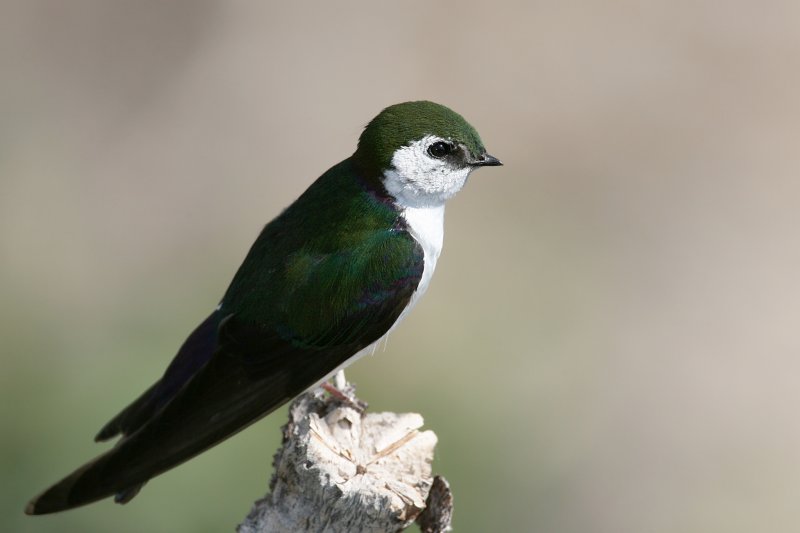 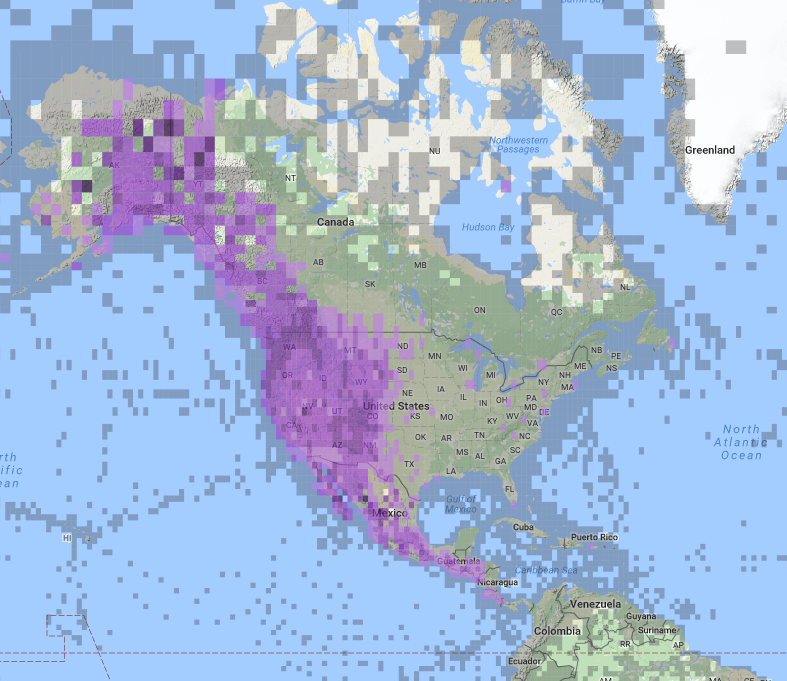 Results from the North American Breeding Bird Survey indicate a 0.4% range-wide decrease from 1966-2012 (Sauer et al., 2014). This species is a tree cavity nester, so conserving and restoring copses of trees will help provide for their nesting requirements. This species will also use nest boxes placed near fields, trees, or cliffs. Nesting locations are often a limiting resource, so providing nest boxes can be important for attracting cavity nesting insectivores. Instructions on building and placing swallow nest boxes can be found here and here. Additionally, many businesses sell pre-made boxes designed for swallows. Nest boxes should be cleaned out every year. Like with Cliff Swallows, introduced House Sparrows can outcompete Violet-green Swallows for nest space or destroy their eggs. Removal and deterrence of sparrows can aid in successful rearing of swallow chicks (Edson, 1943). 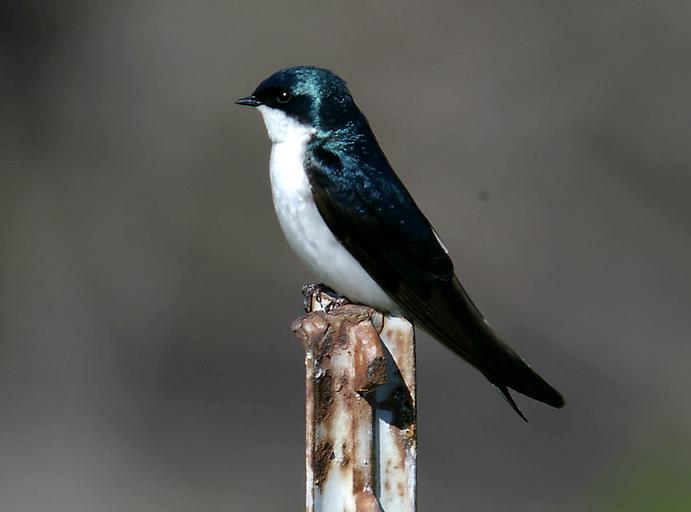 Tree Swallows are a widespread species with iridescent blue on their head, nape, back, tail coverts, and wing coverts (Fig. 10; Fig. 11). The wings fade into dark gray. The throat, breast, and belly are white. The tree swallow lacks the distinct white tail coverts of the Violet-green Swallow, and the white on the face ends below the eye. 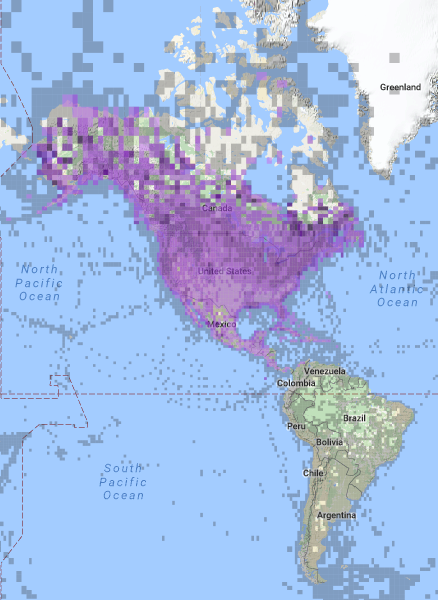 Results from the North American Breeding Bird Survey indicate a 1.2% range-wide decline from 1966-2012 (Sauer et al., 2014). Availability of nests is thought to be a contributing factor (Winkler et al., 2011). Tree Swallows unsurprisingly nest in tree cavities. Like the Violet-green Swallow, they are secondary cavity nesters, meaning they rely on species such as woodpeckers to make the nests they use (Winkler et al., 2011). Tree Swallows will also nest in human-made nests and often nest in bluebird boxes (Fig. 12; Beal, 1918). Visit here or here for detailed instructions on placement and construction. Nests should be cleaned annually. 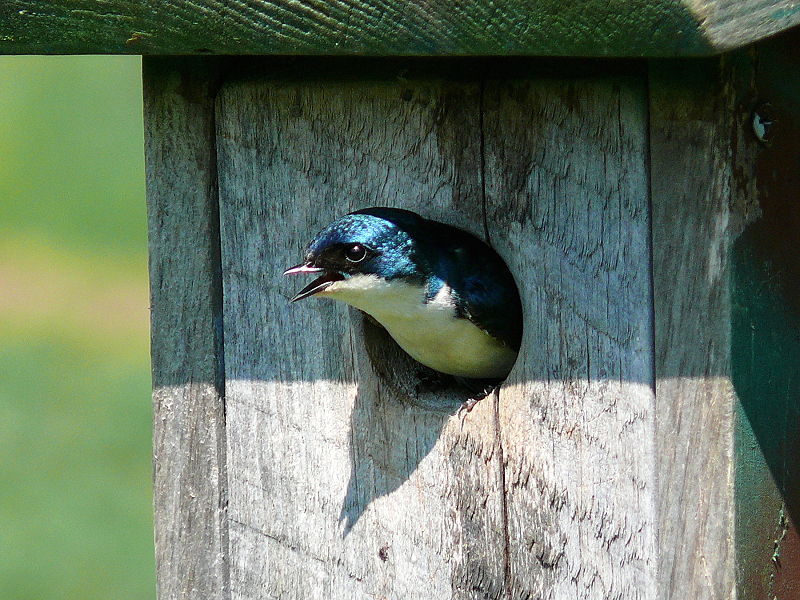 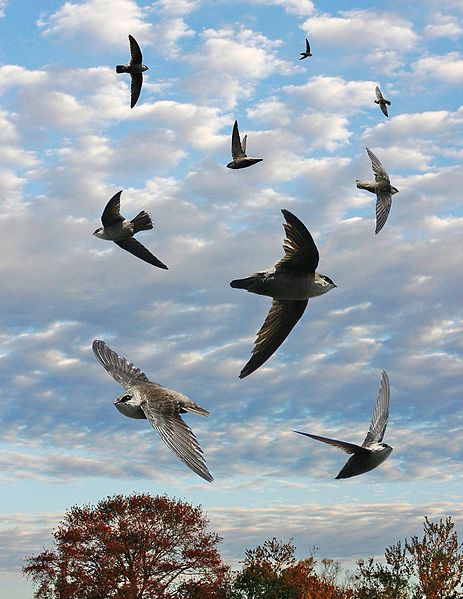 Though the Vaux's Swift is often confused for a swallow, it is taxonomically quite distinct. Swifts are in the order Caprimulgiformes with the nightjars, whereas swallows are in the order Passeriformes with the perching birds. The swifts were formerly placed in the same order as the hummingbirds, Apodiformes, which means “without feet,” based on similar morphology. As the taxonomic name implies, swifts have short legs with tiny feet, distinguishing them from the swallows. Swifts also have fast flapping speeds and more closely resemble bats in flight than swallows. The Vaux's Swift has drab gray/brown plumage and a very short tail (Fig. 13). Like the woodpeckers, swifts have stiff tails to aid in perching on vertical surfaces (Bull and Collins, 2007). The Vaux's Swift is found in Western North America (Fig. 14). 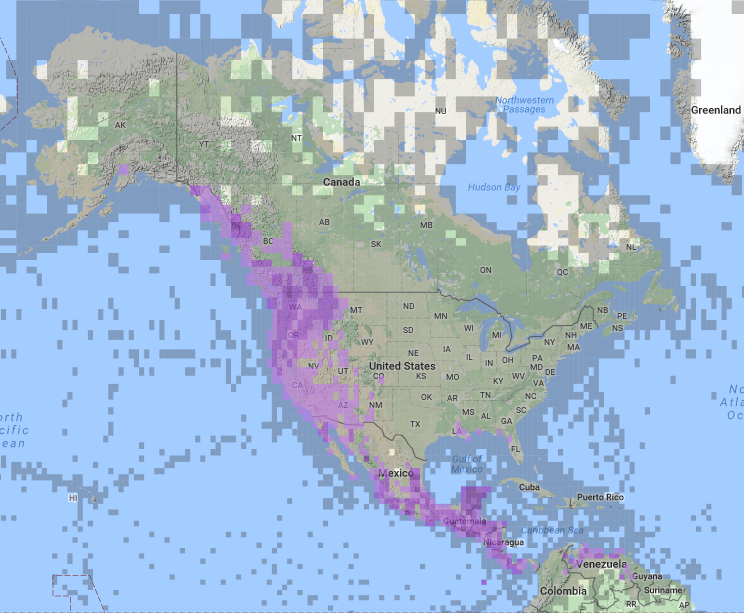 A study conducted by Bull and Beckwith (1993) analyzed food boluses delivered to nestling Vaux's Swifts and found the primary constituents were hoppers, aphids, whiteflies, flies, mayflies, ants, and parasitic wasps. One pair fed an average of 5,344 arthropods to their nestlings per day, totaling 154,976 arthropods during the nestling growth period! The study also used a technique called radio-telemetry to monitor Vaux's Swift foraging behavior and found Vaux's Swifts foraged primarily in forests and over water.

Results from the North American Breeding Bird Survey indicate a 1.3% range-wide decline from 1966-2012 (Sauer et al., 2014). The Vaux's Swift is strongly associated with old growth forests (Manuwal and Huff, 1987). Vaux's Swifts are rarely observed on farms but have been observed foraging on farms with abundant surrounding forest. Hollow trees provide the majority of nest and roost sites, but chimneys may occasionally be used. Suitable cavities are created when one of several living tree species (Grand Fir [Abies grandis], Western Larch [Larix occidentalis], and Western red cedar [Thuja plicata]) with sufficient diameter at breast height have heart-rot fungi invade the heartwood. However, logging has resulted in a reduction in suitable trees for swifts, along with other notable species like the Spotted Owl (Strix occidentalis). Further, the number of chimneys have declined. Protection of forests and the use of nest boxes may aid in conservation. Bull (2003) describes here a nest box design that can be used.

The Cornell Lab of Ornithology (birds.cornell.edu) supports a great citizen scientist network with detailed information on nest box construction and placement (nestwatch.org), recommendations on attracting species of interest (content.yardmap.org), and range information (ebird.org). The lab offers many opportunities for the public to get involved with scientific data collection through Project Feederwatch (feederwatch.org), eBird (eBird.org), and Nestwatch (nestwatch.org). Basic species information can be found at allaboutbirds.org, and the Merlin Bird ID app can aid in field identification.